Investors Are Becoming Bearish, But “Not Bearish Enough”? – ValueWalk Premium 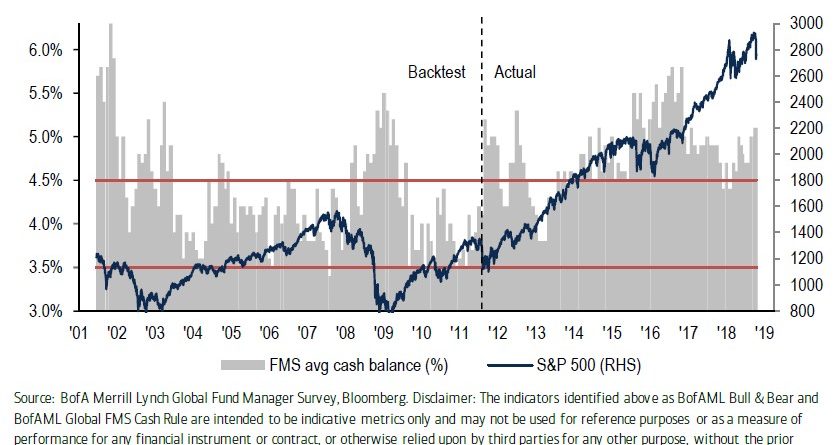 Investors Are Becoming Bearish, But “Not Bearish Enough”?

The S&P 500 continued to slide on Thursday, although it remained about 40 points higher than the recent low on Oct. 11. Meanwhile multiple investment banks continue to argue that the selloff is nearly over and reassure investors by saying it's time to dive back into growth.
Bull & Bear Indicator holds steady
Bank of America Merrill Lynch analysts admitted in a report on their October Fund Manager Survey that investors are bearish but added that they're "not bearish enough to signal anything but a short-term bounce in risk assets."

BAML Chief Investment Strategist Michael Hartnett and team said the Fund Manager Survey cash level held steady at 5.1% this past week, which is a bit higher than the 10-year average of 4.5%. That places their Bull & Bear indicator in a contrarian buy area at 3.3. The BAML team said they would sell any rallies which occur during the fourth quarter.

Pfizer Inc. (NYSE:PFE) has moved one step closer to approval of a drug that will improve options in the treatment of Rheumatoid Arthritis. An advisory panel specializing in arthritis... Read More

Having A Good Mentor Can Make All The Difference

Here is an excerpt from Asiaone Business on how having a good mentor can make all the difference and discusses Clive Tan's Value Investing For Employees. There are many ways to... Read More

The Syrian civil war is triggering the first withdrawal from a doomsday-designed protective vault that houses over 860,000 varieties of various seed types. The event has garnered significant media attention... Read More

By Long Short Trader On Monday, July 15,2013, Roddy Boyd of the Southern Investigative Reporting Foundation published an excellent piece (worthy of a prize, if you ask me; PLEASE READ IT... Read More

Wells Fargo & Co (NYSE:WFC) was one of the banks presenting at the US Large Cap Banks 2013 BAAB Conference. A recurrent theme at the conference was banks’ emphasis on... Read More

Activism Across The Atlantic: Sherborne Scoops 10% Of PE Firm Electra

Edward Bramson’s Sherborne Investors has accumulated a 10.24% stake in Electra Private Equity Plc (LON:ELTA) which is an investment trust listed on the London Stock Exchange and focused on... Read More

October could end up being a largely negative month for hedge funds with one notable exception. In the latest hedge weekly it is easier to count the small number of... Read More

Notes from The Invest For Kids Conference with an all-star line up including Sam Zell among others. Pitches include LONG SRG, short DPZ, long HTZ,  much more is coming... Read More