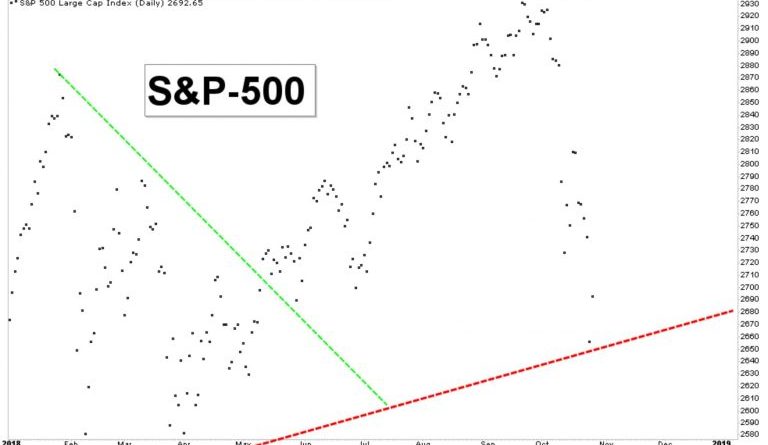 MarketCycle’s GOAL: To always hold the strongest globally diversified assets in client accounts; this can be done via six methods:

MarketCycle uses all six and as far as we know, no one else is doing this. Strong assets drop a little more during corrections but they go up a lot more during the good periods of bull markets, so long-term they can really pay off. Strong stock assets should be balanced in the portfolio with low volatility stock assets such as high momentum consumer-staples stocks or even floating-rate REITs.

CORRECTIONS… Just before the recent (first) 800 point Dow drop, MarketCycle sent a rare private email to clients saying that the market was about to drop, that it would be like a falling knife, fast and “V” shaped and impossible to hedge or to catch the falling knife at the bottom without being hurt. This was like scenario #1 below. So, our plan was to do nothing except to patiently stay invested in the strongest assets because the most likely future outcome was a continuation of the bull market.

INVESTORS HATE RANDOMNESS… The human mind hates randomness so when it sees dots, either in the sky or on a sheet of paper or on a computer screen, it wants to connect the dots in order to create something meaningful. There is an entire branch of investing that revolves around Technical Analysis and it has literally millions of adherents. They, in unison and trading with millions and millions of dollars, literally connect dots in order to turn a random chart pattern into something that gives meaning to their brain and then they trade in the financial markets using that new pattern. When these millions of traders move in unison, they create a “self-fulfilling prophecy” that comes true because millions moving in unison, at the same time, MAKE it come true.

These traders first see this: 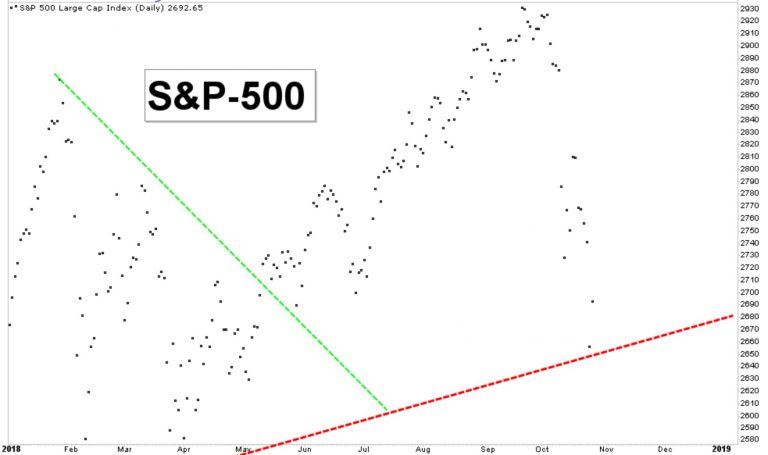 And then they connect the dots and turn it into the chart below (shows as of October 25, 2018 during early afternoon EST as I write this blog). Then, drawing a line from the market lows in February and April and extending the line out into the future caused them to buy in unison when the market touched the red-dashed line for the third time (on Wednesday). That’s it. That’s all there is to it. A self-fulfilling prophecy that literally moves the market. Notice how the day after the market touched the red-dashed line for the third time, they bought and moved the market higher again? This doesn’t mean that the line will hold since actual market movement depends on entirely different factors than people drawing lines on a chart. Even though the market is up today (Thursday), I actually expect the market to go lower before recovering since the weak hands have not been shaken out and no sense of panic has yet ensued (causing people to sell in order to escape their pain) and there has been no capitulation. We are close but not yet there… and, in my opinion, we are still in a bull market and this will eventually be behind us!

Professionals need to be aware of what the ‘technical’ traders are likely to do and they need to know this ahead of time since it controls much of the short-term movement of the market. 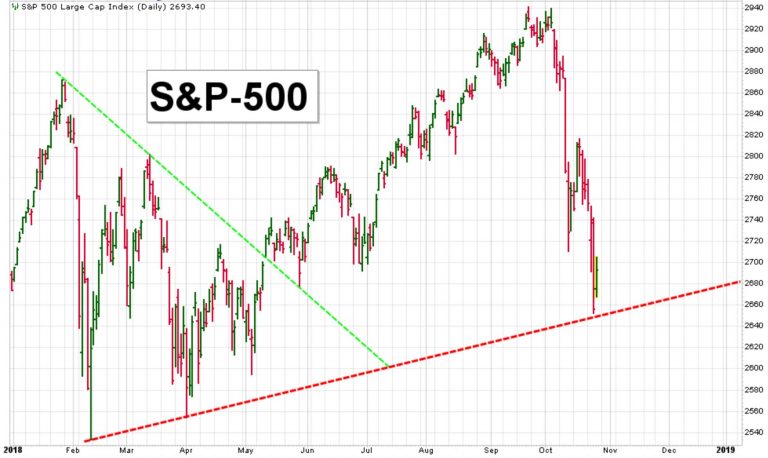 MarketCycle Wealth Management is in the business of navigating client’s investment accounts through the ups and downs of bull and bear markets, for a low cost, and the first 3 months are at no charge. It’s easy.

This free monthly blog is available via the easy sign up on the web page. No spam guaranteed.

Our daily (paid members) site, MarketCycle Wealth REPORT, is available via the link on our website.

Kevin Duffy, Co-Founder and Principal at Bearing Asset Management predicts a vicious bear market in equities and hints which stocks are going to be most vulnerable in the coming... Read More

The latest from Whitney Tilson's email to investors Get The Timeless Reading eBook in PDF Get the entire 10-part series on Timeless Reading in PDF. Save it to your desktop, read... Read More