The actor, Tom Cruise, is as enigmatic as the U.S. stock market. He has made many terrific movies over the years and today’s stock market reminds us of his classic sports movie, Jerry Maguire. Jerry was a top sports agent for a large agency and then suddenly, out of nowhere, was dumped out on the street with one client and a top college recruit to work with.

Stock pickers like us were very popular from 2011-2015. We provided optimism to advisor’s who needed it and our quality/value approach found alpha. However, a big trend developed in 2016-2018 and the stock market went all-in on revenue growth stories, especially in technology stocks. These companies garnered the vast majority of the gains made as the stock market extended its bull run.1 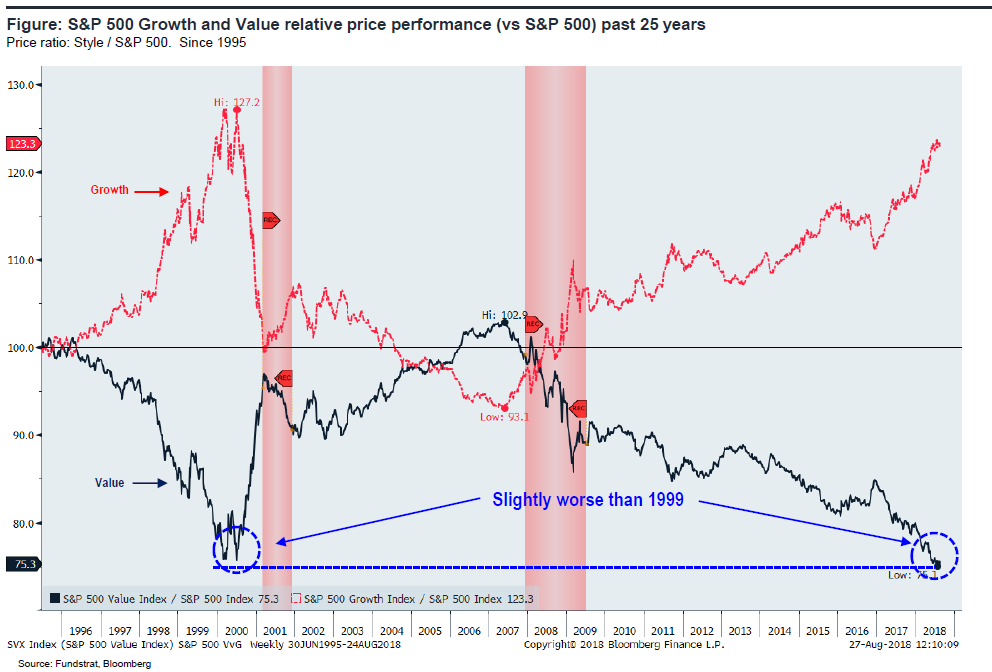 Many investors have kicked value strategies and active stock pickers out of their agency. As a result, the money in the stock market has flowed to the ETFs tracking the S&P 500 Index and those chock-full of glam tech favorites like the QQQ, which owns the 100 largest NASDAQ stocks.2 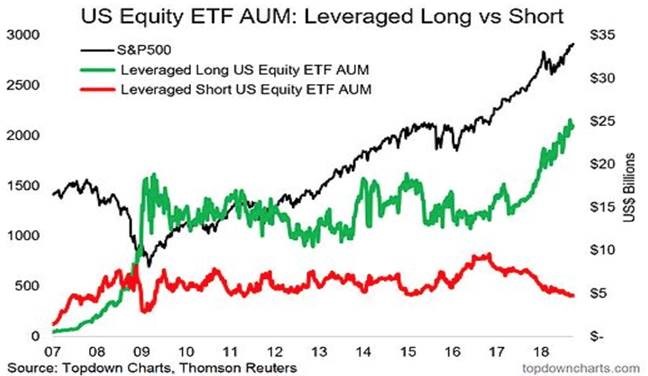 Maguire reacted like many of our value peers. He chased after a player he thought would be the number one draft pick, only to find out that he and his family had signed up elsewhere. As the chart below shows, the top draft picks in the stock market are historically overpriced.3 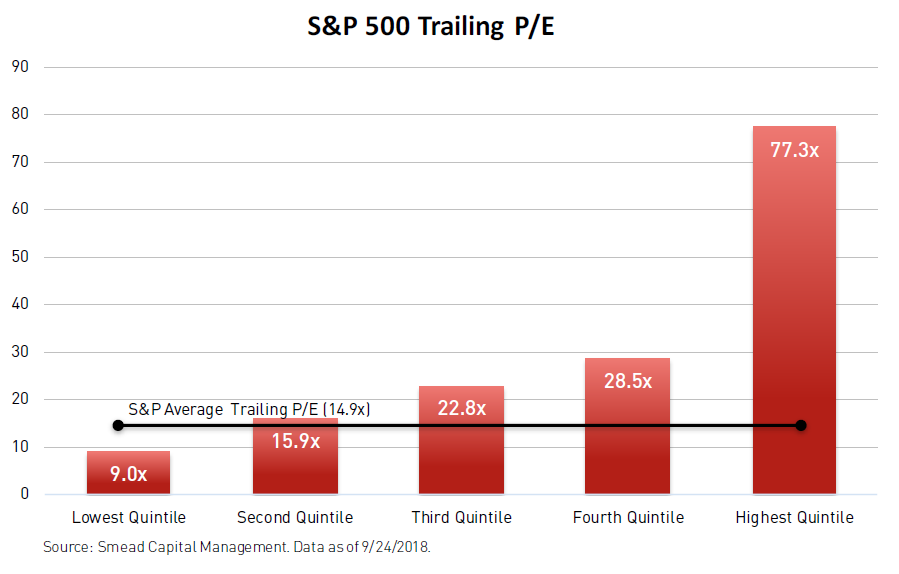 Many value managers have rationalized the mania surrounding the FAANG stocks (Facebook, Amazon, Apple, Netflix and Google parent Alphabet) and bought the least egregious ones in large quantities. When you try to squeeze the last profits out of an over-extended trend in a stock market mania, managers tend to go outside of their discipline for stock selection. We believe the discipline of buying quality merchandise, when it is out of favor, is what made them successful in the first place.

Jerry still had his skills, but his style of shepherding athletes was very out of favor. When the first-round draft pick dumped him, Jerry hit bottom. He was left with one undervalued athlete, Rod Tidwell. Tidwell, along with Jerry’s new girlfriend, reminded Jerry of the values which really matter in life and in business. We at Smead Capital Management don’t need to be reminded of our values or to keep to our discipline.

Rod Tidwell was an under-sized wide receiver with a good track record. His contract was coming up and he wanted his agent to validate his value in the marketplace. He repeated his plea to Jerry repeatedly by saying, “Show me the money!” Rod was annoying, but he was loyal. He had been in the league long enough to know what matters in the long run and he knew he was very undervalued. Our stocks which look like Rod include:

There are a few things we think we know after running our portfolio for over ten years. First, like Rod Tidwell, we have done well for our team (investors) and have not deviated away from our discipline. We buy companies which screen well for quality when they get deep in the dog house (are willing to catch passes across the middle). We waste no time chasing or worrying about expensive first round draft picks and will not get trapped late in a stock market trend tempting fate by hoping that extremely popular securities will stay popular forever! History shows that even mega-successful companies like Coca-Cola and Disney hit the wall for many years after an unbelievable run in the stock market that ended in a mania in 1972 known as the “Nifty-Fifty.”4 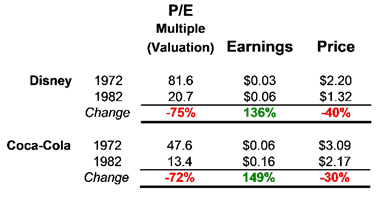 History rhymed in 1999 when the tech bubble became a massive mania and mega-successful companies like Microsoft, Intel and Cisco became the darlings. They were considered the “safe way” to play glam tech in the late 1990s as the internet captured our imaginations. The chart below shows their meteoric rise and ultimate collapse in 2000-2003. Notice that 15 years later, not one of them returned to the price that their shares hit in early 2000. 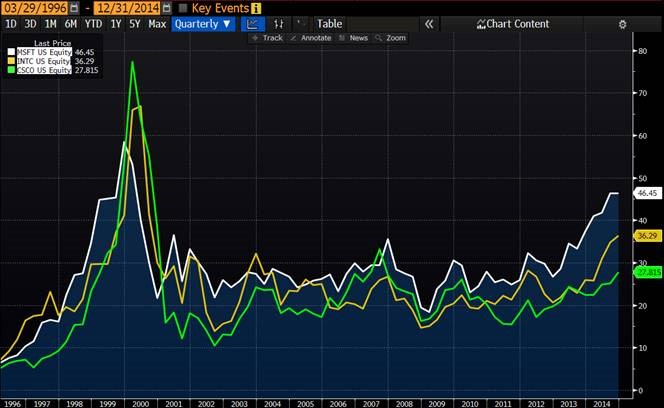 We own numerous stocks which look as undervalued as Rod Tidwell, and our portfolio looks as cheap to the Russell 1000 Value and the S&P 500 as Rod did in the movie.5 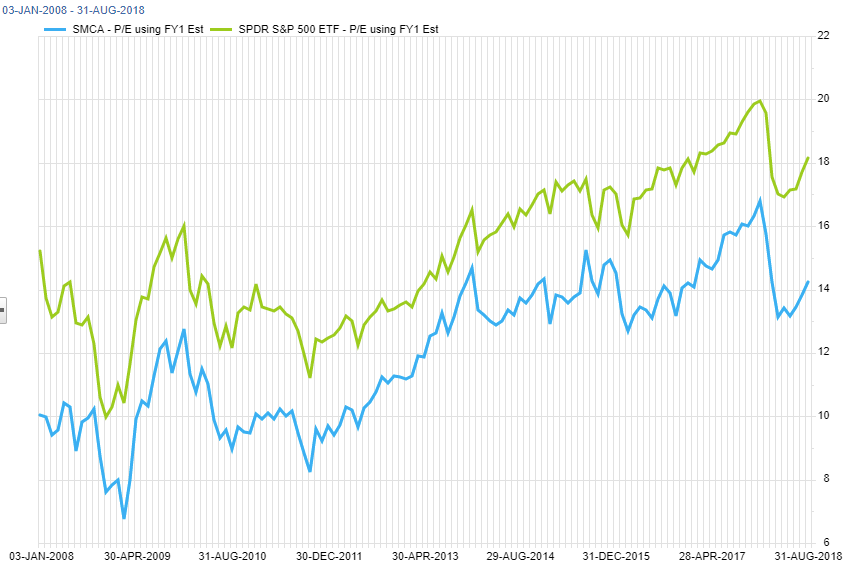 To summarize, we feel like Jerry Maguire, because our investment discipline is temporarily out-of-favor and we view our portfolio as loaded with Rod Tidwell-like common stock holdings. We don’t get to know when the over-priced first round draft picks will hit the skids or when Rod Tidwell will go crazy on Monday Night Football. We also don’t know when the over-extended market darlings will disappoint the investors who are overcommitted to them. We do like relying on our eight criteria for stock selection and the fact that we believe our risk adverse discipline will come back into favor. After all, we hope we had you at “Hello.”

The price-earnings ratio (P/E Ratio) measures a company’s current share price relative to its per-share earnings. Margin refers to sales minus cost of goods sold. Beta tests are a trial of machinery, software, or other products, in the final stages of its development, carried out by a party unconnected with its development.

The information contained herein represents the opinion of Smead Capital Management and is not intended to be a forecast of future events, a guarantee of future results, nor investment advice.

This newsletter contains general information that is not suitable for everyone. Any information contained in this newsletter represents SCM’s opinions, and should not be construed as personalized or individualized investment advice. Past performance is no guarantee of future results. There is no guarantee that the views and opinions expressed in this newsletter will come to pass. Investing in the stock market involves gains and losses and may not be suitable for all investors. Information presented herein is subject to change without notice and should not be considered as a solicitation to buy or sell any security. SCM cannot assess, verify or guarantee the suitability of any particular investment to any particular situation and the reader of this newsletter bears complete responsibility for its own investment research and should seek the advice of a qualified investment professional that provides individualized advice prior to making any investment decisions. All opinions expressed and information and data provided therein are subject to change without notice. SCM, its officers, directors, employees and/or affiliates, may have positions in, and may, from time-to-time make purchases or sales of the securities discussed or mentioned in the publications.

When the market drops sharply, as it did last week, investors get the chance to buy great companies at a discount. This company has an unprecedented history of growth... read more

Quantitative tightening has been running at full speed for almost 5 months now (and for a total period of 17 months since commencing in October 2017), and with QT finally... read more

When looking at the US foreign policy landscape, Dick Bove, banking analyst from Rafferty Capital Markets, notes the emergence of the BRICs nations. It is here Bove sees an emerging... read more

The recent flash crash in the gold market, first reported by ValueWalk on January 6, is now being attributed to an intentional high frequency trading (HFT) algorithm and not... read more

Robotti on How to Develop A Value Investing Mindset [VIDEO]

Bob Robotti on how to develop and nurture a value investing mindset. read more

Sources of Edge in Small-Cap Investing