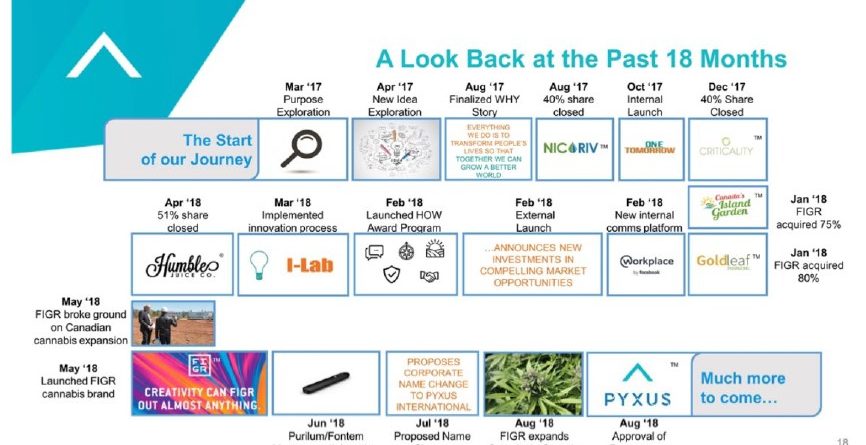 Altria is in talks to buy a stake in Aphria shows the maturation of legacy tobacco. PYX to be the greatest beneficiary.

A Change in Narrative brings a change in multiple

Earlier this year Pyxus went through a name change (quite unlike the rest of its Canadian counterparts, it was not done for stock promotion) The name change represented a pivot from traditional tobacco to a strategy focused on legal Cannabis/hemp production for the long term. A pivot that is now being vindicated by Altria’s interest in the space. Could it be possible that PYX’s transition has inspired Altria, we’ll leave that for you to consider.

PYX owns majority stakes in two Canadian licensed cannabis producers and has received its ACMPR cannabis cultivation license from Health Canada as part of the company’s “one tomorrow” transformation. 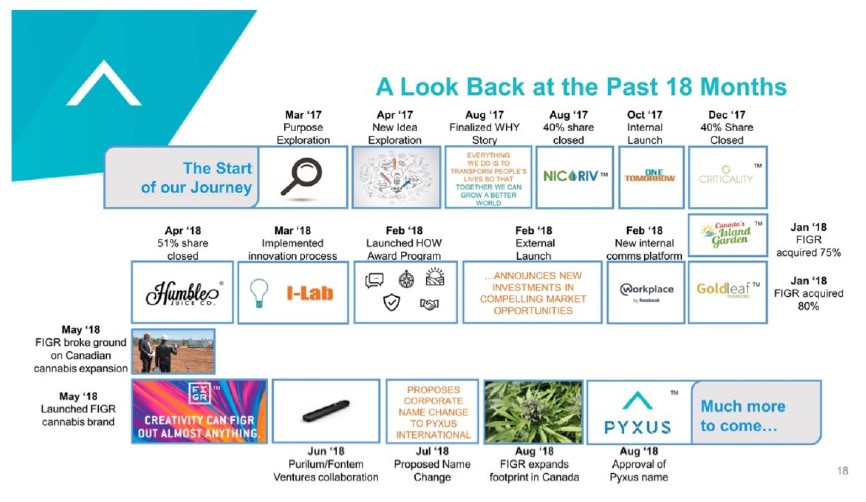 What we think is interesting about PYX is that the legacy tobacco business is covered by the current valuation and as an investor, you get free upside on a real cannabis business.

Put another way, assuming PYX’s legacy tobacco business is worth $500 million (which covers the debt and half the equity when you remove inventory and AR), the cannabis opportunity is only valued at about $150 million. Given yesterday’s news, this makes the risk/reward for Pyxus very compelling especially as Altria gets involved with Aphria formally at a $5 billion valuation or you can instead by this call option in Pyxus.

Beyond Pyxus relationships with over 300,000 farmers relationships globally, it has proprietary technology called SENTRI that assures stability and quality of plants for customers like Phillip Morris and a data management tool called Grower Management System (GMS) that amalgamates farmer information to ensure compliance. As legalization of cannabis will bring a need for technological and compliance controls, Pyxus’s Sentri and GMS systems are beyond anything we see from the Canadian LPs currently.

What does this mean: unlike Aphria and its counterparts, Pyxus is unlikely to have execution risk because they know how to operate a successful business.

The board of directors is particularly impressive at PYX is stacked with agriculture and tobacco pedigree.

These are the ones who are guiding the pivot to Cannabis, you cannot discount their intentions or their ability to execute.

Note: There is not one major former tobacco/agribusiness executive on the board of CGC, TLRY, or CRON

We are short many names in the Canadian Cannabis space and believe that Pyxus is a perfect hedge. The story is not dependent on Canadian recreational market and management has clearly laid out a 5-year plan, this story can have legs, yet its traditional tobacco business did $170M in adj. EBITDA in FY2018 with 97% from its legacy tobacco business which has proven to be a resilient business. Even if management does not fully achieve its GSP target, the company has a solid underlying business that has value.

Based on latest publicly announced expansion plans, production capacity is increasing from 44k sf to over 1 million sf…around the same size as Tilray with 1/10 of the market cap.

In the last 12 months, CGC, TLRY, and CRON have generated slightly over $100M in combined revenue while PYX alone generated almost $2B. Despite this large discrepancy, PYX only has a market cap of about $350M while the others each have multi-billion-dollar valuations. As of 6/30/18, adjusted net debt was $709M (debt minus cash minus seasonal borrowings supported by committed inventory), so EV is only about $1B.

Provincial supply agreement has been overlooked by market

Cannabis production capacity has been overlooked by market

Based on latest publicly announced expansion plans, production capacity is increasing from 44k sf to over 1 million sf…around the same size of Tilray with 1/10th the market cap and more know how and global exposure.

At the company’s investor day last month, PYX included a slide on the future split between its legacy tobacco business and global specialty products (e.g., cannabis, CBD, e-liquids) that based on our estimates implies total adj. EBITDA of about $500M in FY2023. Even if the business traded at a blended multiple of 7-8x (i.e., discount to PM which trades at 10x and CGC which trades at 15x), this would imply a stock price of $280, while we do not suggest the stock is going there, the numbers are the numbers 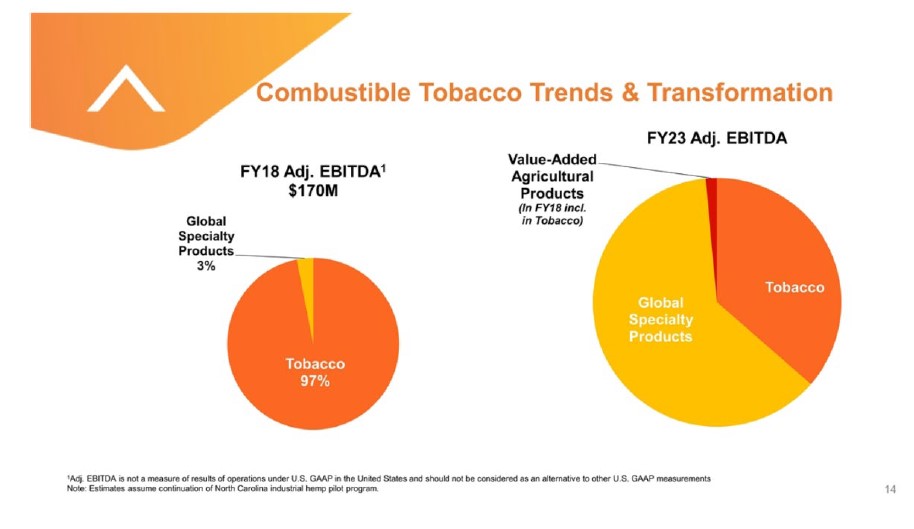 PYX hired Bryan Mazur, former executive that was at Dr. Pepper Snapple Group for about 20 years, earlier this year as executive vice president of its GSP division. PYX is hiring the right people to grow their CPG business and shows management’s understanding of the need to develop brands in the cannabis industry. Mazur could also potentially leverage his relationships to get PYX a beverage deal in the future.

Learning from Tilray, PYX is likely to follow in its footsteps given it has just as tight a float. CGC has a float of 224M shares, CRON has 166M shares, TLRY has 10M shares, and PYX has 8M shares. When excluding shareholders that own 5% or more of shares outstanding, PYX’s float is 4M shares.

Short interest is at all-time highs at 12% of Bloomberg estimated float. When excluding shareholders that own 5% or more of shares outstanding, short interest is 23%.
Cautious Investing to All

Marc Faber: "I Don't Believe That Stocks Are Going Down Because Of Greece"

Despite Authoritarian Turn In Turkey, UBS Still Bullish; Other Banks Not So Sure

The failed coup attempt in Turkey, resulting in one of the largest purges in democratic society’s history, has not changed the regional economic outlook to any meaningful degree, a UBS... Read More

Patient Investors Prioritize People And Profits When Picking Who To Back

Patient Investors Prioritize People And Profits When Picking Who To Back by EY Strength and breadth of core management team still most important factor influencing which private companies attract... Read More