What Do Auto Price Earnings Ratios Tell Us? – ValueWalk Premium 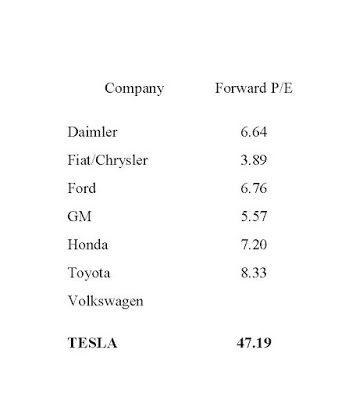 With Tesla’s new-found profitability, for the first time it is possible to compute meaningful P/E ratios and to make comparisons with other auto manufacturers.  To do so I assume that Tesla earns the same $1.75 per share for the next four quarters.  Some might say it should be more because Tesla is a growth company.  Others may say it should be less because Tesla pulled out all the stops to be profitable in the third quarter, including selling only high margin Model 3s.  Those of you who disagree can alter the table below to reflect your own assumptions.

The table reports the forward P/E ratios for Tesla and the other major auto manufacturers.  The first thing to note is that all the major manufacturers tend to trade around a forward multiple of 6.  Toyota is a bit higher at 8.33 and Fiat/Chrysler is a bit lower at 3.89, but not of them approach double digits.  In contrast, Tesla’s multiple is 47.19.  While one would expect Tesla’s multiple to be higher because of its greater growth opportunities, the gap is so large that it appears as if Tesla is in a different business.  It seems hard to believe that as Tesla matures its multiples will not drop toward the industry average.  If that happens, the growth in earnings will have to be dramatic to maintain the current stock price.

BoA: ECB Unleashes Quantitative Easing For The World! The effects of the ECB’s corporate bond buying spree could potentially be much greater than initially anticipated and could be equivalent of... Read More

Ben Graham: The Einstein of Money

In 1934, Benjamin Graham revolutionized the investment world with the publication of his book Security Analysis. “The Value Bible,” as modern investors affectionately call it, contained Graham's accumulated wisdom... Read More

As weeks of market volatility and dynamic fund flow movements culminated in the confirmation of QE tapering, investors guided funds back into equities focusing on DM equity funds in... Read More

Anchoring Heuristic And The Equity Premium Puzzle Hammad Siddiqi University of Queensland November 1, 2015 Abstract: We model a scenario in which investors face Knightian uncertainty in relatively newer stocks and use... Read More