What goes up, must come down.

Over recent years, there hasn’t been a safer bet than big tech – specifically the FAANG stocks, which include Facebook, Apple, Amazon, Netflix, and Google’s parent company Alphabet.

But in the financial world, this feeling of euphoria can be turned upside-down very quickly.

Since the summer, the five tech giants combined have lost close to $1 trillion in market capitalization from their peaks. Now the FAANG stocks have officially slipped into a bear market, with investors blaming rising interest rates, slumping sales forecasts, possible government intervention, and bubble-like valuations as reasons for the reversal in fortune. 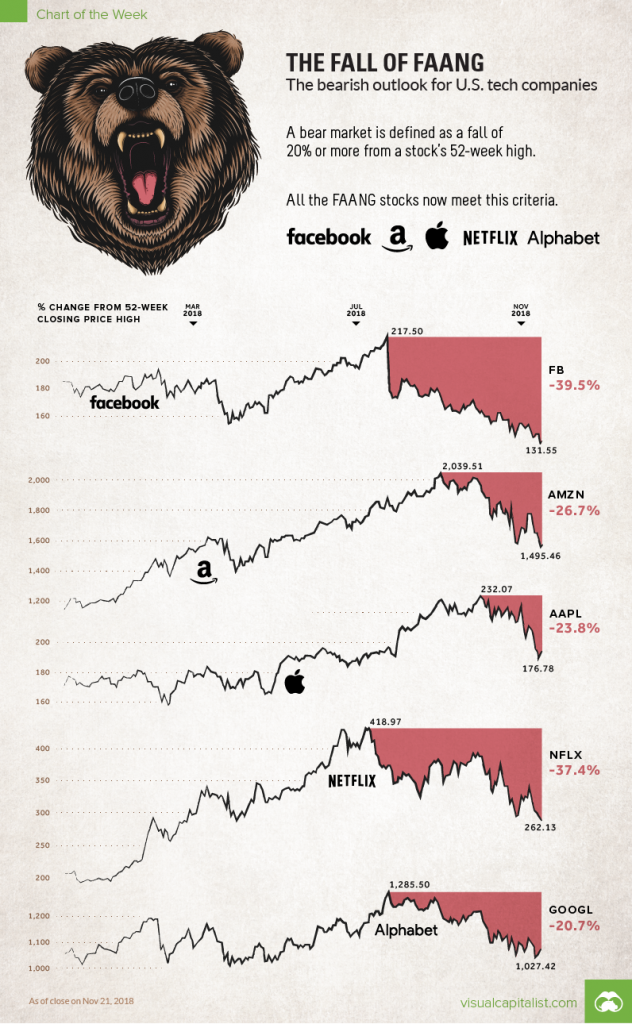 The generally accepted definition of a bear market is a 20% or greater decline from recent market highs.

Facebook and Netflix have been in bear territory for months, but the remaining members of FAANG only just recently capitulated. Apple was the last to go – but with -24% in lost value since its peak on October 3, it is now in trouble as well.

Interestingly, this is the first time that the FAANG stocks have been in a bear market together, meaning this is uncharted territory for big tech and the wider market as a whole.

After the Gold Rush

While FAANG represents a small fraction of tech stocks available on the market, they do make up a significant percent of indices like the S&P 500 or the Nasdaq Composite. As a result, this slump can impact the rest of the market – and it manifests a more general malaise that other, less-beloved tech stocks must deal with.

Unsurprisingly, the Nasdaq Composite – a technology bellwether – is feeling the pain as well:

The sentiment can also be seen in other tech names, some which have been slumping for awhile and others which have fallen into a funk only recently:

Even SaaS darlings like Salesforce.com can’t shake the trend – the stock entered bear territory itself on November 19th.

Why have investors soured, at least temporarily, on the tech stock universe?

There are multiple narratives floating around, but the general gist is something like this: the current bull market in stocks is nine years long, and at some point the party will come to an end. Because the FAANG stocks traditionally trade at very generous valuations, they are likely to come back down to earth as economic conditions deteriorate.

Further, the fears around FAANG stocks are seemingly being confirmed by recent news. For example, there are reports of Apple slicing orders for iPhones, a stagnant Facebook userbase, and other growth hurdles being experienced by these companies – and these reports are helping to fan the flames.

Some experts see the slump as an opportunity to load up on discounted tech heavyweights – while others, such as early Facebook investor Jason Calacanis, say it is possible that the social network has already experienced its “Yahoo peak” in terms of relevance and valuation.

Twenty years ago there was no question what areas of the world markets paid most attention to.  The United States.  The U.S. economy was by far the largest in... read more

Larry Robbins' Glenview Capital is attempting a shakeup at Health Management Associates Inc (NYSE:HMA). In an open letter to other shareholders of HMA, Robbins intimates that his firm has started a... read more

The popular user-review website Yelp is ready to join the public markets this spring. It will try to raise up to $100 million in its upcoming IPO. In a regulatory... read more

Today, Better Homes and Gardens Real Estate has revealed findings of its latest survey of Baby Boomers, shedding light on the retirement outlook, financial mindset and lifestyle preferences of the nearly... read more