Jeremy Siegel is the Russell E. Palmer Professor of Finance at the Wharton School of the University of Pennsylvania and a senior investment strategy advisor to Wisdom Tree Funds. His book, Stocks for the Long Run, now in its fifth edition, is widely recognized as one of the best books on investing. It is available via the link on this page. He is a “Market Master” on CNBC and regularly appears on Bloomberg, NPR, CNN and other national and international networks

I spoke with Jeremy on Wednesday, November 21th.

The market is trading at 15-times next year’s estimated operating earnings on the S&P 500. That entails about a 12% increase from 2017 earnings, which I think is too high. The earnings increase next year might be much more modest, like 4% or 5%, which then gives us about 16-times earnings multiple.

“I think that 16-times earnings is, on a long-term basis, relatively cheap, as long as interest rates stay in the 3% range.” For the long run, I believe the fair market value of the S&P is closer to 17- to 18-times earnings which gives us a 5% to 6% real return. This P/E multiple is higher than the historical average, because of all the liquidity in the market, the ability to get index returns and low interest rates. The equity risk premium is still pretty hefty compared to bonds.

We may now be below fair market value based on current earnings, but, next year we will be 10 years into an economic expansion. This expansion will likely break the record now held in the 1990s.

There are people talking about a 12- or 13-year expansion. Clearly, we are nearer to peak earnings than trough earnings, which means that we cannot always consider current earnings to be in a long-run steady state.

If the expansion continues, I assume that earnings are going to be $165 next year, $175 in 2020, and go up at a steady 4% to 5% a year. Then we should be at 18-times earnings. But if there’s a possibility of recession and a 20% drop in earnings, you want to be a little bit more cautious. The current decline means the market is positioning itself for a potential recession.

Why are you forecasting a slower growth in earnings next year than there has been this year?

I admit, I underestimated earnings growth this year. I knew we were going to get a pop because of the corporate tax cut, but we went well beyond it. Last year’s operating earnings on the S&P was $124. This year, it looks like it’s going to be $155. (Final numbers obviously depend on the fourth quarter.)

Actually $158 is the current estimate from Standard & Poors. I’m shaving it down three dollars.

Even then, it is an extraordinary 20% increase, beyond my expectations. The steady-state increase in per share earnings after inflation is only 3% or 4%, and most of that is generated by buy-backs.

I’ve been saying for the last six months that estimates for 2019 earnings are too high. Indeed, they’re coming down. They were $180 three or four months ago. Now, they’re $175. I expect them to decline further.

Those who keep projecting 10% to 12% earnings don’t understand long term data. 2018 has been a good year for GDP growth, but next year looks very much like 2.5% GDP growth. I don’t see how you’ 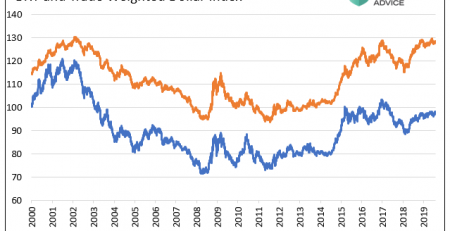 Sirius XM Radio Inc (NASDAQ:SIRI), the US satellite radio company, today announced that its board of directors has approved a program to buy back $2 billion of the company’s... Read More

I wrote the following article as part one of a two-part conclusion to my 37-page Tesla and EV industry analysis. (You can get complete analysis as an email series,... Read More

My Bet With Buffett

In his recent interview with Tobias, Ted Seides from the Capital Allocators Podcast discussed That Bet With Buffett. Here’s an excerpt from the interview: Q4 2020 hedge fund letters, conferences... Read More