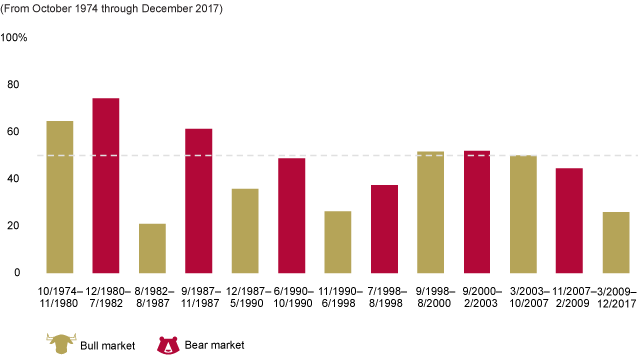 There are good reasons to invest with active management. We know, because we’ve been in the active management business since our beginning more than 40 years ago. Our first mutual fund was the actively managed Vanguard Wellington™ Fund, which was founded in 1929 and is the nation’s oldest balanced fund.

We find that all types of investors often believe in certain myths about active management. Many of those myths can be dispelled by one or more of four realities: the zero sum game, the advantage of low cost, the paradox of skill, and the cyclical nature of the market. In this article, we want to look at one of the common investor myths, which is the notion that active management will typically outperform during a market swoon.

Why wouldn’t active do better in bear markets?

To understand why this myth may not hold up under scrutiny, let’s first remember that all investing is a zero-sum game.

Across any market, there is a range of returns. Yet for every dollar of outperformance there must be a dollar of underperformance. Therefore, it stands to reason that some investors (and active managers) will do better than others, and results tend to follow a normal distribution curve with investors grouped around the market return, which is the average of all the results. For some investors to obtain a return greater than the market return, others must receive less. 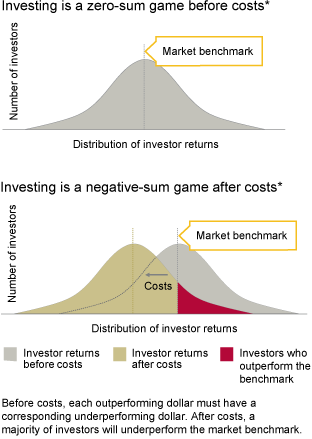 *Costs are represented by fund expenses and taxes.

But then there is a cost to investing that, as a matter of simple math, must detract from investor returns versus the return of the costless market benchmark. Hence, the distribution curve will shift to the left. All managers, active and index, face the cost hurdle in any market environment, including bear markets. The greater the cost, the greater the hurdle.

So what are the results?

The data show that, as a group, a majority of active managers do not always outperform in bear markets.

Percentage of active managers outperforming during bull and bear cycles

Persistence from one bear market to the next is difficult

Note: Top quintile performance of active U.S. equity funds in each of the nine Morningstar style categories based on their excess returns relative to their stated benchmarks during the technology bust bear market from September 2000 through February 2003 compared with their relative performance during the bear market from November 2007 through February 2009.

Mairs & Power Growth Fund commentary for the second quarter ended June 30, 2016. H/T Dataroma The market turned a page at the start of the year and we are seeing... read more

Berkshire Hathaway Inc. (NYSE:BRK.A) (NYSE:BRK.B) said today that it has reached a definitive agreement with The Procter & Gamble Company (NYSE:PG) to acquire its Duracell battery business. The transaction is... read more 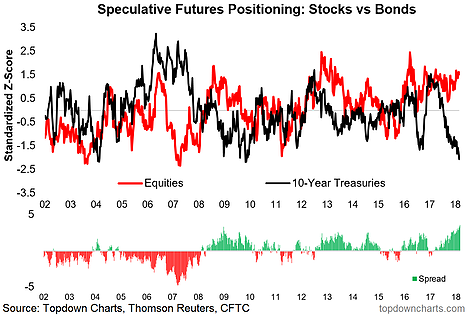 Jeremy Siegel, Wharton School at the University of Pennsylvania professor of finance, speaks with CNBC's Mike Santoli about his outlook for the markets this year. H/T Dataroma Get The Full Series... read more

Published on Jun 24, 2014 >US Equity Implied Volatility sits about 47% below its long-term average. What's causing this? Is the US Fed Squelching Volatility? MaryAnn discusses how volatility affects... read more