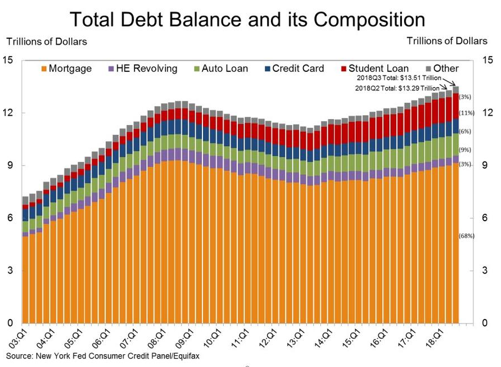 The total debt shouldered by American households hit another record high, rising to $13.5 trillion in the third quarter. It was the largest quarterly jump since 2016. Meanwhile, the percentage of student loans in delinquency unexpectedly jumped to 9.1% in the third quarter, the highest level since the end of the Great Recession.

Following those discussions, we’ll look at the likelihood of a government shutdown on December 8. Government funding is set to expire on December 7, and President Trump is adamant that if he doesn’t get federal funding for at least part of his border wall, he would be fine if the government shuts down. Democrats, of course, and even some Republicans, refuse to fund the wall.

This fight will be different from past shutdown showdowns since much of the government is already funded through next fall via deals made last summer. The main difference this time is we have a president who says that a government shutdown just might be a good thing. That’s troublesome.

Household Debt Hit a New Record High in the 3Q

Outstanding household debt owed by American families jumped to a new record high of $13.5 trillion in the 3Q, the Federal Reserve reported last week. At that level, household debt is now $837 billion higher than its previous peak reached in 2008 before the Great Recession fully unfolded.

In the June through September quarter, US household debt soared by a more than expected $219 billion. It was the 17th consecutive quarterly increase in household debt. It surpassed the previous record of $12.7 trillion set in 2008.

Mortgage balances –the largest component of household debt — grew by $141 billion during the 3Q, to $9.14 trillion. Credit card debt rose by $15 billion to $844 billion; auto loan debt increased by $27 billion in the quarter to $1.27 trillion; and student loan debt hit a record high of $1.44 trillion, an increase of $37 billion in the 3Q.

Some 4.7% percent of outstanding household debt was in some stage of delinquency in the 3Q, up from 4.5% previously. This was primarily due to a large increase in rising delinquencies on student loan payments (more on that below), according to the Fed.

Separate data from the New York Fed showed that borrowers aged 30 to 39 years and those 50 and older drove the jump in delinquencies last quarter, a measure economists use to gauge market stress and the likelihood of defaults.

All of the household debt numbers above are bad, of course. With debt at these huge levels, it won’t take much of a negative surprise to spook consumers, most of whom know they have way too much debt. Remember, consumer spending makes up almost 70% of GDP.

The NY Fed also released data last week that looks at household debt from a different perspective, which is worth noting.  In addition to reporting the total outstanding household debt, as shown in the chart above, the Fed also shows the debt as a percentage of total disposable personal income.

From that perspective, the numbers don’t look quite as grim. The ratio of total household debt to total disposable personal income was 86.5% at the end of the 3Q versus 86.0% in the 2Q. You can see what that looks like in this chart:

By this measure, household debt is not at a new record high and is still well below the peak in 2008. Yet while household debt may not be quite as high as what families may be making in terms of disposable income, it’s still $13.5 trillion of debt that must be repaid (or defaulted on) at some point. Even from this perspective, it is still very troubling.

Flows of student debt into serious delinquency — of 90 or more days – jumped to 9.1% in the 3Q from 8.6%, the NY Fed reported on Friday. That was the largest quarterly jump in the overall US student loan delinquency rate in seven years. Remember that student loan debt in most cases cannot be dismissed in bankruptcy.

It was a reversal after a period of improvement for student debt, which totaled $1.4 trillion. Serious delinquency flows have been growing on auto debt since 2012 and on credit card debt since last year, raising red flags for most economists. 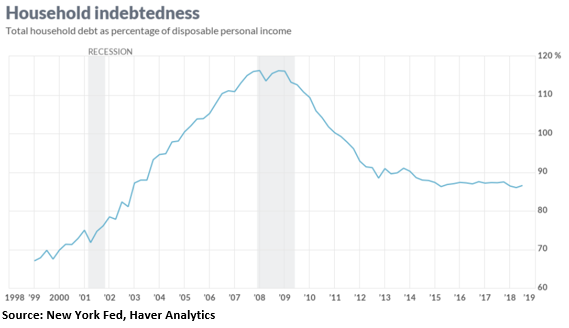 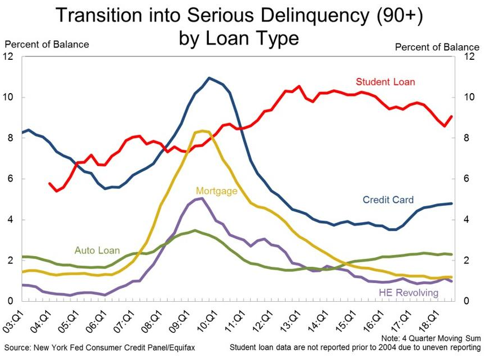 While borrowers are far more creditworthy and lenders are more stringent than in the run-up to the last downturn, the upward creep in serious delinquencies in automobile, credit card and now student debt could unsettle policymakers at the Fed and elsewhere.

If the jump in student delinquencies persists, it could raise questions about the ability of income-based repayment programs to ease debt burdens on lower-income borrowers. Unlike auto and credit card lenders, student lenders have not loosened standards in recent years.

The real question is, why have student loan delinquencies increased significantly this year with the economy growing strongly and the unemployment rate at the lowest level in almost 50 years? One reason is the fact that the improved economy has yet to deliver meaningfully higher wages for graduates who are saddled with large student debts.

Another is the fact that federal student loans are the only consumer debt segment with continuous cumulative growth since the Great Recession. Student loans have seen almost 157% in cumulative growth over the last 11 years. By comparison, auto loan debt has grown 52% while mortgage and credit card debt actually fell by about 1% over the same period, according to a Bloomberg analysis of federal loans.

As noted above, there’s a whopping $1.4 trillion in federal student loans out there (through the 2Q of 2018), marking the second largest household debt segment in the country, after mortgages. And the number keeps growing.

Finally, let’s not forget that the cost of college tuition at both private and public institutions is touching all-time highs and interest rates on student loans are rising.  Here are some stats from the College Board which tracks tuition rates:

Keep in mind that these figures don’t include books, rent, food, transportation and other expenses required to go to college. According to Student Loan Hero which tracks these costs, the average student loan debt of graduates of the Class of 2017 was $39,400, up 6% from the previous year.

This is a huge problem we really need to solve!

Another Government Shutdown Looms in December

With government funding due to run out on December 7, Congress needs to act fast to avoid a government shutdown on December 8, but neither side appears particularly willing to compromise.

President Trump has made it clear that a government shutdown could very well happen in early December if Congress doesn’t fund his border wall. Now that threat is creating one-upmanship between Democrats and Republicans, neither of which wants to give in, nor be the party responsible for thrusting the government into a partial shutdown.

Last week, President Trump told reporters that it would be “a very good time to do a shutdown,” highlighting border security needs and pushing for funding for the border wall. Trump wants Republicans to secure at least $5 billion to fund a start on the border wall, a figure that Democrats are refusing to accept.

Democrats, as you would expect, have a number of issues they hope to push ahead of the deadline that may not appeal to Republicans. These reportedly include passing legislation that would protect Special Counsel Robert Mueller, as well as removing the citizenship question from the next census survey.

And those are just the combatting priorities of Senate members. In the House, Democrats are preparing to take the majority come January, but have yet to come to a consensus surrounding Representative Nancy Pelosi’s leadership bid. Meanwhile, this could be the last chance for House Republicans to make a substantive play for getting border wall funding before they’re relegated to the minority in the next Congress.

The risk of conceding to the other party is almost as bad as the promise of a shutdown, meaning Congress could be heading toward a stalemate. And even if concessions are made — such as an agreement to fund the border wall at lower levels than the requested $5 billion — Trump himself could trigger a partial shutdown if he refuses to sign such a bill.

But all is not lost. Reportedly, around 75% of the government is already funded through next fall following deals made this summer, meaning that a shutdown wouldn’t look as bad as the one that nearly happened at the start of this year.

Despite that, I expect the stock markets will remain very volatile as we go through the shutdown showdown. I’ll keep you posted.

It’s no secret that over the last several weeks the markets have plummeted from their record highs. The question that many investors think about now is this: How can I position my portfolio if the market goes UP? What about DOWN?

This Thursday at 3:00 PM EST, Jay Pestrichelli, the Co-Founder and Managing Director of ZEGA Financial Services will be with us in a live webinar to discuss the ZEGA Buffered Index Growth (ZBIG) Strategy. It is designed to provide upside exposure to the stock markets when they are going up, but in times like these it uses a “buffered zone” to help protect you if the markets drop further.

This unique strategy, which we have been recommending for over a year, uses options to participate in market gains, plus hold-to-maturity corporate high yield fixed income ETFs as a buffer to help protect against downside risk. Both the option expiration and the fixed income maturity dates are aligned with expirations of 18 to 36 months.

The goal of the ZBIG Strategy is to help reduce or eliminate some market losses should the markets drop. The strategy is available in three different versions, depending on the risk level that is appropriate for your needs.

In encourage you to sign up for this webinar with Jay to learn more about ZBIG. You will be able to ask questions at the end. You can see their latest performance results on our website. Or you can give us a call at 800-348-3601 for more information.

Household Debt Nearly a Trillion Higher Than in 2008

Gary’s Between the Lines Blog: Debt-to-GDP Ratio Projected To Double in 20 Years

I think it highly likely our government will do some crazy things in the next few months in response to the coronavirus. However, there are some fiscal policies that... read more

David Winters, Wintergreen Advisors CEO, discusses hidden fees in ETFs and index funds. Get The Timeless Reading eBook in PDF Get the entire 10-part series on Timeless Reading in PDF. Save... read more

Magellan Asset Management semi annual report for the year ended December 31, 2015. This is the letter everyone is talking about - not sure why and we are not... read more

A very strong month For David Einhorn's investments ... Besides gold and Resona Holdings, GLRE's top holdings (see below) were all up over 10% in the month. More details below. See Greenlight Q3... read more

Plugging the flow of asset withdrawals from Pimco proved difficult in October, as investors took back $27.5 billion from the flagship Total Return Fund during the month. Pimco's AUM dissapearing The... read more