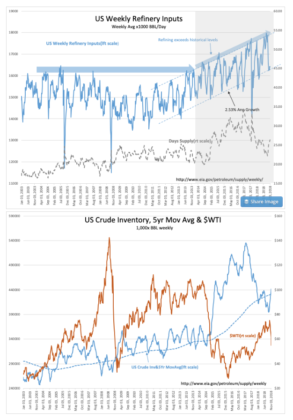 A lot of forecasts for recession are coupled to the fall in ‘oil prices’ which some investors tie to a slowing economy with the same simple interpretation of “Dr. Copper”. The US refinery industry has had an unusually long fall maintenance period which makes Refinery Inputs low for a longer period and results a period of higher US Crude Inv build. It is this build which now sits above the 5yr mov avg which has caused a fair amount of negative forecasting. The short and simple is that the perceived excess supply/weakening economy and economic/market peak based on this short-term spike in US inventories is very likely to disappear in short order. I would be very careful of trying to bet on further oil price weakness or a falling stock market.

Economic data up-trending currently is going to shock any investor who has taken a pessimistic view of markets in my opinion.

Third Point, now likely the largest single shareholder of Sony Corporation (TYO:6758) (NYSE:SNE), has recommended through a letter to management to changing the ownership structure of Sony Entertainment by IPOing a... Read More

Vanguard's presentation on quantifying the impact of chasing fund performance. H/T Barry Ritholtz The lure of performance-chasing The refrain “Don’t just sit there, do something!” has become part of daily life. The... Read More

William Ackman’s Pershing Square recently filed a Securities and Exchange Commission 14A form regarding statements he made about Allergan, Inc. (NYSE:AGN) in his recent investor letter. Ackman praises his buddy... Read More