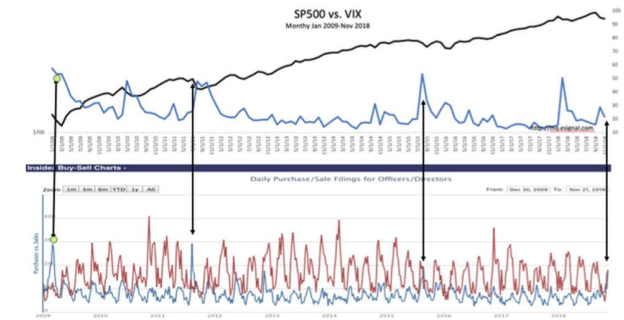 One must take into account that indices change membership over time gaining a greater share of Momentum issues such as  Tesla, Netflix, Facebook, Amazon and etc. Momentum issues which enter the indices as the cycle progresses become responsible for much of periodical price corrections during a cycle tend but rarely have Insider Buying at excessive valuations even after a correction.

Portfolios which carry these names, however, sell portions of every position to reduce market exposure when market sentiment turns negative. Sometimes this lowers valuations enough to stimulate Insider Buying in non-Momentum issues. Investors tend to view markets as cohesive, but just as investors span a Value-to-Momentum spectrum, the range of valuations spans a similar spectrum.

Having a Top-Down perspective is always problematic as most investors miss the detail which provides the greatest insight to making individual portfolio decisions. Studies such as this, reveal that markets are not uniform nor are they as simple as many make them seem. The current environment is a buying opportunity, but specifically which issues or even sectors requires detailed study.

The following is an excerpt from Principles: Life & Work. I also recently discussed some of these same issues regarding the opportunities and risks of AI at Web Summit with Garry Kasparov,... Read More

Below is a new interview with Kenneth Rogoff on the issue of abolishing cash, published in today’s issue of the Swiss Business newspaper Finanz und Wirtschaft by editor Christoph... Read More

Here's a couple of interesting charts which are behaving in a boring fashion.  The first is the 3 month LIBOR-OIS spread, and the second is the TED spread.  Both are... Read More