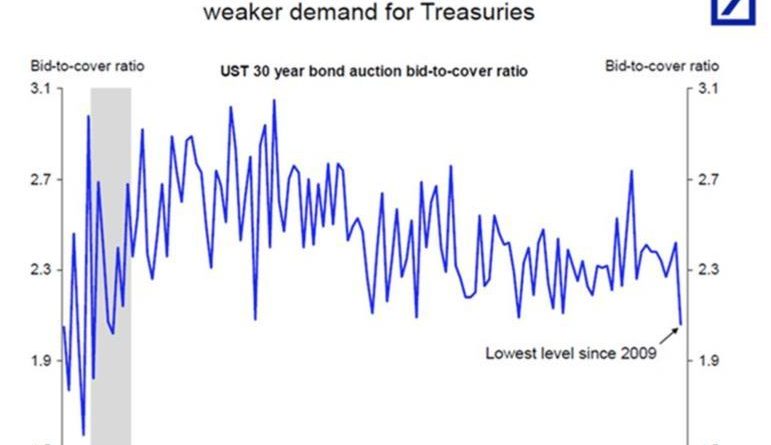 I hope everybody here in the US had a happy Thanksgiving and that you were able to spend some quality time with your family and loved ones. And for those of you in other parts of the world, I hope you enjoyed a day off from the volatile US markets!

As always, if you come across something cool during the week, shoot Alex an email at alex@macro-ops.com and I’ll share it with the group.

This week I came across a great speech given by Charlie Munger titled the Art of Stock Picking. Charlie covers the various mental models he regularly uses in markets and life that make up his ‘latticework of theory’. Here’s a section from the speech and the link to the transcript.

How do you get to be one of those who is a winner ‑ in a relative sense ‑ instead of a loser?

Here again, look at the pari-mutuel system. I had dinner last night by absolute accident with the president of Santa Anita. He says that there are two or three betters who have a credit arrangement with them, now that they have off-track betting, who are actually beating the house. They’re sending money out net after the full handle a lot of it to Las Vegas, by the way to people who are actually winning slightly, net, after paying the full handle. They’re that shrewd about something with as much unpredictability as horse racing.

And the one thing that all those winning betters in the whole history of people who’ve beaten the pari-mutuel system have is quite simple. They bet very seldom.

And the wise ones bet heavily when the world offers them that opportunity. They bet big when they have the odds. And the rest of the time, they don’t. It’s just that simple.

That is a very simple concept. And to me it’s obviously right based on experience not only from the pari-mutuel system, but everywhere else.

And yet, in investment management, practically nobody operates that way. We operate that way ‑ I’m talking about Buffett and Munger. And we’re not alone in the world. But a huge majority of people have some other crazy construct in their heads And instead of waiting for a near cinch and loading up, they apparently ascribe to the theory that if they work a little harder or hire more business school students, they’ll come to know everything about everything all the time.

On the topic of models, here’s another great (and short) article titled Why “Many-Model Thinkers” Make Better Decisions, by Scott Page, that was recently published in HBR (link here).

Scott writes that there are three rules you need to follow when constructingt your own “powerful ensemble of models: spread attention broadly, boost predictions, and seek conflict.”

I came across two great videos this week, both just over 20 minutes long. The first is from Benedict Evans over at a16z. Evans talks about how far technology adoption has come over the last 20-years and even more importantly, how massive the total addressable market opportunity remains in this space. The talk is aptly titled the End of the Beginning and it’s well worth your time. Here’s the link.

And the second video comes from Josh Wolfe who hails from the VC firm Lux Capital. It’s a presentation on the unstoppable nature of technological progress, as well as the commonalities amongst the thinkers and inventors who help drive it forward. Here’s the link.

This week I’ve been reading a book which is a compilation of essays by the late economist, Albert Hirschman, titled The Essential Hirschman.  I was only introduced to Hirschman’s work recently, but he has quickly become one of my favorite economic and political thinkers. Not only was he an impressive polymath but he also had the rare combination of also being a lucid and engaging writer.

Essays in the book range from industrialization policy in mid-century Latin America to the functioning of markets and philosophical musings on society and progress. If you’re interested in learning more about Hirschman and his work, this book is a good place to start. Here’s a line from the book.

While writing a complicated book about the World Bank in 1966, he confided to his sister Ursula that he felt at odds with those who sought big theories to explain everything. “I very much like the expression that Machiavelli used in one of his letters for his own constructions,” he confessed. These were “castelluzzi [little castles, as easy for reality to destroy as for a fecund imagination to construct]—that is probably what Eugenio called a piccole idee and the only thing I can really do.” Piccole idees, small ideas … lesser thoughts that yield great insights, close-up shots that give way to a new panorama, these were touchstones of Hirschman’s intellectual style.

I’m currently long bonds because I believe we’re about to enter a period of lower growth and slowing inflation in the quarters ahead; an environment typically bullish for bonds. Our position is in the green but not as much as I’d like, considering the recent market volatility. The recent failure by bonds to rally hard in the face of increasing market volatility is a signal. And likely a very important one.

Here’s a chart from Deutsche Bank showing the collapsing bid-to-cover ratio for 30yr Treasuries over the last few months. 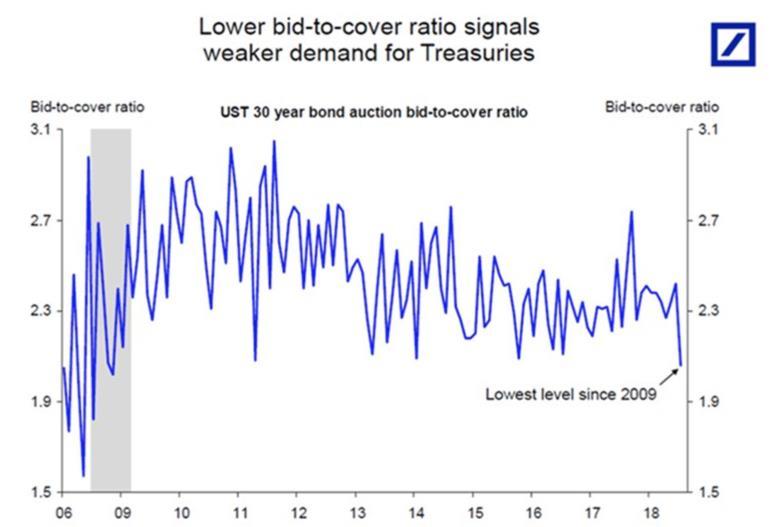 It looks like the growing supply of Treasuries (due to the widening budget deficit) is overwhelming demand for them. Since the Treasury supply is set to grow in the coming year, this could spell big trouble. Not just for bonds but equities, as well.

I’m thinking about diving into this in our upcoming MIR and breaking down demand profiles for the global marginal buyer of Treasuries in order to figure out what price (inversely, yield) bonds will have to hit for the market to clear this growing supply. This could end up spelling big trouble for markets in the quarters ahead.

Facebook (FB) is now down close to 40% from its all-time highs. And it’s battling to close above its 200-week MA (blue line) for the week. News coverage and sentiment on Facebook is awful. The stock now trades at a lower forward PE (18x) than Procter & Gamble (PG) which is trading at 19x. While there are legitimate concerns over increasing calls for regulation, it seems much of this and some is already baked into the price. 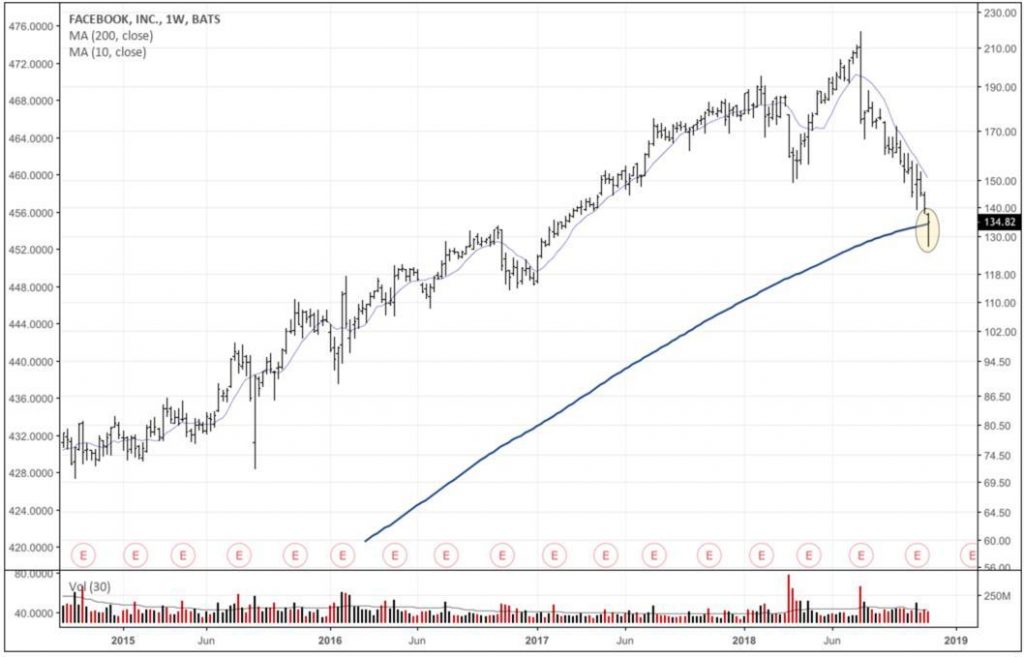 FB is on my shopping list for when I think this market rout has run its course.

You like to imagine yourself in control of your fate, consciously planning the course of your life as best you can. But, you are largely unaware of how deeply your emotions dominate you. They make you veer towards ideas that soothe your ego. They make you look for evidence that confirms what you already want to believe. They make you see what you want to see, depending on your mood, and this disconnect from reality is the source of the bad decisions and negative patterns that haunt your life. Rationality is the ability to counteract these emotional effects, to think instead of react, to open your mind to what is really happening as opposed to what you are feeling. It does not come naturally; it is a power we must cultivate, but in doing so we realize our greatest potential. ~ Robert Greene, The Laws of Human Nature

At the beginning of 2017, JP Morgan published a report on the importance of diversification. The report was astonishing because it laid bare the sheer difficulty investors face picking... read more

A classic! Howard Marks South Sea Bubble Memo From 2000 by Oaktree Capital Memo to: Oaktree Clients From: Howard Marks Re: bubble.com The book "Devil Take the Hindmost" by Edward Chancellor does an excellent... read more

As the world’s attention is fixed on the oil market, there is something weird happening in the market for natural gas. According to storage figures, the current low level... read more

Amidst a low-rates environment and being a more stable part of global EM, one can expect Asian dollar bonds to still offer a decent return during the current year, according... read more

Shareholder Proposal Developments During The 2016 Proxy Season by Gibson Dunn Thanks to Julia Lapitskaya, Sarah Fortt, Kasey Robinson, Jacob Steele and Dustin McKenzie for their contributions to this alert. Shareholder... read more