There’s a lot that goes into determining how much you pay for car insurance. Your age, gender, marital status, driving record and perhaps most importantly your home address are all major factors. This makes it difficult to compare prices between car insurance companies without going through the hassle of obtaining very specific quotes. That’s why we crunched the numbers for you and created our newest map. 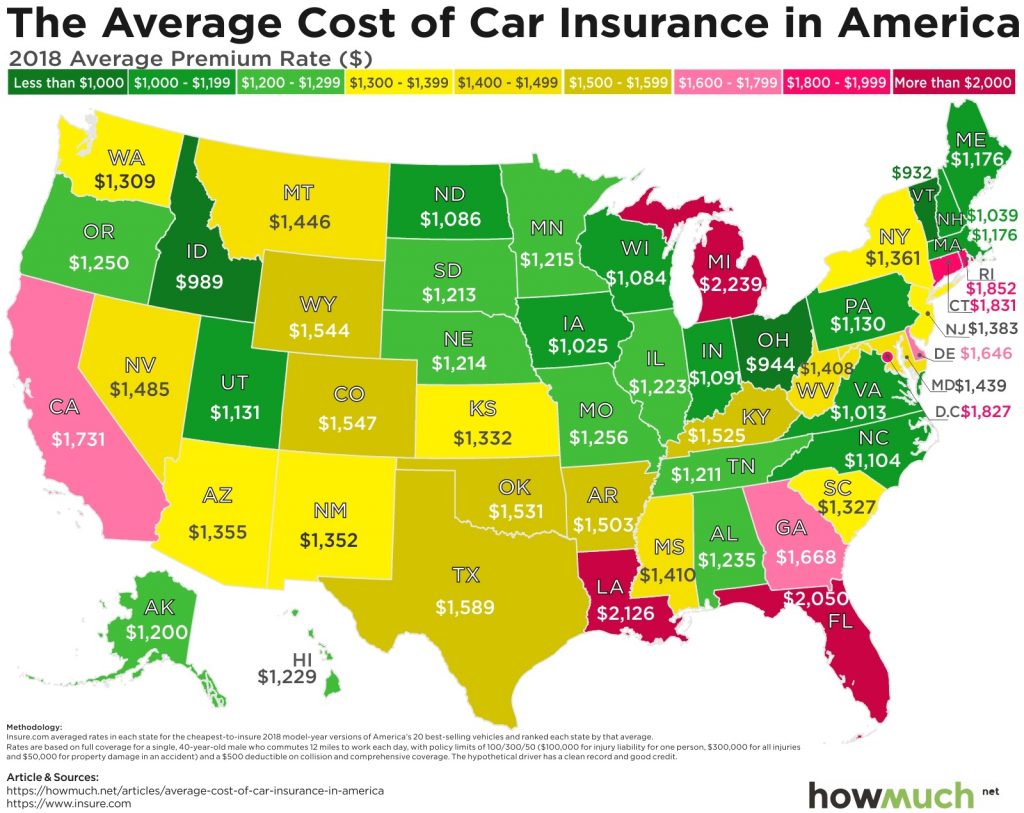 The data behind our map come from Insure.com, which provides lots of information on different insurance products, including health, life and auto insurance. They worked with Quadrant Information Services to calculate car insurance rates for a 40-year old man seeking full coverage from 6 different major carriers. They tabulated the price quoted in 10 zip codes for every state, looking for the average of a 2018 model-year version of America’s 20 best-selling vehicles. We mapped the average annual premium as a heat map, letting you easily and quickly see at a glance the states and regions with the best (and worst) rates.

The good news? There are a few clusters of states with relatively cheap rates for insurance. Across the Northeast, Vermont ranks among the cheapest in the entire country at just $932. There’s also a smattering of states across the Midwest with affordable numbers, stretching from Pennsylvania ($1,130) all the way to Nebraska ($1,214). Oregon ($1,250), Idaho ($989) and Utah ($1,131) also appear to be favorable markets for motorists.

Moving up the pricing scale, there are 19 states shaded yellow, indicating a medium-to-high price range for car insurance. One of the most interesting states in this group is New York, where average rates include prices for New York City as well as rural upstate areas. Presumably insurance rates within the metro area are significantly higher than $1,361.

There are also 9 states at the high end of the spectrum, which we define as $1,600 or more, or about $133 a month. A number of explanations readily come to mind for why insurance is so expensive in these states. Insurance is regulated at the state level. For example, Michigan is the most expensive in the country at $2,239, well over $1,000 more than neighboring Ohio. Part of the explanation for why has to do with state-mandated no-fault insurance policies. This lets people claim insurance proceeds from a company regardless of who is at fault for the accident, and according to the Insurance Information Institute, Florida and Michigan are two states with no-fault conditions that make it easier to get money from car insurance companies.

It’s no surprise to see California topping the charts as one of the most heavily populated and well-trafficked states in the country. Los Angeles is literally the worst city in America in terms of congestion. The group of pink and red states from Louisiana ($2,126) to Georgia ($1,668) and Florida ($2,050) also makes a lot of sense. They each have large metro areas that suffer damage from hurricanes. Mississippi ($1,410) and Alabama ($1,235) simply don’t have any huge cities. Connecticut ($1,831) and Rhode Island ($1,852) are similarly near the top of the chart as wealthy exurbs of New York City, not to mention the fact that winters in the Northeast can be particularly harsh for drivers.

Insurance companies pay very close attention to location when setting their rates. Moving to a new neighborhood even within the same zip code can justify a rate increase. Check out our cost of living tool to learn more.

Swedish consumers are spending at their fastest rate since 2010 according to Nordea Bank which raised its estimate for GDP growth in Sweden to 1.5 percent in 2013 from... Read More

Pat Dorsey on why not all network effects are created equal. Pat is the author of The Five Rules for Successful Stock Investing and  The Little Book That Builds Wealth. Also... Read More

Why is European Debt so cheap? what caused the yields to plunge to such low levels? Considering the fact that some still see many problems in Europe with Slovenia... Read More