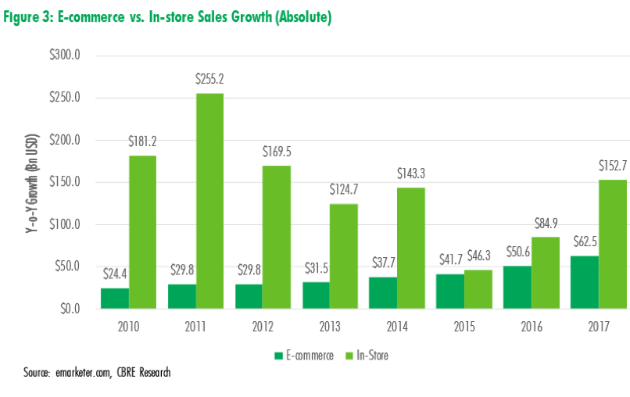 Fund labels and descriptions should not be trusted. Too often, investors make the decision to buy a fund based on its name or stated methodology, rather than on holdings-based research. Only by analyzing a fund’s holdings can one determine whether its methodology is fundamentally sound or just marketing hype. When investors neglect basic due diligence, they take more risk and miss significant red flags that cause funds to underperform.

Narratives Are Not Investment Strategies

This ETF’s label plays on the false “Retail Apocalypse” narrative that e-commerce is destroying traditional brick-and-mortar retailers by taking long positions in online focused firms and shorting brick-and-mortar firms. Our analysis shows that the narrative of brick-and-mortar decline is overhyped. Making matters worse, when we analyze its holdings, we find that this ETF actually buys low-quality, overvalued stocks and shorts high-quality, undervalued stocks. ProShares Long Online/Short Stores ETF (CLIX: $41/share) is in the Danger Zone.

The disconnect in holdings quality and ETF label is a byproduct of the fund’s methodology, which isn’t as sound as the e-commerce narrative would have investors believe. In CLIX’s profile, it states:

“Physical retailers are under immense pressure. Sales have been declining and profit margins are approaching lows not seen since the recession.”

This sales decline – the reason CLIX gives for shorting brick-and-mortar retailers – is not backed up by the data. According to U.S. Census Bureau data, CBRE Research, and emarketer.com, in-store sales have grown (and not declined) in each of the past eight years. Per Figure 1, in-store sales actually contribute more to overall retail growth than online sales on an absolute basis. Over the past three years, in-store sales have increased by $284 billion, compared to a $155 billion increase in e-commerce sales.

CLIX’s Short Strategy Is Based on False Narrative

We have featured many of the stocks CLIX takes short positions in as Long Ideas in the recent past. Companies such as Best Buy (BBY), Children’s Place (PLCE), Michael’s (MIK), Ross Stores (ROST), Target (TGT), and Walmart (WMT) have long histories of profit growth, high ROICs, undervalued stock prices, and have proven resilient in the face of struggling big-box retailers such as Sears Holdings (SHLD).

Furthermore, each of the above companies bucks the false narrative of dying brick-and-mortar retail, and in some cases, is seeing significant growth in e-commerce sales. For instance:

Holdings-based research on CLIX reveals two additional issues: severe lack of diversification and a holding that is not aligned with the stated strategy.

First, Amazon (AMZN) and Alibaba (BABA) make up 40% of CLIX’s long portfolio, and, therefore, exert outsized influence on the performance of the ETF.

Further, Amazon has  become more of a brick-and-mortar firm, with its acquisition of Whole Foods and opening of physical locations. This shift, from online to bricks-and-mortar, begs the question, why is an e-commerce giant opening locations if brick-and-mortar stores are a dying industry? The answer, as noted above, lies in the fact that brick-and-mortar is not actually declining, but instead growing, and still makes up the large majority of retail sales.

Second, one holding in particular stands out as not like the others, Netflix (NFLX). We find it hard pressed to categorize Netflix as an online retailer along the likes of Etsy (ESTY), eBay (EBAY), Wayfair (W), and even Amazon. Sure, it sells its product online, but Netflix is more commonly compared to tech firms and/or media conglomerates than it is to retailers.

Holding Netflix, given that it is not a retail business, suggests that CLIX’s real strategy is to chase performance or momentum. Unfortunately for CLIX investors, Netflix may be running out of momentum, as we highlighted in our recent article “Netflix’s Momentum Has Run Out”.

CLIX’s asset allocation strategy results in picking worse stocks than its benchmark. You’d hope a fund that was focused on a specific subset of the retail market to be able to pick better stocks than a fund allocating passively across the entire market. Instead, as Figure 2 shows, our holdings-based research reveals that CLIX has worse asset allocation than its benchmark, the iShares Trust Russell 3000 ETF (IWV).

Figure 2: CLIX’s Asset Allocation is Worse Than its Benchmark

To make our determination of holdings quality, we leverage our Robo-Analyst technology[1] to drill down and analyze the individual stocks in every fund we cover.

Of CLIX’s long positions, only 11% earn an Attractive-or-better rating, while 56% of its long positions earn an Unattractive-or-worse rating. Long positions include companies such as Blue Apron Holdings (APRN), Overstock.com (OSTK), Wayfair (W), and JD.com (JD), each of which have a negative return on invested capital (ROIC) over the last twelve months. These are exactly the types of firms where cash flows cannot justify their valuations, which we call micro-bubble stocks.

Look Past the Narrative and Demand Diligence

Because of Amazon’s success, the narrative that all brick-and-mortar based businesses are in decline has taken ahold of the market. As shown above though, this narrative is simply incorrect. While there are certainly traditional retailers that are struggling (such as Sears) there are also numerous retailers thriving in the industry. We’ve highlighted a few above, but the list doesn’t stop there.

Investors need to check their enthusiasm about all things e-commerce before jumping into this ETF. Without holdings-based research, investors would fall prey to marketing that touts the end of brick-and-mortar while in reality, the ETF allocates heavily to low-quality, unprofitable stocks.

This article originally published on November 5, 2018.

Investing By Design: Parallels Between Architecture And Investing by Broyhill Asset Management “Think simple . . . reduce the whole of its parts into the simplest terms, getting back to... read more

Japanese stocks have shot up 75% and then tanked 20%. So are they cheap? Ignoring PE TTM the answer appears to be yes. First, look at Market Cap to... read more

Recent economic data has been supportive of the advance in equities since the beginning of July, however, many of the important fundamental trends that are usually supportive of a... read more

Pete Mladina, "What You Thought Was Skill Was Just Risk Premia" by Meb Faber Guest: Pete Mladina. Pete is the Director of Portfolio Research for Wealth Management at Northern Trust.... read more