Beyond the headlines and raw census numbers, it can be difficult to take population patterns into perspective. The talented team over at The Pudding has created an amazing, granular map that shows these patterns as 3D stacks.

Our focus today will be on growth between 1990 and 2015, as urban settlement patterns across Canada and the U.S. shifted dramatically over this relatively short timeframe. Let’s take a look.

One of the most dramatic examples of robust growth is Toronto.

Canada’s largest city nearly doubled its population since 1990, and growth was distributed throughout the region. This city is a rare example of both extra-urban and downtown residential growth.

Vancouver is another Canadian city with a swelling urban population base. The city’s recent population growth has been heavily concentrated along transit lines and the downtown core, resulting in a “spiky” visualization which resembles the condo towers now dotting the city’s skyline.

Nearby, Seattle has added over a million people to its population since 1990. With one of the strongest economies in the country, it’s unlikely that momentum will slow any time soon.

Only recently have some cities begun to see urban residential construction. For much of the ’90s and ’00s, America’s growth was in peripheral suburbs, where land was plentiful and cheap. 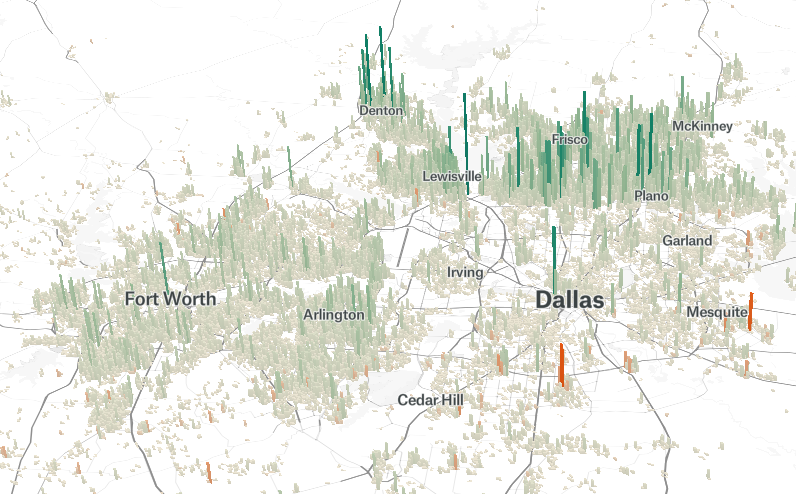 This sprawl effect is particularly easy to spot in the Texas Triangle – which encompasses the cities of San Antonio, Austin, Dallas–Fort Worth, and Houston – and Atlanta.

While Los Angeles did see a modest amount of growth over the past 25 years, it was the Inland Empire – anchored by San Bernardino and Riverside – that saw the most dramatic population growth in the region. The construction boom is only intensifying. The region added 50,000 new residents between 2016 and 2017.

In general, smaller towns either lost population or remained relatively static. The exception is in places where resource extraction caused a growth spurt. Two prime examples are in Gillette, Wyoming, and Fort McMurray, Alberta. In the latter town, oil sands extraction added tens of thousands of new residents in a short amount of time.

Chicago experienced one of the most striking growth patterns over the past 25 years. The contrast between urban decline and growth in the exurbs is clearly revealed in this visualization. 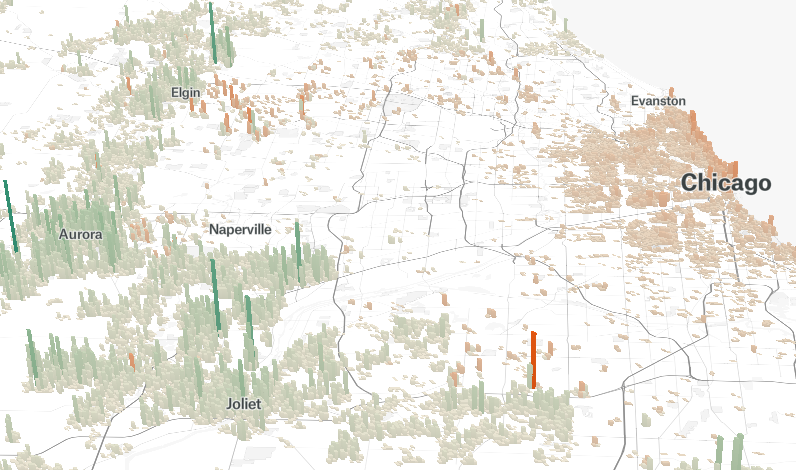 Contrast is also clear when looking at divergent patterns of Washington D.C. and Baltimore. The nation’s capital and surrounding areas have been growing steadily in recent years, whereas the neighboring city’s population is declining towards a 100-year low. 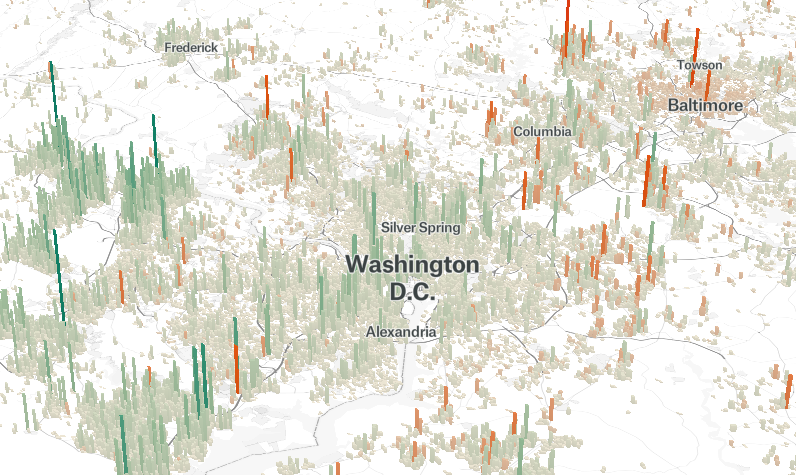 While a number of urban areas experienced dramatic shifts in the last couple of decades, some cities sidestepped wild population swings. For example, much of Philadelphia’s population pattern remains similar to what it was in 1990.

Scranton, Pennsylvania, and Springfield, Massachusetts, are examples of smaller cities that remained in stasis.

A number of cities in America’s “Rust Belt” experienced declining populations. The visualizations of cities like Cleveland and Detroit show just how pronounced the exodus was.

The shrinking tax base and glut of vacant homes is causing a number of problems in the two cities, and with mixed economic prospects, it’s unclear what the next 25 years will bring in terms of population changes.

Often, population declines are the result of economic reasons such as a decline in manufacturing or general stagnation. On occasion though, the raw power of nature changes the course of a city’s history. This is the case in New Orleans, were Hurricane Katrina’s legacy is clearly seen in this visualization. 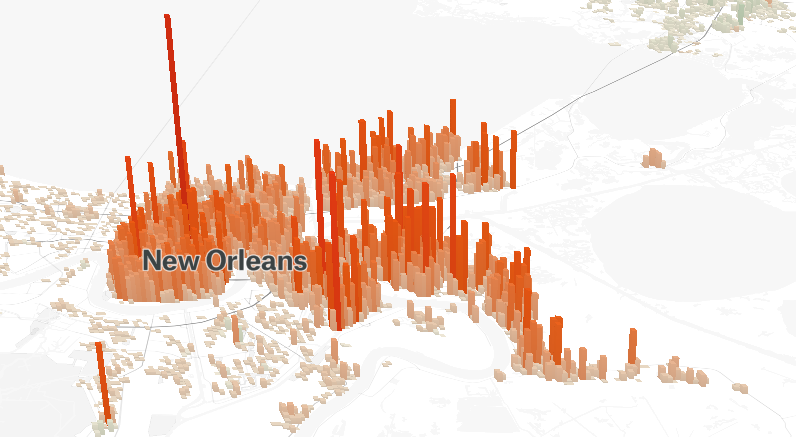 New Orleans did recover in the years after the hurricane. However, as of 2015, the city was still far below its pre-Katrina population. Resettlement has been patchy as well, which is reflected in the towering red peaks of the population map.

To explore your city or other parts of the world, visit The Pudding’s interactive map.

Meson Capital partnership letter for the second quarter ended June 30, 2016. Dear Partner, Our net performance for Q2 was (5.8)%, vs. indices (in order of relevancy for comparison) of: 1.4%... read more

Michael Mauboussin Interview: What Investors can Learn From Poker

Michael Mauboussin is n expert in the field of behavioral finance and has some famous books on the topic including, Think Twice: Harnessing the Power of Counterintuition and More More Than You... read more