Follow Up On Singtel 5.9% Yield – Are Dividends At Risk? – ValueWalk Premium

The last post on Singtel generated quite a lot of responses on Facebook which I didn’t find surprising given the widespread ownership of the stock.

One of the interesting comments which I thought I re-share here along with my thoughts for the benefit of everyone:

Impact of airtel is minimal, provided their management dont enter price war and burn cash which will lead to big losses.

If $0 profit and loss, then no impact to Singtel’s profit cos contribution is insignificant.

So just a re-cap, Singtel’s group share of associates pre-tax profits took a hit from its India operations – which in all fairness is really a small percentage of its overall profits. 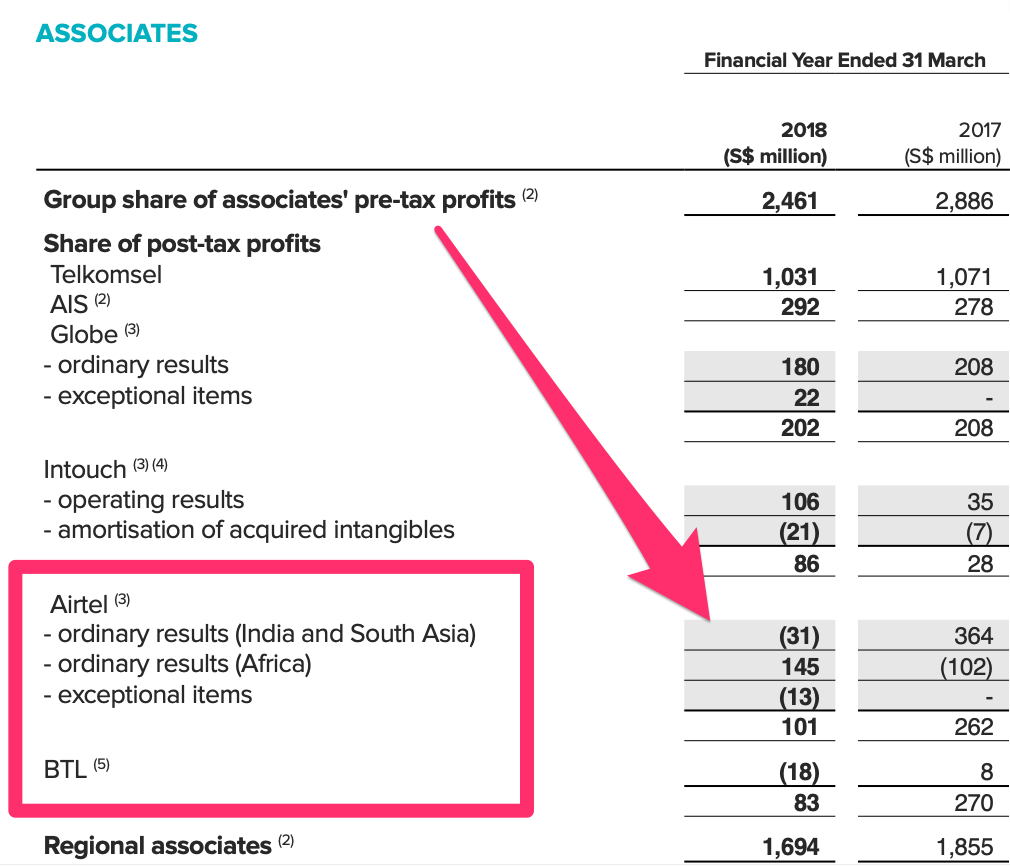 In the last post, I talked about how you have to look at free cash flow generation to understand if dividends are sustainable.

Since Bharti Airtel is contributing negligible amounts of dividends to that free cash flow, the comment is technically true.

However, let’s try looking at it even deeper.

Because of the debt it has taken on in the last few years, Bharti Airtel’s balance sheet has weakened considerably.

As highlighted in the article, “Bharti Airtel can either refinance its debt or sell stake in various investments to repay debt”.

This of course assumes that capital markets are open and conducive to them doing so and we don’t run into 2008 again.

If not, there is a chance that it may have to raise capital again from shareholders (i.e. Singtel) which may eat into their free cash flow.

There was a good article in the Business Times on the subject.

INDIAN carrier Bharti Airtel faces mounting debt, but that is not expected to sway Singapore’s Singtel Group, which has a 39.5 per cent stake in the regional telecoms player.

Bloomberg reported on Tuesday that Bharti Airtel has agreed to two- and three-year loans, to raise more than US$2 billion from banks – just weeks after credit agency Moody’s put the group’s “Baa3” ratings on review for downgrade, on expectations of weak cash flow and high leverage.

Are dividends at risk?

I just want to clarify here that I don’t think that this pretty bearish scenario is something that I expect and that Singtel is still in a relatively strong position and can probably fund any additional investment into Bharti Airtel without eating into its dividends.

I do actually think that these strategic investments will pay good dividends going forward which is very much in-line with what Singtel’s position is.

“We are a long-term strategic partner of Airtel and remain positive about the potential of the markets it operates in, given the younger population demographics and the implications this has on mobile data growth.” –  Arthur Lang, chief executive of Singtel’s International Group (from Business Times)

In fact, because it has several arms of profits, it can exploit difficulties in one market can add to its investment (isn’t that what value investing is?)

Thinking about it one level deeper

But let’s take it another step further using a simple analogy of someone owning a house thats 50% paid up.

The rent is the free cash flow coming in that he pays to himself as dividends. If he doesn’t pay out all the money as dividends, he can retain some of the cash to make other investments or to further pay down the debt.

Alternatively, because the property is already 50% paid up, he might be able to draw out some of the equity paid to make other investments too.

The case with Singtel is exactly the same.

Singtel doesn’t necessarily have to fund any future investment in Airtel (or any other investment for that matter) from its free cash flow.

It can also raise debt or issue shares, sell off its stakes in existing investments (especially if it thinks the prospect of its new investment outweighs its current holdings) etc to do so.

Only the paranoid survive

Still I think it is always good to think of such things by default.

Most companies are really not like Singtel (its pedigree, shareholder, free cash flow generation ability etc).

In business, only the paranoid survive so I bring the default worst case scenario to every investment idea just in case.

In my case, I just want to know the range of key worst case scenarios and weigh the probability of it happening.

There is a big difference between a temporary price decline, and a permanent decline in value (because a company has to raise capital at the worst possible time).

Think about the difference between a temporary price decline and REITs being forced to raise capital at the worst possible time i.e. Great Financial Crisis 2008.

The second one is something that I keep at the back of my mind constantly as you never know when capital markets slam shut.

Disclosure: The author does not own Singtel stock at the time of publication. This is not a buy or sell recommendation but merely the written opinion of the author meant for educational purposes.

Niederhoffer Capital was down 1.6 percent in August in the flagship strategy according to a shareholder letter obtained by ValueWalk. The Diversified Alpha Program manages $492 million and is... Read More

Updater: The Next Uber Or Airbnb?

You have heard of Uber, Lyft and Airbnb but what about Updater? Probably not, but one Australian hedge fund thinks that will change very soon. The Australia-based Newgate Real Estate... Read More