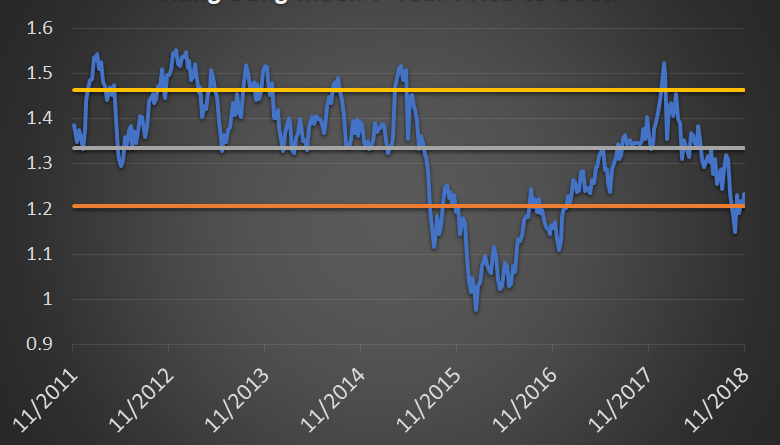 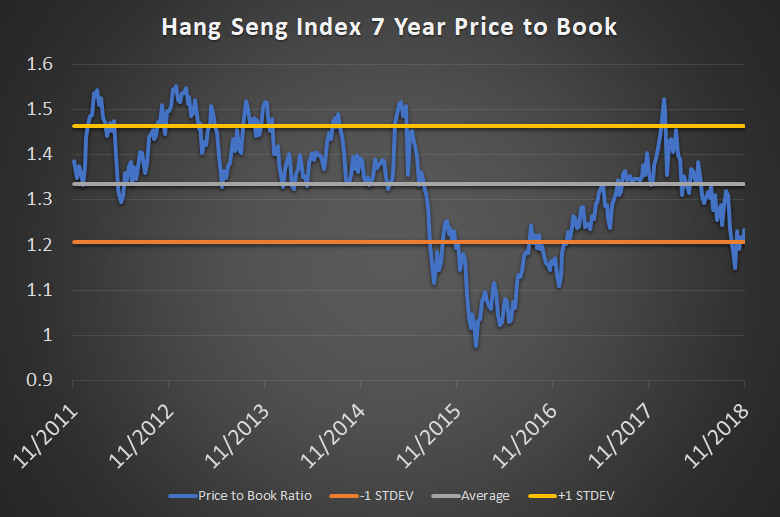 Based on the P/B chart, the Hang Seng Index is trading at the cheaper end of its range but not yet at levels seen in 2016.

Top 10 components of the Index

People are far more bearish than just 6 months ago – with highflying companies like Tencent bearing the brunt of the sell-off. Expectations earlier in the year that the trade war would be resolved in earlier discussions proved wishful thinking as Trump ripped apart earlier agreements negotiated by his staff.

A subject which I will touch upon more in a subsequent post is that there’s a lot happening behind the scenes too than just the trade war which has become a boogyman of sorts.

China had been embarking on a dramatic deleveraging campaign. Casualties included firms like Anbang which went on a overseas spending binge (former head of Anbang has been jailed), Huarong Asset Management (Former Chair of Bad-Debt Manager China Huarong arrested) and so on.

My own gut feel is that the impact of the trade war on sentiment was much more dramatic then anticipated which led to a flurry of action by the government in October to try to boost sentiment.

You can’t conduct a deleveraging campaign in the middle of a dramatic slowdown and recent policy changes have reflected that new reality.

About the Hang Seng Index:

The Hang Seng Index (“HSI”) is one of the earliest stock market indexes in Hong Kong. Publicly launched on 24 November 1969, the HSI has become the most widely quoted indicator of the performance of the Hong Kong stock market.

To better reflect the price movements of major industry sectors of the market, HSI constituent securities are grouped into 4 sectors including Finance, Utilities, Properties, and Commerce and Industry Sub-indexes.

The price-to-book chart (P/B chart) is a useful complement for investors trying to understand how cheap or expensive a certain sector or country is.

In the case of Hong Kong, the P/B chart is still a useful proxy although arguably less useful than Singapore given the presence of heavyweights like Tencent which should not be valued on a P/B basis (the value of Tencent is derived from its intangibles not its tangibles).

In an earlier post on the STI valuations, we talked about what price / book value was can you find it here:

How cheap is the Singapore market? [STI 7 Year Valuations]

Liquidity remains a concern across all markets, according to Goldman Sachs' special, end of the year, "Top of Mind" Global Macro Research report. The bank's research shows that evidence of... Read More

It is beneficial for US investors to read Chinese media coverage of our NQ Mobile Inc (ADR) (NYSE:NQ) reports. This update consists of English translations of four articles that... Read More