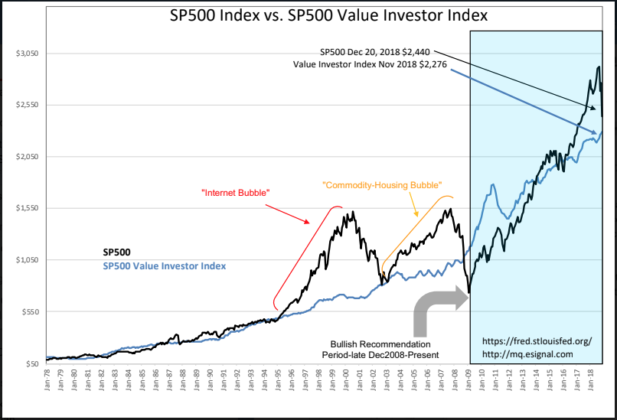 There really isn’t any fundamental reason for this sell off. Based on economic data the economy is strong and continuing to grow. The market was high, but nowhere near as high as the last two “bubbles” when stocks were over >100% higher than the S&P Intrinsic Value Index. Recently at their peak they were ~25% over the index’s value.

As an indicator, the Value Investor Index does not act as an on/off switch for investors but is exceptional at identifying levels when investors have high pessimism that is not justified by economic conditions.

The Insider Buying is strongest in 3yrs-stronger than 2016 SP500 lows-Good Value Investor signal-see the BLUE vsRED levels. This has always been a good economic signal as well as the basis of insider activity is a multi-year perspective of future business commitments. One should always seek a blend of internally consistent economic data when using any indicators. We have such today. Note the CAB vs Job Openings and 2016 area highlighted as ‘Industrial Recession’ for comparison

Market liquidity is at times one of those little-discussed footnotes in an investment thesis that is typically understood by those with deep knowledge with broad interests. It takes a... Read More

MS: Brexit Could Spark Global Recession Financial markets around the world seem to be recovering from the initial Brexit shock yet the underlying political discontent that helped vote leave... Read More

Below is the first ever letter from Troy Marchand of Foundry Capital Group.  They launched a micro-small cap special situations fund June 2, 2015.  This is their 3Q 2015... Read More

HSBC, the London-based bank that seems unable to avoid trouble in certain divisions, is now being investigated over its hiring practices in Asia. The bank confirmed Monday it is... Read More

The 3 Traits That Propel Success: Study Of Eight Cultural Groups

In Amy Chua's new book,  The Triple Package: How Three Unlikely Traits Explain the Rise and Fall of Cultural Groups in America, the bestselling author of the (in?)famous book -Battle... Read More