The Obama Economy vs. The Trump Economy – ValueWalk Premium 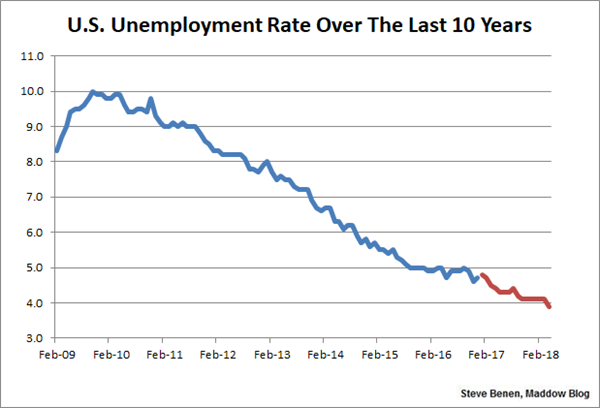 During his final days in office, I gave a thumbs-down assessment of Barack Obama’s presidency. Simply stated, he increased the burden of government during his tenure, and that led to anemic economic numbers.

Now the economy seems to be doing a bit better, which is leading my friends on the left to make two impossible-to-reconcile claims.

Writing in the Wall Street Journal, former CEO Andy Puzder claims that Trump easily wins over Obama when you look at the numbers:

For eight years under President Obama, the growing burden of government suppressed the economic recovery that should have followed the recession of 2008-09. Mr. Obama nonetheless has claimed responsibility for today’s boom, asking Americans in September to “remember when this recovery started.” Yet it wasn’t until President Trump took office that the economy surged. …The result is a rising tide that is lifting boats across every class and region of the country. …Today unemployment rests at 3.7%, near a 50-year low. Since the government began reporting the data, unemployment has never been as low as it is today for African-Americans, Latinos, Asians and people with only a high-school education.

It’s certainly good news that unemployment rates have dropped. But labor-force participation numbers still haven’t fully recovered—or even come close to fully recovering—so the data on jobs is not quite as impressive as it sounds.

That being said, Puzder has a compelling indictment of Obama’s performance:

During a typical recovery, the economy grows at a rate between 3% and 4%, and the Obama administration predicted such a surge in its 2010 midsession review. It never came. The “recovery” of those years often felt much like a recession.

Amen. This echoes my criticism of Obamanomics. He made the US a bit more like Europe, so it’s no surprise that growth was weak.

Let’s now look at Puzder’s evidence that Trump has done a better job. He compares the end of the Obama economy with the beginning of the Trump economy:

All of this data is compelling, but I caution my GOP/Trump friends about relying on short-run economic data to make their case.

For instance, what if the economy is in a false boom caused by easy money? If that leads to a recession, will they want Trump to take the blame?

Or let’s consider a more tangible example. Trump and his supporters used to make a big deal out of rising stock prices, but that argument no longer appears to be very persuasive.

Let’s close with two charts that take different sides. The first one is from MSNBC, which makes a persuasive case that reductions in unemployment under Trump are simply a continuation of the trend.

On the other hand, this second chart, which comes from the White House, shows that economic outcomes are better than what the Obama Administration predicted. 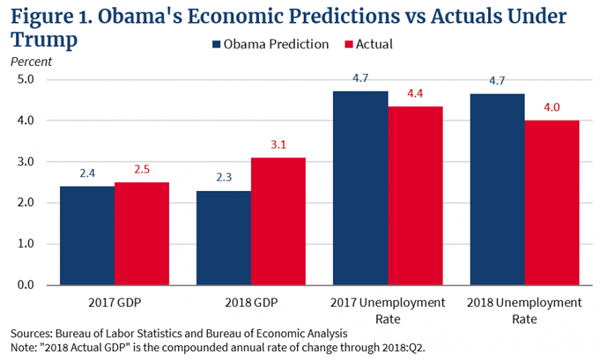 This also is compelling data, and I’ve explained that even small improvements in economic performance are very desirable.

Still, it remains to be seen whether this additional growth is either real or sustainable.

The bottom line is that there’s no reason to expect big economic improvements under Trump, at least in the long run. His good policies on taxes and regulation are offset by bad policies on spending and trade.

Real interest rates, both long and short duration, have been on a steady decline since the 1980s. Some analysts believe that thanks to the world's debt binge, and highly... read more

Today, markets are displaying remarkable complacency toward a rapidly deteriorating Italian political and economic situation. They are doing so in a manner that is painfully reminiscent of how complacent... read more

Here is an excerpt from Business Insider on the favorite books of top CEOs such as Warren Buffett, Oprah Winfrey, Mark Zuckerberg and others followed by a little something on... read more

What Being Wrong Can Teach Us About Being Right (Michael Mauboussin) Published on Jun 29, 2016 No one is right all the time, but one can learn to be wrong less... read more

Title III Of The JOBS Act Has Landed. Now What? by George Gaprindashvili, PitchBook In October, the U.S. Securities and Exchange Commission (SEC) approved Title III of the Jumpstart Our... read more

Alluvial Fund letter to partners for the third quarter ended September 30, 2017. Dear Partners, I am pleased to report another quarter of gains for Alluvial Fund, LP. For the quarter... read more