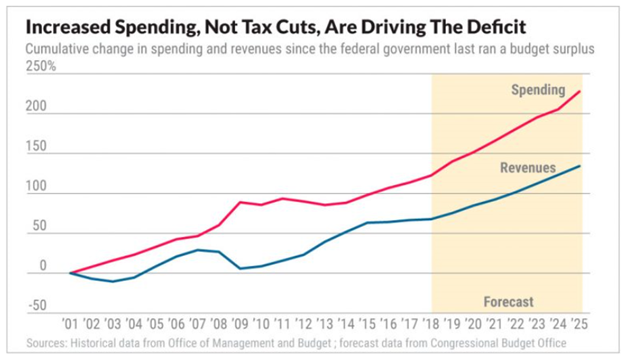 I hope this letter finds you relaxing with family and/or good friends for the holidays. I certainly am. Our two kids and their spouse/fiancé are home for Christmas, which is always a special treat for Debi and me. I’ll be cooking prime rib for our Christmas dinner.

Later today after we go to church, we’ll be hosting several families in our home this evening. Everyone’s bringing their favorite dishes. I’m doing shrimp cocktail, homemade guacamole and empanadas. All the kids will be there, so it should be fun as usual. We do this every year.

Rather than the usual Forecasts & Trends, I’ve chosen to reprint an interesting editorial from Investor’s Business Daily which summarizes the results of the Trump tax cuts. It’s a welcome departure from what we hear in the mainstream media and from Democrats.

All of us at Halbert Wealth Management wish you a very Merry Christmas and thank you for your continued confidence!

Trump’s Tax Cuts: One Year Later, There’s Much To Celebrate

Economy: President Donald Trump signed his tax cuts into law one year ago this week. That means we’re going to hear a lot about how they fueled massive deficits and failed to boost economic growth. Neither are true, but that won’t stop Democrats and the press from repeating these falsehoods ad nauseam.

To hear critics put it, the reforms to the individual income taxes — which lowered rates and expanded the standard deduction — and the much-needed cuts to the corporate income tax rate, were a bust. They didn’t help families. Didn’t boost corporate investment. They failed to turbocharge the economy. All they did was benefit the rich and explode the deficit.

You don’t have to look very hard to see that the tax cuts did, indeed, boost GDP growth and incomes.

Contrary to Democrats’ claims, workers are clearly sharing in the tax-cut windfall. Not just through tax-cut bonuses and lower withholdings, but through increased opportunities and wage growth.

As we noted in this space yesterday, blue collar workers are now in short supply, “reversing a decades-long trend in the U.S.” Average hourly wages are rising at 3.1%, the fastest rate since 1999. Unemployment rates are at lows not seen since 1969, and for minority groups, they’re lower than any time on record. Median household income is at all-time highs.

None of this is a continuation of the Obama economy, which had flatlined the year before Trump took office. Growth was so sluggish that conventional wisdom was the U.S. economy was destined for slow growth in perpetuity.

But even if Trump’s tax cuts did boost the economy, surely critics are right that they are driving the deficit into the stratosphere.

Take a look at the nearby chart. It shows the growth in spending and revenues since 2001, the last year the federal government ran a budget surplus.

What you see is that revenues are up roughly 75%. But spending has more than doubled.

The chart reveals something else. After rebounding from the recession, revenue growth flatlined starting in 2015. That was three years before the Trump tax cuts went into effect. The CBO expects revenues to resume their steady climb starting next year. So, revenues flatlined before Trump’s tax cuts went into effect, and will steadily rise after, and we’re supposed to believe that the tax cuts are the problem?

Of course, one could argue that the country should close the gap between revenues and spending by sharply raising taxes. Or, through some combination of tax hikes and spending cuts.

But the tax hikes needed to close this gap would cripple the economy, resulting in bigger deficits, not smaller ones. And budget deals that promise spending cuts in exchange for tax hikes never work as promised.

For example, in 1990, George H.W. Bush broke his pledge and raised taxes as part of a budget deal with Democrats. Bush promised this would make a huge dent in federal deficits. But as Stephen Moore points out in these pages, “the budget deal added nearly $500 billion to the national debt.”

[Gary here: Be sure to read the Stephen Moore article that IBD refers to above. He describes how the economy boomed after the Reagan tax cuts in the 1980s, and how the federal budget deficits exploded after President George H.W. Bush took the tax cuts away. Most people under the age of 40 don’t know about this. FYI, Stephen Moore has become one of my favorite writers. Now back to IBD.]

Sure, polls show the tax cuts are unpopular. But that’s because Democrats and the press have been grossly misleading about it. And because pollsters never ask about specific provisions of the tax reform, each of which the public strongly supports.

One year after Trump signed the tax cuts into law, there’s plenty to celebrate.

If you missed our webinar with Wellesley’s Chief Investment Officer, Michael Miller last week, a recorded version is now available on our website. Wellesley has been investing in convertible bonds for over 20 years in many different market environments and has been on our recommended list of programs since 2005.

The hybrid nature of convertible bonds and the ability to “put” them back to the issuer can make them a good choice in both rising and falling market environments. With interest rates on their way up, it’s good to have an investment that can roll with the punches.

If you have questions about an investment with Wellesley or would like more information on their convertible bond programs, send us an email at info@halbertwealth.com. Or you can call Phil Denney or Spencer Wright at 800-348-3601 for more information.

Have a great holiday, everyone! And don’t forget the Reason for the Season!!

We Have Your Hedge, Mr. Price"

Brandywine Asset Management commentary for the month of August 2017, titled, "We Have Your Hedge, Mr. Price." Get The Timeless Reading eBook in PDF Get the entire 10-part series on Timeless... read more

GrizzlyRock was recently invited by Institutional Investor and SumZero to present a top idea at their emerging manager event in New York. The following is an excerpt from the... read more

BOA: Investors Are Pricing In A World Almost Free Of Risk

Over the weekend Bank of America’s volatility experts, Jason Galazidis and his team put out a report highlighting that US credit isn’t the only credit market where investors are... read more