As always, if you come across something cool during the week, shoot us an email at alex@macro-ops.com and I’ll share it with the group.

The Bullish Case For US Stocks — Alex explains why sentiment indicators are signaling a potential bottom in the stocks.

Yield Curves – Not sure what an inverted yield curve means? Check out this video.

Mohnish Pabrai founder and CEO of Dhandho Funds has released the latest picks for his “Free Lunch” Portfolio. (Link here) It’s an algo that selects stocks within three categories: Uber Cannibals, Shameless Cloning, and Spinoffs. You can read about this in more detail here.

If you want a concise overview of the happenings in tech, Ben Thompson’s The 2018 Stratechery Year in Review has it all. Topics include: Aggregation Theory, Tech and Regulation, Antitrust, and a summary of what has gone down at all the big tech firms in 2018.

Operator Kean, wrote a fantastic piece on the Second Opium War, and how those events have shaped the way the Chinese think about policy to this day — nearly 158 years later. (Link here)

Here’s a summary in his words on what the Chinese learned from their defeat.

The Chinese have learnt bitterly that:

High levels of ethnocentrism would only lead to misunderstandings and clashes. In the 19th century, these clashes resulted in the technologically superior party triumphing over the other (Britain at first, and later France, Germany, Tsarist Russia, the United States (US) and Japan).

In order to catch up with their peers/rivals, they need to be open-minded and humble to learn from others. However, they look a long time to realise this as their Manchurian overlords (the Qing imperial government) were the dominant power in Asia for centuries and were slow to accept that they have become obsolete. The early Chinese reformers during the last days of the Qing Dynasty like Dr Sun Yat-sen took inspiration from both the US and Japan.

While attempting to learn from others, adaptation is required to ensure that the new concept or system is unique and appropriate for Chinese civilisation and its continuity.

Most importantly, they have to strive towards being technologically superior than others as the memories of having their arms twisted are very much alive in the Chinese psyche.

These lessons learned from the war long ago still drive their policy today. It’s useful to have this context when gaming out probable macro scenarios for the future of China’s economy.

Finally, check out this Julian Robertson article on how he navigated through the 1987 crash after experiencing a 30% drawdown on his fund within one month’s time. This post shows how a true master trader navigates out of emotionally tough times.

Last week, I listened to Adam Robinson talk about his global macro investment process. And this week I did a little digging into his methods.

Adam mentioned that he likes to look at what bond traders are doing as a leading indicator for what equity traders are going to do. Here’s an excerpt explaining it in a little more detail.

So, for example, the ETFs for that, if people follow this, the best ETFs for that are LQD and IEF. So LQD is the investment-grade corporate bond ETF, and IEF is the US Treasury 10-year ETF. So you just take a ratio of that, and follow that ratio, and that’ll tell you what bond traders think of the economy. And when they disagree seriously with equity traders, the bond traders are right and early.

I charted this LQD/IEF ratio out yesterday and saw exactly what Adam was talking about! 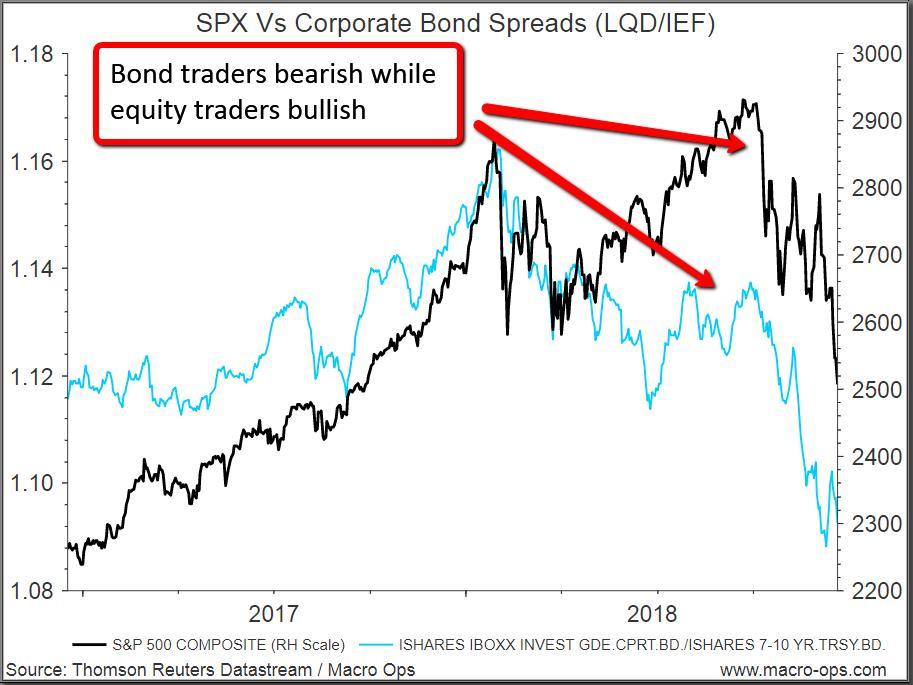 Corporate bond spreads (in blue) never recovered from the February sell off. They continued to make new lows and trudge around sideways during the summer months. This divergence eventually resolved itself in favor of the bond traders after this horrendous Q4 in stocks. Bond traders were right and early.

The Past, The Present, & Future of Quant with Cliff Asness kept me engaged because of the philosophical nature of the show. Patrick O’Shaughnessy asks Cliff the hard questions about whether or not factor investing can continue to produce alpha.

Cliff also had some really interesting commentary on the role of active traders vs passive traders and what that mix will look like going forward. Excerpt below:

One giant question is how many people, how many organizations, how much of the world’s resources have to be devoted to accurately pricing securities?

Now to someone who hates markets, their default answer is almost anyone doing this is just betting and it’s not a useful function in society and I will take the strong otherside of that. A huge advantage of a market economy versus, and I’m getting political, but versus a planned economy is that smart people in a competitive world are trying to set prices, and there is a tremendous positive externality from people doing it. It doesn’t mean everyone has to be an active manager, right? If the whole world were actively trading stocks the information is already there. And like all math problems, the last piece of information, taking it from 1 basis point mispriced to 0 basis points mispriced is worth approximately nothing.

To give you another example, Jack Bogle will tell you flat out something very obvious but still fun to hear from Jack. Not everyone can market cap index. Somebody has to think about individual stocks. Quants can help, but I actually think you still need traditional managers.

We do need active managers. We have no idea how many we need.

The Power of Now by Eckhart Tolle – I found this through a recommendation from a friend. It’s a book about mindfulness. It was written in 1999 and still makes appearances on Amazon’s “Most Read” list, an incredible testament to its quality.

The concepts inside aren’t anything new. But Eckhart Tolle has a way of talking about mindfulness that makes it easier to internalize. Here’s one of my favorite excerpts from the beginning of the book.

Then the mind is using you. You are unconsciously identified with it, so you don’t even know that you are its slave. It’s almost as if you were possessed without knowing it, and so you take the possessing entity to be yourself. The beginning of freedom is the realization that you are not the possessing entity — the thinker. Knowing this enables you to observe the entity. The moment you start watching the thinker, a higher level of consciousness becomes activated. You then begin to realize that there is a vast realm of intelligence beyond thought, that thought is only a tiny aspect of that intelligence. You also realize that all the things that truly matter — beauty, love, creativity, joy, inner peace — arise from beyond the mind. You begin to awaken.

A lot of this stuff goes hand in hand with developing high-level emotional resilience to the ups and downs of the market. And with VIX clocking in at 28.4 as of yesterday’s close, we need to be prepared for a lot more whipsaw.

I went down a physics rabbit hole this week.

I’ve always been fascinated by Einstein’s theory of special relativity and time dilation. Time dilation is a difference in elapsed time measured by two observers due to a velocity difference relative to each other.

Basically it means that time is not a constant, and it is possible to “travel through time.”

This video does a great job of breaking the concept down into something I have been able to wrap my head around.

If you’re not already, be sure to follow me on Twitter: @MacroOps and on Stocktwits: @MacroOps. Alex posts his mindless drivel there daily.

When ValueWalk first reported that Allergan PLC was planning on engaging in a more aggressive roll-up strategy, citing unnamed sources in corporate meetings and confirmed by someone with visibility... read more

Sustainable economic growth is not the thing which global community must expect. This is the opinion of the latest Fulcrum Asset Management, a one billion hedge fund. (The previous article... read more

If mortgage lenders want to avoid defaults home borrowers who might default, they may wish to carefully consider homeowners with a second lien on their house. A new working paper... read more

Some years ago, James Montier wrote a great paper called – The World’s Dumbest Idea, that explored the problems surrounding the concept of shareholder value and its maximization saying: Q3... read more

In 1986, Peter Munk bought a gold mine in northeastern Nevada for $62 million. Q4 hedge fund letters, conference, scoops etc PublicDomainPictures / Pixabay The mine was only producing 40,000 ounces of... read more

Mawer Investment Management 2014 Annual Commentary 2014 was a special year for the firm, marking 40 years since our founder, Chuck Mawer, decided to open one of the first investment... read more

Edward Thorp My Encounters With Madoff’s Scheme and Other Swindles Uncovering Madoff Fraud by Thorp Excerpt: “On the afternoon of Thursday, December 11, 2008, I got the news I had been expecting for... read more

With the US dollar rocketing higher, a Bank of America Merrill Lynch report, with an eye on foreign credit investors, claims the “year-end could not have come at a... read more