I am bullish on US natural gas. I realize that this is one of the most contrarian things you can say in finance, but I am indeed bullish. Every investor knows that the US is awash in cheap natural gas, but investors often forget that usage and export volumes have also increased rapidly. Meanwhile, pipeline bottlenecks have slowed down the pace of new supply growth. You can drill more wells, but it is becoming increasingly difficult to transport that gas from most basins to end users—at least until more pipelines are built. Call it a race between supply and demand and for the first time in a long time, demand is winning out.

Nothing shows this more than the current state of inventory. As of October 31, the start of the heating season, gas in storage was at a low not seen since 2005. Meanwhile, usage is up substantially since then. To have adequate inventory, gas in storage should have also increased commensurately—yet it hasn’t. 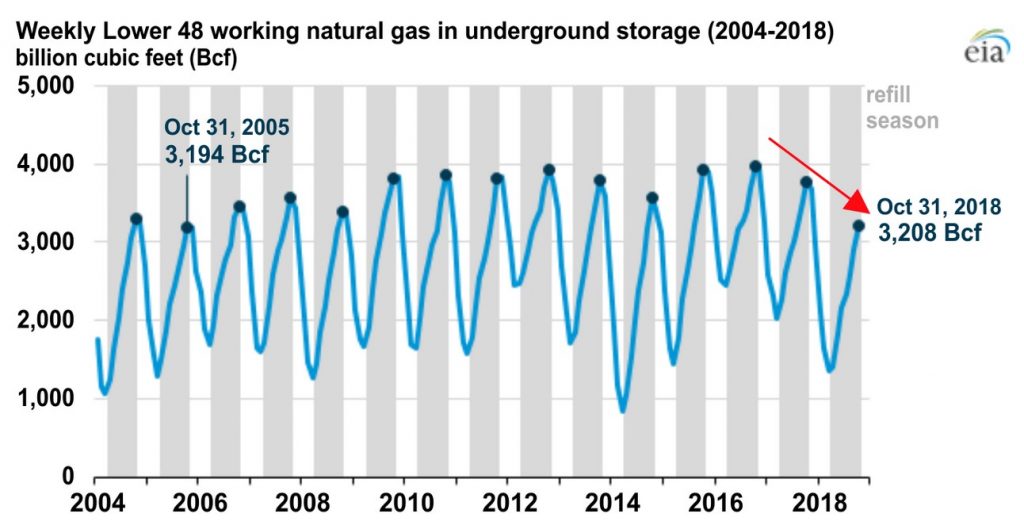 Over the past few weeks, front month gas has spiked. Investors dismissively attributed this to short option volatility funds blowing up and short gas/long oil unwinds. Sure, that’s going on. However, when a market is tight, there will always be some exogenous event that leads to a re-adjustment in pricing. It wasn’t simply a rogue option fund that set prices ablaze—the market was ready to re-price.

The interesting thing is that the rest of the curve has seen minimal movement. This is because a multi-year bear market has convinced market participants that gas will always be oversupplied. Therefore, producers are busy hedging in illiquid deferred months and holding down pricing. Ironically, many commodity bull markets begin with producers locking in every uptick, convinced that prices will decline.

Keep in mind that despite rapid growth in US gas production, hardly anyone has made any money over the past few years—at least in the traditional sense. This is because shale wells decline rapidly and when gas is in the $2’s, it simply isn’t profitable to produce gas—ignore what the corporate presentations claim. Despite recurring losses, companies have spent fortunes to increase production, hoping that cash flows would eventually catch up with spending. Along the way, they’ve taken on substantial debt.

As a result of this never ending spending, investors have finally had enough. Activists are circling and there is a clear message to management teams; spend within your cash flows and focus on returning capital to shareholders. Ironically, if production growth declines, it will trip many companies’ debt covenants. In any case, between shareholder activism and a rising cost of capital, I suspect that production growth will finally slow—just look at how corporate presentations have re-focused from “growth at all cost” to “growth within cash flow.”

My hunch is that gas stays tight all summer and the winter of 2019 will see yet another spike in prices—after that, there is a case to be made that gas prices will find a new home in the $3’s instead of the $2’s. With that in mind, I’ve reached out to some smart friends to judge their push-back towards my bullishness.

Question: What about all that byproduct gas from these shale oil plays?

You realize that these things have 50-80% decline curves in the first year. What do you think happens to new drilling when WTI is sitting at $50 and credit spreads start blowing out?

Question:  Don’t you know that gas in the Permian Basin Waha hub is selling for a negative price as producers don’t know what to do with all their byproduct gas?

Sure, but did you know that the Permian gas pipelines aren’t supposed to come online until 2020. After that, a whole lot of the gas is actually going to Mexico or the LNG export market.

Question:  What about all the dry gas plays that can ramp up at any time?

Sure, there will be an increase in gas. If you haven’t looked, existing wells decline rapidly, funding is drying up and demand goes up every year. Besides, the law of large numbers is starting to kick in—an increase in drilling won’t swamp the market like when shale gas first came on the scene. With current decline curves, they need to keep drilling rapidly just to keep production constant—much less deal with growth.

The skepticism is very real—which is what happens after multi-year bear markets. If I told you a few weeks ago that front month natural gas prices would increase by 50% and gas producers would see their shares trade down 20-40%, you would call me insane—yet that is indeed what has just happened. Of course, producers are valued off their future cash flows and with Q4 mostly hedged, NGL pricing suddenly depressed and the strip not moving, I guess it makes sense that there hasn’t been much movement, yet. At the same time, multiple large energy focused funds are getting liquidated and are forced to sell everything—including their gas producers. This has created a unique opportunity to buy into natural gas producers at a time when the thesis is clearly playing out—yet share prices are undergoing forced liquidations.

I’ve spent a lot of time on this site talking about why I avoid resource plays. After spending the better part of a month reading up on decline curves, sweet spots, IRRs and fractionators, I haven’t changed my opinion one bit. Therefore, I’ve focused on large plays with attractive proved out economics, massive drill inventories, substantial in-place production and sufficient take-away capacity. Importantly, I’ve avoided plays with exploration risk, high debt or debt that isn’t well termed out as I don’t want to lose too badly if I’m wrong. I also sought out companies that were further along in the transition from growth at any cost to measured growth, preferably while returning capital to shareholders.

As always, when I invest in resources, I am willing to admit that I’m an amateur (at best). Therefore, I use a basket approach—particularly as I don’t want to learn that I’ve guessed wrong about pipeline capacities in one particular basin. With that in mind, my basket includes SandRidge Energy (SD – USA), Range Resources (RRC – USA), Antero Resources (AR – USA) and Gulfport Energy (GPOR – USA). My SandRidge position is about three times the size of the other positions and makes up half of my gas basket (as Uncle Carl has my back). Rather than show how little I know about energy stocks, I’ll let you learn about these companies on your own. They all have their own peculiarities and flaws. My favorite flaw is that they’ve all spent many times their market caps on land, drilling and infrastructure—it could be said you’re buying someone else’s sunk costs at pennies on the dollar. They also have substantial in-place production, which could be quite valuable if gas prices increase—even if there are some hedges for 2019.

As always, commodity stocks are substantially risker and more volatile than normal operating businesses. Additionally, these companies have shareholder bases that are getting liquidated and can literally trade down to crazy prices. Caveat emptor!

Tadas Viskanta is the Founder and Editor of Abnormal Returns.  Tadas is a private investor with over 25 years of experience in the financial markets.  He is the co-author... read more

Inflation and unemployment are often considered to have an inverse relationship. When employment rates are low, there is competition for workers and wages go up, assuming supply and demand... read more

Raghuram Rajan Departure Shocks The Investing World  with many are worried about the implications for India and the global economy. The news was announced via  a letter posted on... read more

Investment management magnate Cliff Asness has a problem with a Bloomberg View piece on High Frequency Trading (HFT) with particular focus on issues brought up by Michael Lewis in the... read more

Here’s a great video with Joel Greenblatt at the CFA’s Distinguished Speaker Series. During the presentation Greenblatt recounts the story of how he was able to explain the stock... read more