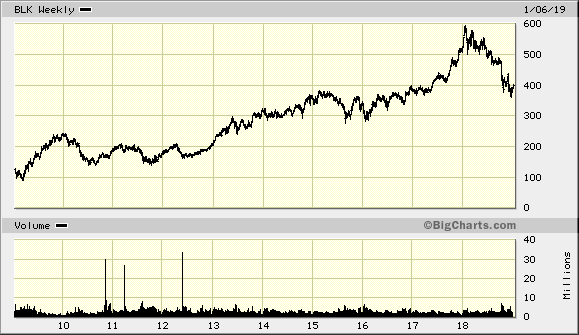 Blackrock (BLK) is the largest investment manager in the world, with over $6.5 trillion in assets under management.

Over the past decade, the stock has compounded by 14.96%/year. Future returns will likely be lower, and they will track growth in earnings per share and the initial dividend yield at the time of investment.

The company has managed to grow dividends for nine years in a row. In 2019, it will reach dividend achiever status. 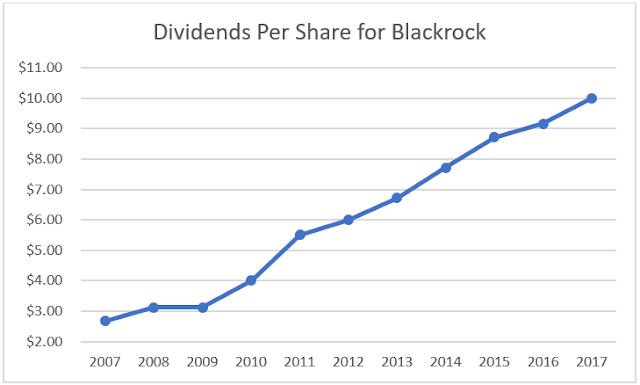 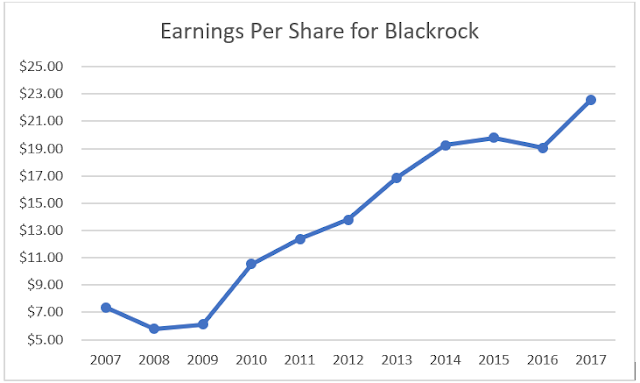 The company is a leader in the asset management industry, with tremendous scale. It also has a diversity of products offered (equity, fixed income etc), geographic diversity ( Americas, Europe, Asia etc) in its products offered and the types of strategies offered ( active, passive, cash management). The company also has diversity in clients served – retail & institutional.
The company is a leader in ETFs, with tremendous inflows coming its way as there is a trend to switch from high cost mutual funds to ETFs. Unfortunately, passively managed ETFs provide a lot of assets, but not as much in profits as actively managed funds. The actively managed funds that Blackrock manages tend to be a portion of the assets, but account for almost half of profits. Actively managed products accounts for a quarter of assets and half of revenues. Passively managed assets account for 2/3rds of AUM, but half of revenues.

Blackrock has managed to grow organically, through new product introductions and through acquisitions. Given it massive scale, it is quite possible that new acquisitions will not have as big of an impact in the long-run. The massive scale does create advantages, since it spreads costs over a larger base, thus ensuring higher profits than smaller competitors. This also offers advantages in distribution as well.

Most asset managers manage to grow the bottom line by attracting new funds from new or existing investors, net of any that sell their holdings. Blackrock has done a great job growing assets organically and through acquisitions over the past decade. If financial markets rise over the next decade, it will also benefit from growing assets under management brought by higher prices. This is a two-edged sword however, because it leaves them exposed in the short-run by market volatility. I do believe that in the long-run, assets will likely go up, bringing a nice tailwind to investment managers such as Blackrock. If we get lower prices in the short run however, we will witness lower earnings per share and lower multiples. This is why I am buying those assets managers on the scale down.

The number of outstanding shares increased between 2009 and 2010, due to acquisitions. Blackrock has been steadily reducing the number of share outstanding since then. Regular share buybacks can increase investors ownership interest in an enterprise, and automatically lift earnings per share. Companies have to be careful however not to overpay for shares they are retiring, otherwise they are wasting shareholder assets. 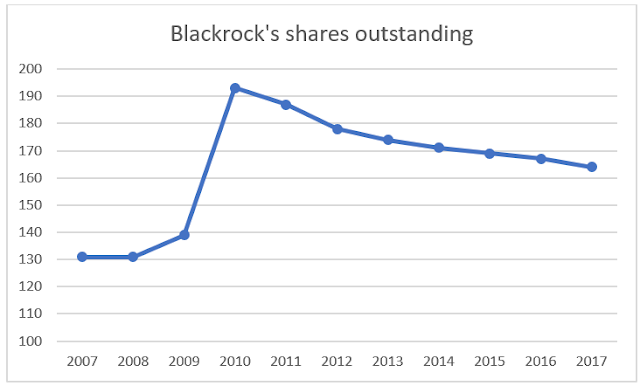 The dividend payout ratio has remained around 45% during the current decade; the only volatility occurred during the 2007 – 2009 financial crisis, when declines in assets under management resulted in lower earnings per share. The company did keep the dividend unchanged in 2009. If 2019 is a tough year for stocks, we may see Blackrock freezing dividends once again. Once things normalize however, Blackrock will likely start growing distributions again. 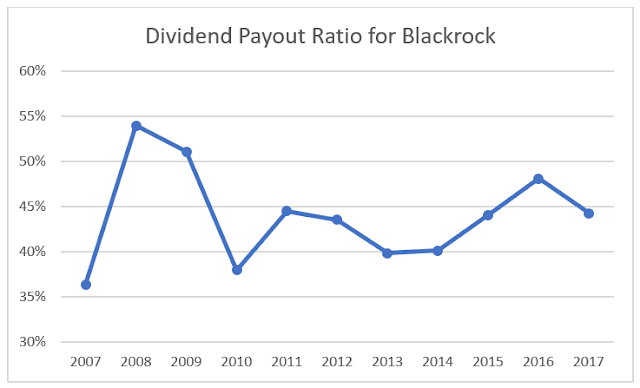 Currently, shares of Blackrock are attractively valued at 14.40 times forward earnings and spot a dividend yield of 3.10%. Asset managers have been on sale as of recently in general, after a difficult 2018.

What could possibly go wrong? That’s the title of a recent research report from Source Research the multi-asset research outfit, founded by ex SocGen analysts. It seems the analysts... read more

Falling Pound Is Nothing But Bad News For UK It is an very interesting time to be a British investor. Since the country voted to leave the European Union at... read more

AOL Offered To buy Business Insider For Over $100 Million

For the first half of 2014, the Matthews Japan Fund (Trades, Portfolio) gained 2.96%, outperforming its benchmark, the MSCI Japan Index, which returned 0.85%. For the quarter ending June... read more

Assets in ETFs/ETPs listed in the United States reached a new record 2.132 trillion US dollars at the end of April according to ETFGI read more