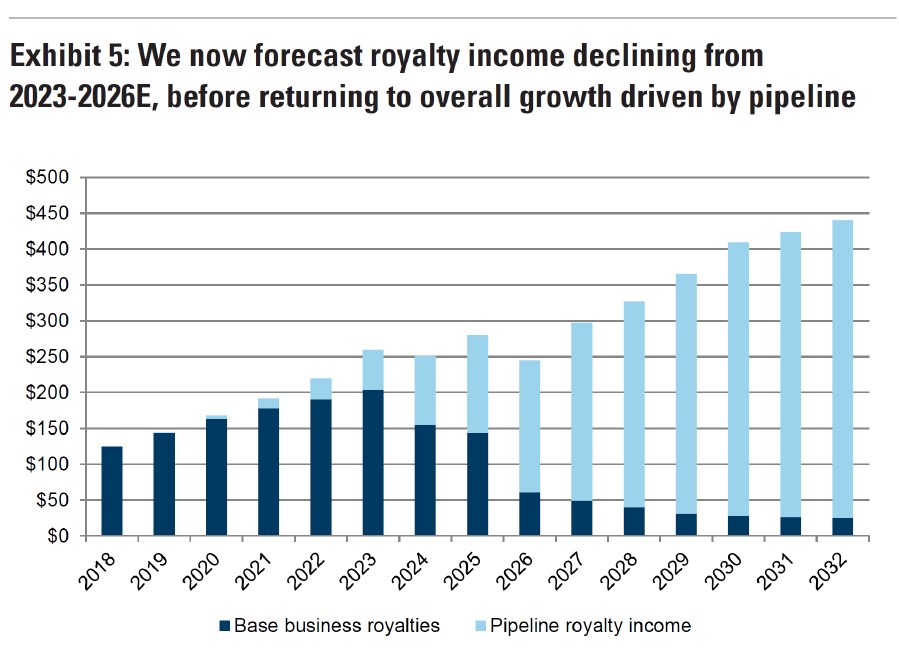 While Ligand has managed to generate some consistent royalties, they are mainly generated from just four approved drugs with one accounting for over 75% of royalties though it will soon begin to lose patent exclusivity.

This chart from a recent Goldman Sachs research report shows the trajectory of their legacy business.

After modeling out Ligand’s future cash flows and adjusting for NOLs and cash, Citron gets to a current valuation of the base business at $20 per share. 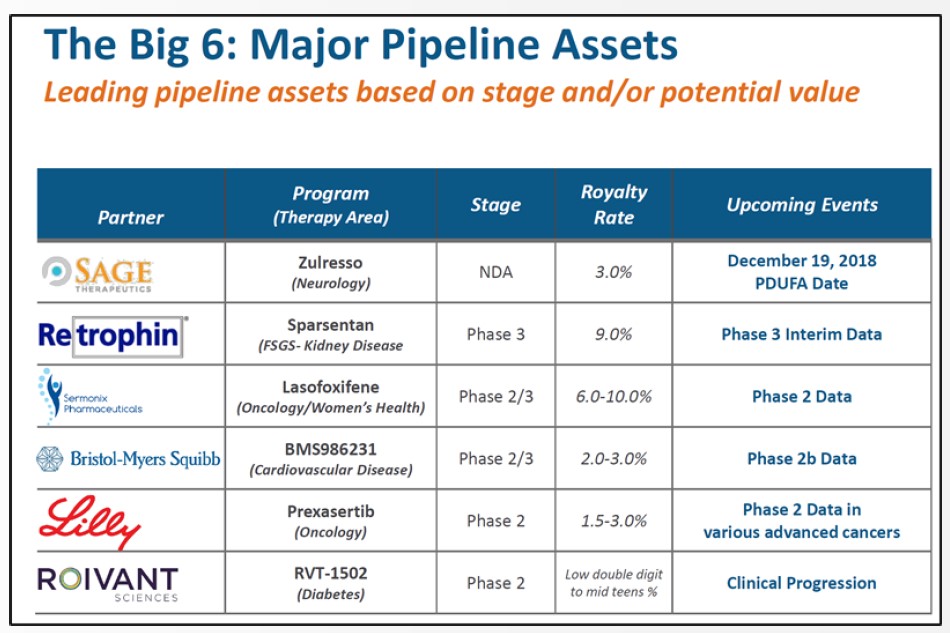 The Myth of the Big 6

“Big 6” has become a term that’s easy for investors to digest, regardless of its validity.

Here is a slide from their recent corporate presentation at Stephens.

As suggested by Grant’s, and proven by Citron, the Big 6 is one big lie. While the company likes to use Lilly and Bristol-Myers in their presentation, the reality is that over 60% of their “milestones” comes from Viking Therapeutics and Vernalis… and wait until you read about them.

Citron Will Now Present The Truth that Ligand attempted to hide from investors. On the next two pages are charts of attribution of dollars and percentages of Ligand’s “Shots on Goal”.

As you look at the charts notice these takeaways that Citron will detail below:

When a company wants investors to buy a stock based on pipeline/milestones but refuses to ever disclose them on a percentage basis that is a warning that should come with skull and crossbones. While Ligand was busy telling investors about the “Big 6”, Citron went into every partnership and has backed out the truth that Ligand does not want you to see. Neither Ligand nor any sell side research analyst has done this level of work on their questionable milestones. 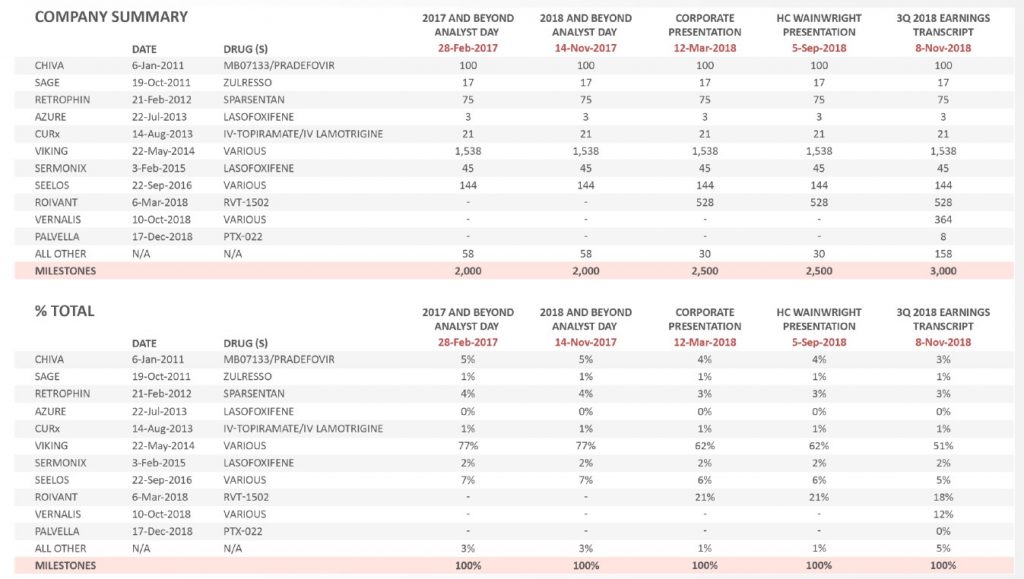 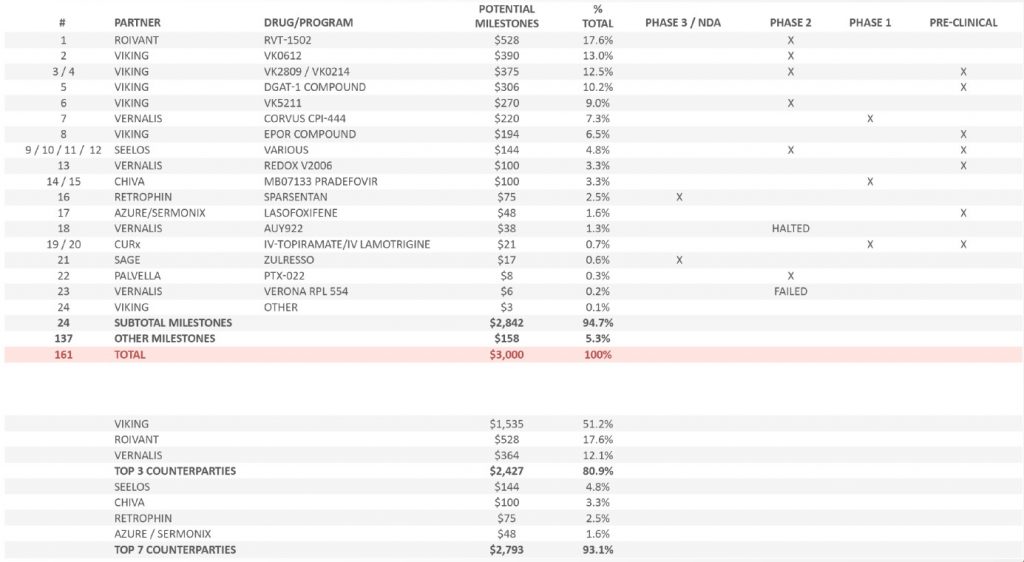 Viking, while left out of the Big 6, accounts for over $1.5 bil or over 50% of potential milestones, Citron will state the obvious why we believe Ligand is not being forthright with investors.

Vernalis, while left out of the “Big 6”, accounts for $364 mil or over 12% of potential milestones, despite the whole company being bought for $11 million. Let’s look closer.

In October of 2018, Ligand completed the acquisition of Vernalis and the deception started immediately with the headline “Ligand Makes Offer to Acquire Vernalis, a Leader in Structure – Based Drug Discovery.” A leader?

Citron didn’t even know you could buy a drug company for $11 million.

Here was the chart of Vernalis stock before the company got acquired – on its way to 0.

shell, Citron has broken down the busted pipeline of the $11 mil Vernalis that is supposed to bring in $364 mil of “potential milestones”. Citron has done the digging and has discovered how Ligand is making these ludicrous claims about Vernalis.

Citron has already knocked out over 60% of Ligand’s Pipeline so now let’s get to 80% using one of the names in the “Big 6”: Roivant.

Roivant, led by controversial pharmaceutical exec Vivek Ramaswamy, accounts for $528 mil or 18% of potential milestones for Ligand. This is from the license of RVT-1502 into Metavant, one of the many “vant” companies under Roivant.

Vivek is known to throw out big numbers that excite investors without much substance. This has nothing to do with AXON. Just look at Metavant, the same “vant” that Ligand is depending on.

Metavant’s pipeline consists of two programs. One program, RVT-1502, licenses a drug from Ligand while the other is a partnership to develop the drug Imeglimin with Poxel. http://metavant.com/our-pipeline/

Roivant agreed to pay Poxel up to $600 million in milestone payments in addition to a $35 million upfront payment and $15 million equity investment, more lucrative than the deal Roivant did with Ligand. https://www.genengnews.com/news/roivant-to-codevelop-poxels-t2d-candidate-imeglimin-in-up-to-650m-partnership/

Yet, Poxel still only has an enterprise value of $41 million. It seems that Poxel investors have look past the hype even though Poxel appears much further along in development than RVT-1502. These drugs are for diabetes, which requires large expensive patient trials. Poxel has a fully enrolled study in Japan with 1,100 people. There are 4 FDA listed studies for RVT-1502 but there are only 264 enrolled patients across the 4 studies.

So, now that Citron has questioned over 80% of the “shots on goal”, let’s go to the credibility of management with their announced partners.

As highlighted by Grant’s, the following questionable companies can be included in the remaining 20% of Ligand’s pipeline.

Sermonix Pharmaceuticals – licensee of lasofoxifene, a well-traveled drug that Pfizer walked away from around the time the FDA warned that the drug put patients at higher risk for death. The business address of Sermonix is a mail box in a UPS store in Columbus, Ohio.

Chiva Pharmaceuticals – Ligand partner that represents $100 million milestone payment that shares the same office address as a telemarketing firm which is a house in Los Altos Hills, CA whose drugs have regressed in the pipeline.

It should be noted that when Grant’s asked Ligand about these partners no response was given.

Well, Citron is now ready to take this a few steps further as we know that a picture is worth a thousand words.

If Ligand had legitimate “shots on goal” then why would they pull stunts like this as recently as a month ago.

On November 21, 2018, Ligand announced a partnership with iMetabolic Biopharma. In the press release, we are told that Ligand “received an up-front license payment and is eligible to receive a tiered royalty on future potential sales of up to 6%.”

iMetabolic Biopharma’s address is listed as 2155 E. Conference Drive Suite 115, which is the same address as a Fertility Treatment Center.

To confirm our suspicions, we sent our team to the office address.

We found no signs that the company exists. We asked the receptionist and she said she’s never heard of iMetabolic BioPharma and that only Fertility Treatment Center occupies the office space. 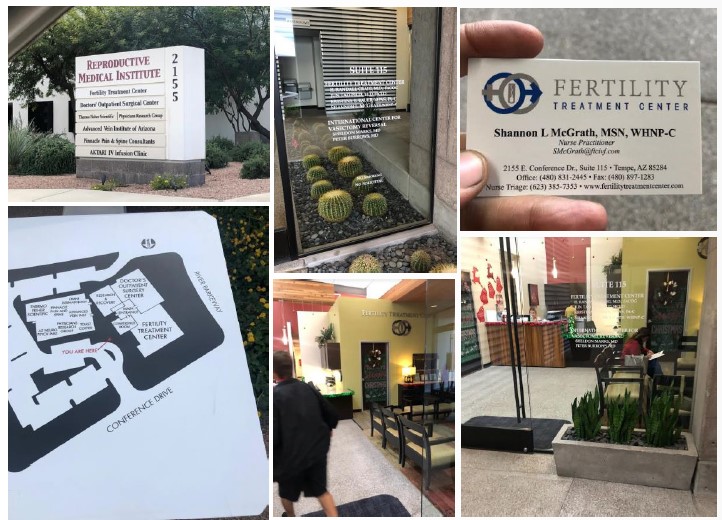 We then called the phone number attached to iMetabolic and found out that they are looking to complete their seed funding round of $1 million and they had $900K left.

This is not an “early stage” company worthy of a press release… this is a science project.

Here is another fun Milestone Company left out by Grant’s.

In 2016, Ligand signed a partnership with Seelos Therapeutics which Ligand touts as representing possible future cash milestone payments of $145 million plus net sales royalties ranging from 4% to 10% for the various programs licensed.

If we look at a recent SEC filing that contains Seelos’ financials for 2016, 2017 and the first 9 months of 2018, we see that Seelos has total assets of less than $525K and liabilities of over $4 million.

Seelos has spent a grand total of $847K in R&D over this period. Of that amount, we believe that $650K were payments related to a relationship Seelos has with another drug company, Vyera Pharmaceuticals (the former Turing Pharmaceuticals).

Seelos also lists an office address in NYC at the back of the S-4. This same address is listed on the company’s website. However, we visited the address and were told that Seelos had not occupied the office space for more than a year while the 25th floor is only occupied by law firms.

Does that sound like the sources of $150M+ in milestone payments and royalties?

All the while as the company has announced these “Shots on Goal” management has been a consistent seller of the stock.

What about Lilly and Bristol-Myers?

Despite being scattered over Ligand promotional investor material and considered a part of the “Big 6”, those larger names only account for less than 7% of total milestone payments. Even though the probability of Ligand receiving all of these milestones is slim – we will give it to them.

give Ligand the benefit of the doubt.

Lastly, though last week, Retrophin provided a corporate update that looks very bearish for Sparsentan as Retrophin even removed

commentary on the slope of the study, we will still give Ligand partial credit for this “shot”.

With all the benefit of the doubt given to Ligand, Citron assigns a price target with shots on goal of $35.

As for shots on goals, Wayne Gretzky famously once said:

Well The Great One also said:

“It’s easier to lose than to win”

…and nowhere is that more true than in drug development.

It is time for Ligand Management to disclose to Wall St the attribution of your pipeline/milestone payments from specific companies and increase your disclosures about the true viability of the pipeline. Once investors see that they do not own a pharma ETF but rather a collections of the lazy man’s sub par assets, Citron expects Ligand stock to reflect its true value.

Despite Big Rally, Russian Market Trades At Forward P/E of 6.4

Russian Stock Market? Jefferies: It could be time to buy Russia again For the past few years, the Russian equity market has been off-limits for most investors. The round... Read More