How Every Asset Class, Currency, And Sector Performed In 2018 – ValueWalk Premium

We’re only a few days into 2019, but it appears markets have picked up exactly where they left off.

There is growing uncertainty and volatility almost everywhere, and individual events are starting to become catalysts for sell-offs or rallies. Whether it’s Apple’s recent profit warning or Fed chair Jerome Powell saying that he is “listening closely” to the markets, investors are taking cues from current events to figure out where the herd is grazing.

It’s hard to say where markets will head in 2019 – but before we get into the nitty-gritty of a new year, it’s worth taking one final look back at 2018 to see how it impacted investors.

Note: Figures for equity markets are not including dividends

As you can see, it’s mostly a sea of red.

Cash turned out to be best option for the year, and several asset classes were crushed over the course of 2018, including crude oil and nearly all stocks. Despite this, large cap U.S. stocks (S&P 500) had no issues in outperforming equity alternatives, like smallcap stocks, foreign stocks, or emerging markets.

Breaking down the S&P 500 further into its sectors, it’s clear that nearly every industry struggled simultaneously.

Energy (-20.5%) and Materials (-16.4%) sectors were the hardest hit, and even the Technology sector eventually capitulated by the end of the year. Amazingly, Apple was considered a $1 trillion company in August, but today the tech giant’s market capitalization has already dropped down to a measly $700 billion.

The one exception to the general trend in S&P 500 stocks was Healthcare, which posted 4.7% returns over the course of 2018. Companies like Merck, Eli Lilly, and Pfizer all saw their stocks grow by double-digits, and it’s possible the sector could stay strong in 2019 as the world continues to age.

The U.S. dollar was the strongest major currency, and the Japanese yen had an impressive year as well. The Aussie dollar was routed, and now sits at 10-year lows.

Lastly, here’s an ad hoc list of some of the biggest winners and losers in 2018 – it includes some of the stocks and assets that saw notable gains or declines over the course of the year: 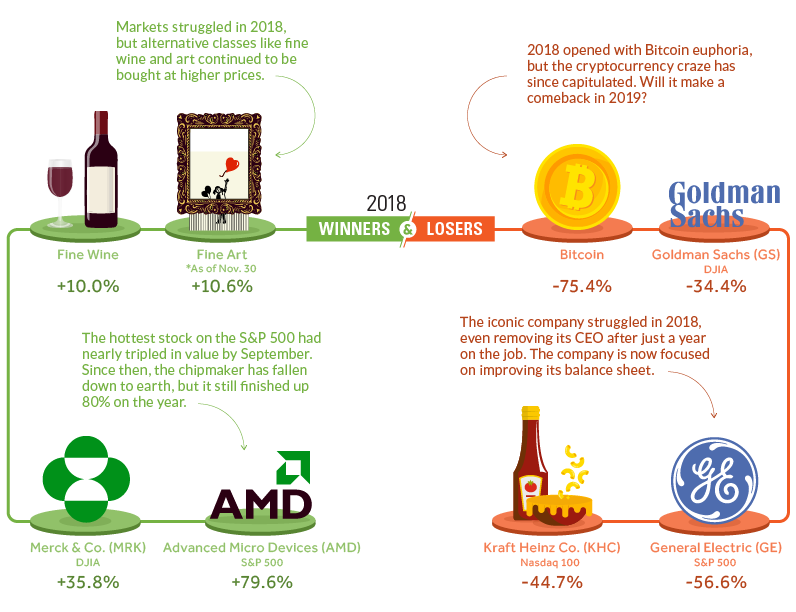 Interestingly, it was the finer things in life that outperformed most major asset classes. Both fine wine and fine art gained close to 10%, leaving most other indices behind in the dust.

AMD had a roller coaster year, finishing up nearly 80% as the biggest winner on the S&P 500. That said, owners of AMD stock may see things differently: the stock had actually tripled by September, and has fallen precipitously ever since.

Given the above recap, what are you investing in for 2019?

The author of this article may have a short position in GlenCore Ivan Glasenberg joined the company just as Mark Rich fled the United States to Switzerland and renounced to... Read More

Top 5 Predicted Outcomes of CalPERS divesting of Hedge Funds   CalPERS’ announcement to divest of hedge funds has created a significant buzz in the media with many people wondering what... Read More

As we previously documented towards the end of June, Undertakings for Collective Investments for Transferable Securities- commonly abbreviated as UCITS- have become an increasingly popular alternative to hedge funds.... Read More