Imagine taking a snapshot in time of Baby Boomers, Gen Xers and Millennials just as each generation was entering the workforce. On average, how would the total assets and debts compare? That’s the premise behind our newest visualization. 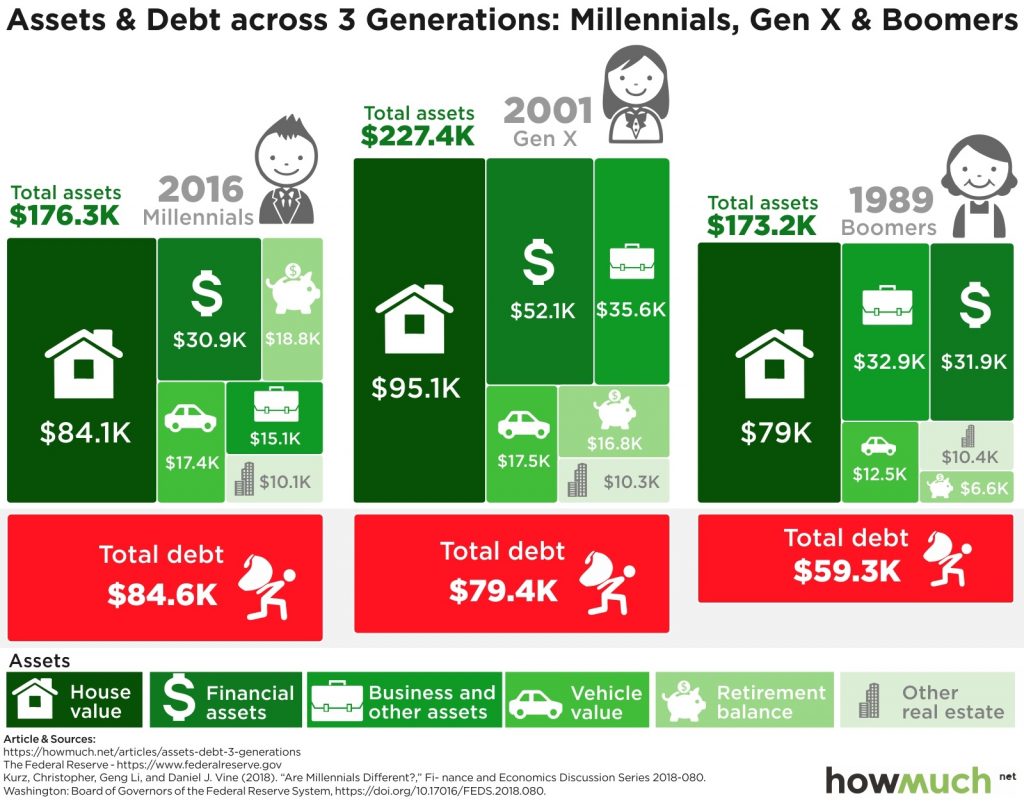 We took a deep dive into some recent Federal Reserve data to investigate the differences in debt and assets between Millennials, Gen Xers and Baby Boomers. First off, we broke down the types of assets each generation holds in aggregate, whether that’s equity in a home, other financial assets like stocks, business assets, equity in a vehicle and other real estate. We then compared the total debt each generation carries on average in red across the bottom, letting you easily get an idea for the relative balance of assets and income for successive generations.

It’s important to bear in mind researchers have adjusted these numbers for inflation. This lets us make a fair comparison, for example, of home values between several different decades. Interestingly enough, Millennials in 2016 on average had more equity in their homes compared to Baby Boomers in 1989, but much less than Gen Xers in 2001. In other words, despite entering the job market right after the housing crash and their reputation for delaying when they purchase a home for the first time, Millennials are actually doing just fine as homeowners.

Things get even more interesting in other asset classes. Millennials are much better savers than people from previous generations, averaging $18,800 in the bank compared to $16,800 for Gen Xers and a measly $6,600 for Baby Boomers. Part of the explanation for why is that previous generations tended to grow their wealth in the form of small businesses. In fact, according to the Small Business Administration, young people today are several times less likely to start their own companies compared to other generations. That’s because the Great Recession discouraged risk taking in the minds of many Millennials, forcing them to be more conservative with their money.

That being said, the total debt loads across each generation tell an interesting story too. Cars have gotten much more expensive, forcing people to put more of their paychecks toward building equity in a vehicle than ever before. Lots of Millennials also take out massive student loans to fund higher education. And that’s because states are routinely decreasing allocations for public institutions, not to mention the increases to tuition at private schools. College is still seen as the best way to improve future earning potential, even if lots of college grads end up in jobs that don’t require a degree. The debt load for Millennials is therefore higher at $84,600 than for Gen Xers ($79,400) and substantially more than Baby Boomers ($59,300). 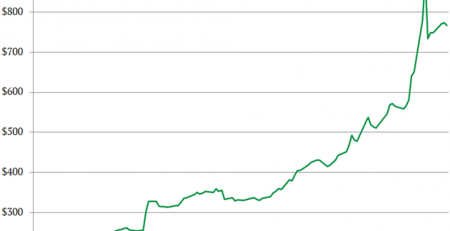 Jeremy Siegel, Professor at University of Pennsylvania's Wharton school, spoke with FOX Business Network’s (FBN) Liz Claman about the stock market and his predictions for the future. When asked whether he... read more

Has The Last Bear Capitulated?

The quantitative easing asset bubble that has driven valuations to historically high levels, driving volatility into the cellar, is going to eventually crash, institutional investors to whom Albert Edwards... read more

FORECASTS & TRENDS E-LETTER by Gary D. Halbert May 8, 2018 Treasury Borrowing Hit Record $488 Billion in 1Q Why Deficits Could be Worse Than the CBO’s Estimates ... read more

Private Debt Opportunity In India - Venkat Ramaswamy, Edelweiss There has been significant interest in and conversation on private credit in the US and Europe over the last few years; however,... read more

Here’s a video interview with Dr. Peter Pronovost, author of the book Safe Patients, Smart Hospitals: How One Doctor’s Checklist Can Help Us Change Health Care from the Inside... read more