January 2019 Data Update 1: A Reminder That Equities Are Risky, In Case You Forgot! – ValueWalk Premium

In bull markets, investors, both professional and amateur, often pay lip service to the notion of risk, but blithely ignore its relevance in both asset allocation and stock selection, convinced that every dip in stock prices is a buying opportunity, and soothed by bromides that stocks always win in the long term. It is therefore healthy, albeit painful, to be reminded that the risk in stocks is real, and that there is a reason why investors earn a premium for investing in equities, as opposed to safer investments, and that is the message that markets around the world delivered in the last quarter of 2018.

The stock market started 2018 on a roll, having posted nine consecutive up years, making the crisis of 2008 seem like a distant memory. True to form, stocks rose in January, led by the FAANG (Facebook, Amazon, Apple, Netflix and Google) stocks and momentum investors celebrated. The first wake up call of the year came in February, first as the market responded negatively to macroeconomic reports of higher inflation, and then as Facebook and Google stumbled from self-inflicted wounds. 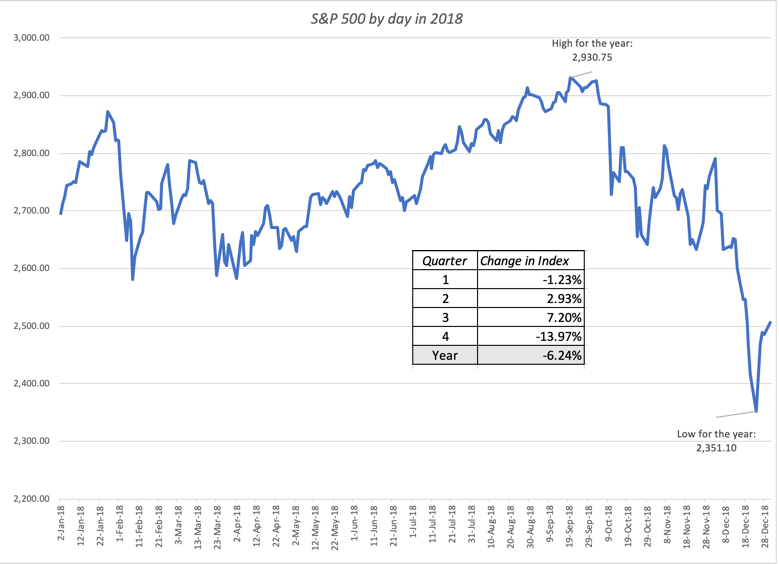 The market shook off its tech blues by the end of March and continued to rise through the summer, with the S&P 500 peaking for the year at 2931 on September 20, 2018.   For the many investors who were already counting their winnings for the year, the last quarter of 2018 was a shock, as volatility returned to the market with a vengeance. In October, the S&P 500 dropped by 6.94%, though it felt far worse because of the day-to-day and intraday price swings. In November, the S&P 500 was flat, but volatility continued unabated. In December, US equities finally succumbed to selling pressures, as a sharp selloff pushed stocks close to the “bear market” threshold, before recovering a little towards the end of the year.

Over the course of the year, every major US equity index took a hit, but the variation across the indices was modest.

The ranking of returns, with the S&P 600 and the NASDAQ doing worse than the Dow or the SD&P 500 is what you would expect in any down market. With dividends incorporated, the return on the S&P 500 was -4.23%, the first down market in a decade, but only a modestly bad year by historical standards: 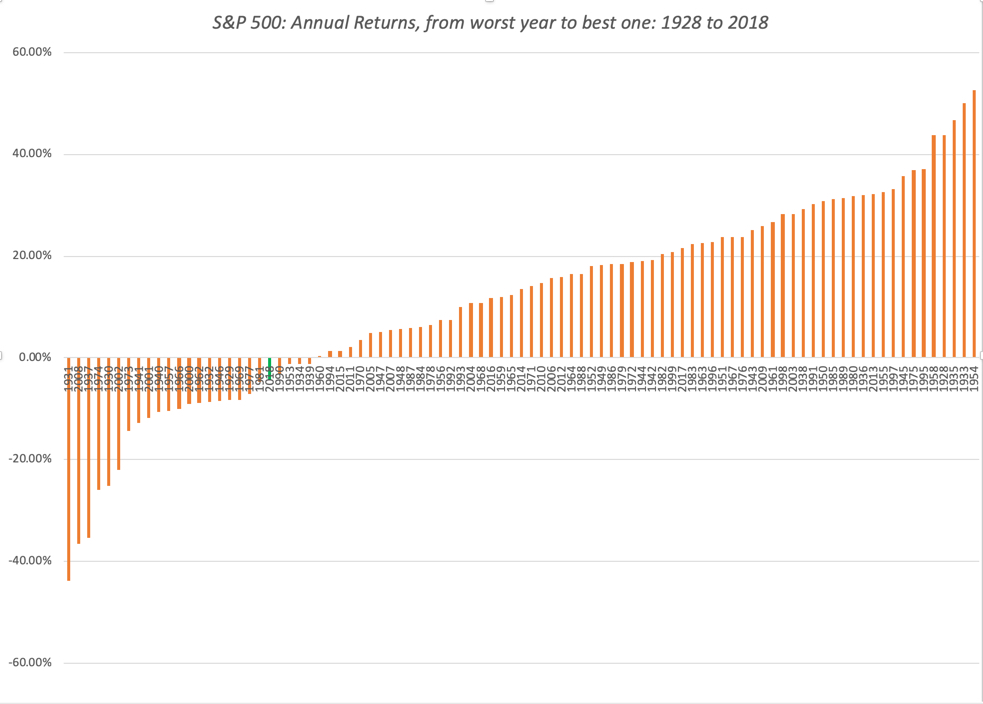 I know that this is small consolation, if you lost money last year, but looking at annual returns on stocks in the last 90 years, there have been twenty years with more negative returns. In short, it was a bad year for stocks, but it felt far worse for three reasons. First, after nine good years for the market, investors were lulled into a false sense of complacency about the capacity of stocks to keep delivering positive returns. Second,  the negative returns were all in the last quarter of the year, making the hit seem larger (from the highs of September 2018) and more immediate. Third,  the intraday and day-to-day volatility exacerbated the fear factor, and those investors who reacted by trading faced far larger losses.

If you have been a reader of this blog, you know that my favorite device for disentangling the mysteries of the market is the implied equity risk premium, an estimate of the price that investors are demanding for the risk of investing in equities. I back this number out from the current market prices and expected future cash flows, an IRR for equities that is analogous to the yield to maturity on a bond:

As with any measure of the market, it requires estimates for the future (expected cash flows and growth rates), but it is not only forward looking and dynamic (changing as the market moves), but also surprisingly robust and comprehensive in its coverage of fundamentals. 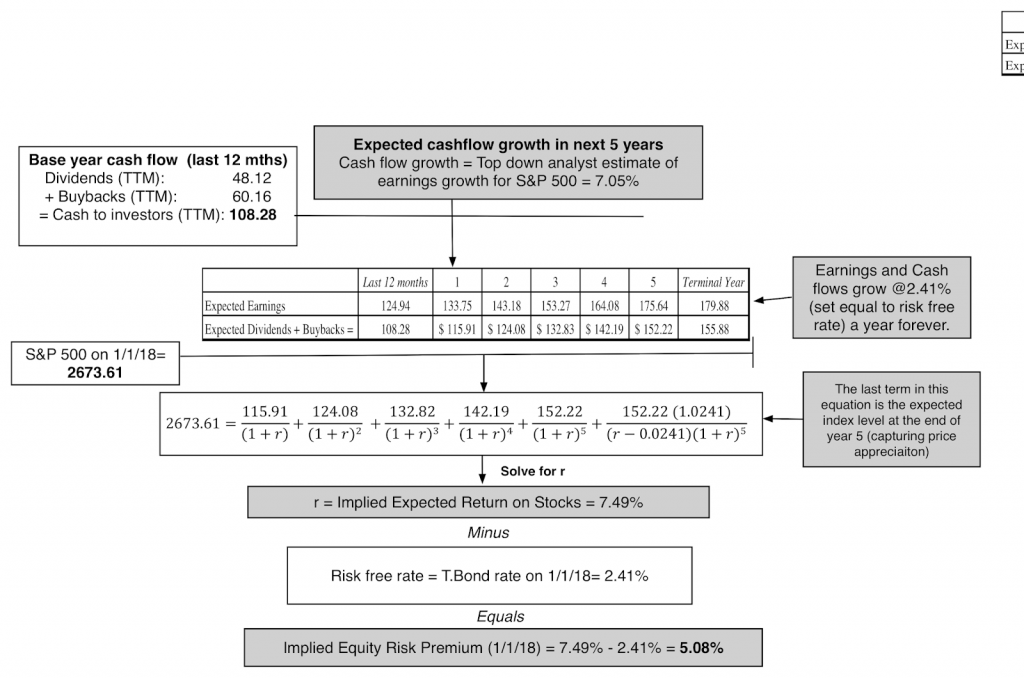 While the conventional wisdom about equity risk premiums is the they do not change much on a day to day basis in developed markets, that has not been true since 2008. In 2018, there were two periods, the first week of February and the month of October, where volatility peaked on an intraday basis, and I computed the ERP by day, during the first week of February, and all through October:

During October, for instance, the equity risk premium moved from 5.38% at the start of the month to 5.76% by the end of the month, with wide swings during the course of the month.

After a brutal December, where stocks dropped more than 9% partly on the recognition that global economic growth may slacken faster than expected, I recomputed the equity risk premium at the start of 2019: 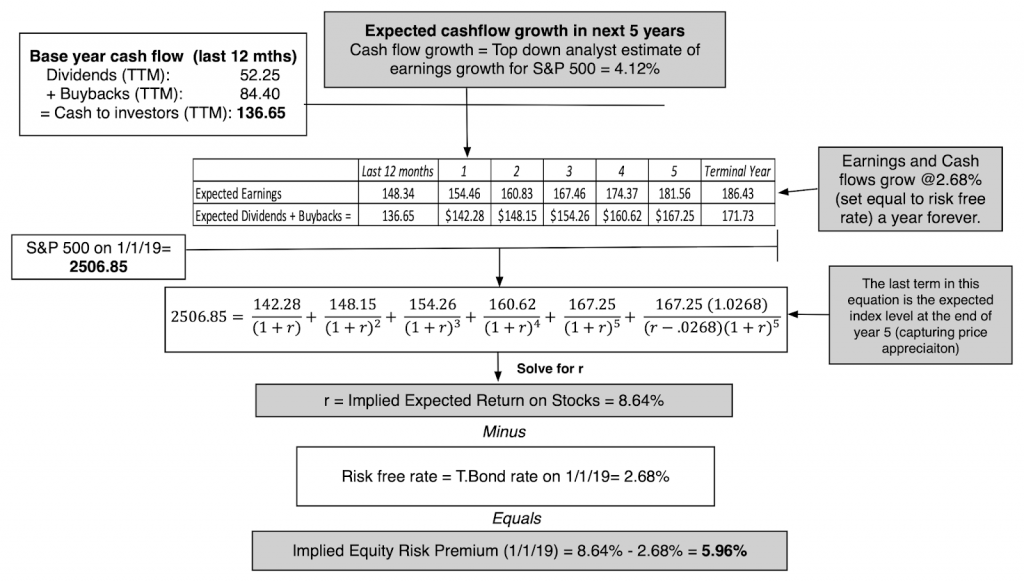 The equity risk premium has increased to 5.96%, but a closer look at the differences between the inputs at the start and end of the year indicates how investor perspectives have shifted over the course of the year: 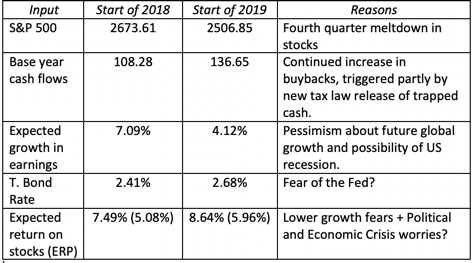 Going into 2019, investors are clearly less upbeat than they were in 2018 about future growth and more worried about future crises, but companies are continuing to return cash at a pace that exceeds expectations.

I know that you are looking for a bottom line here on whether the numbers are aligned for a good or a bad year for stocks, and I will disappoint you up front by admitting that I am a terrible market timer. As an intrinsic value investor, the only market-related question that I ask is whether I find the current price of risk (the implied ERP) to be an acceptable one; if it is too low for my tastes, I would shift away from stocks, and if it is too high, shift more into them. To gain perspective, I graphed the implied ERP from 1960 through 2018 below: 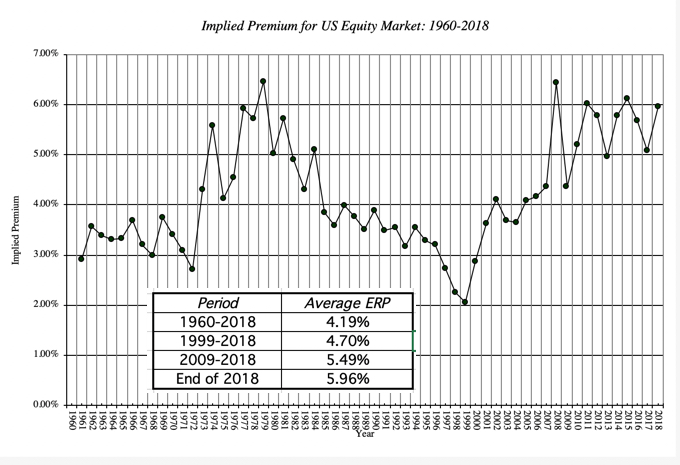 I am fully aware of the dangers that lurk and how they could quickly change my assessment and they can show up in one or more of the inputs:

Looking at how the equity risk premium will be affected by each of these variables, I think that the market has priced in already for shocks on at least two of these variables, in the form of lower growth and political/economic crises, and can withstand fairly significant bad news on the other two.

I have long argued that it is better to be transparently wrong than opaquely right, when making investment forecasts. In keeping with my own advice, I believe that stocks are more likely to go up in 2019, than down, given the information that I have now. That said, if I am wrong, it will be because I have under estimated how much economic growth will slow in the coming year and the magnitude of economic crises. Odds are that I will see the tell tale signs too late to protect myself fully against any resulting market corrections, but that is not my game anyway.

Unlike so many others who criticize Bernanke and his bold monetary easing policies, Buffett has always taken a positive view of the Federal Reserve's chairman. He called Bernanke a 'gutsy... Read More

We’ve discussed this on and off for several years now. Civil asset forfeiture is a legal process that allows the government to seize assets and cash from citizens without... Read More

While MF Global announced its bankruptcy in October, its tentacles continue to be far-reaching, especially toward its regulator, CME Group. On Wednesday, they struck again as the exchange saw... Read More