Investing in stocks not traded in our own country requires us to assess the foreign country’s rules and laws that govern its political and economic systems.

And, once you have a firm grasp of their economic and political systems, an event like Brexit will come along creating clouds of uncertainty among investors, which we can profit off.

We’ll discuss the situation in the UK regarding Brexit, as a prime example. Because of the mainstream media’s pro EU bias and constantly producing news stories predicting doom and gloom for the UK economy – hence why they’re called Remoaners – has caused a lack of public confidence in the UK.

After reading, watching and listening to the mainstream media you’d be left thinking that the UK economy will falter and become a third world country, if no deal is reached and a “Hard Exit” occurs on the 29th of March, 2019.

It is precisely in these conditions of great uncertainty when great investment opportunities present themselves, due to the herd instincts of investors at the sight of bad news. 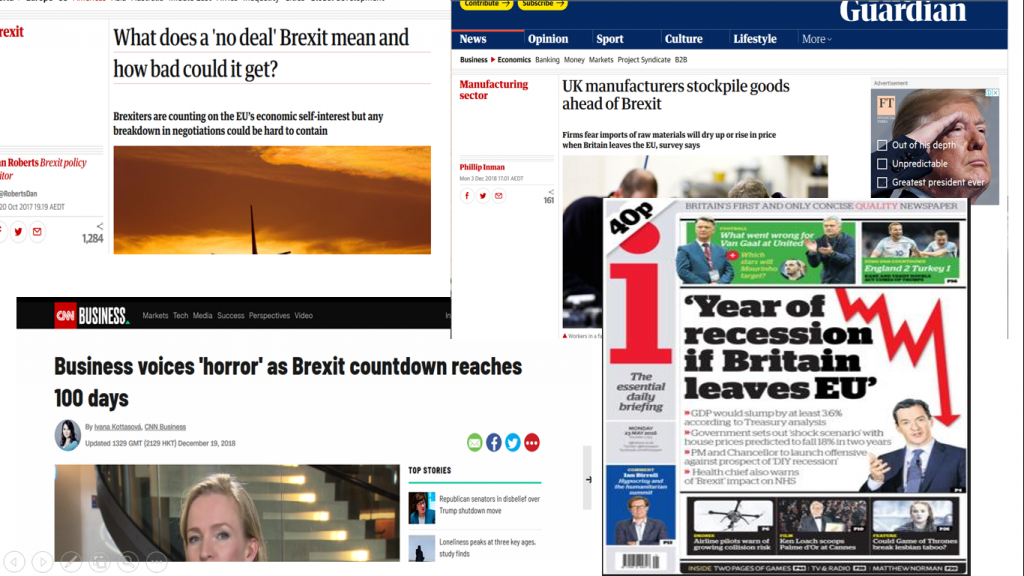 Negative Brexit coverage is impacting public confidence – especially spending – for example, H&M had 60% off sales the week leading up to Christmas, but these large sales are normally reserved for Boxing Day.

And, it as further reported in The Australian newspaper, the last survey by the [UK] Institute of Directors, shows business leaders’ confidence in the British economy has slumped to “trepidation”, its lowest level in more than 18 months!

This is due to the expected costs of Brexit after March 29th.

But I’m not convinced that it will be all doom and gloom for the UK economy, even if no deal is made before the 29th of March, and I expect it will thrive.

The UK’s largest trading partner is the EU as a block.

And having an EU membership reduces trade costs in the form of;

– The free movement of people. This allows companies to recruit highly specialised skilled people in other EU member countries, without the need to lodge a work visa, which can be a lengthy and costly process.

Upon closer inspection Germany, Netherlands and France are the three main EU country members trading with the UK. 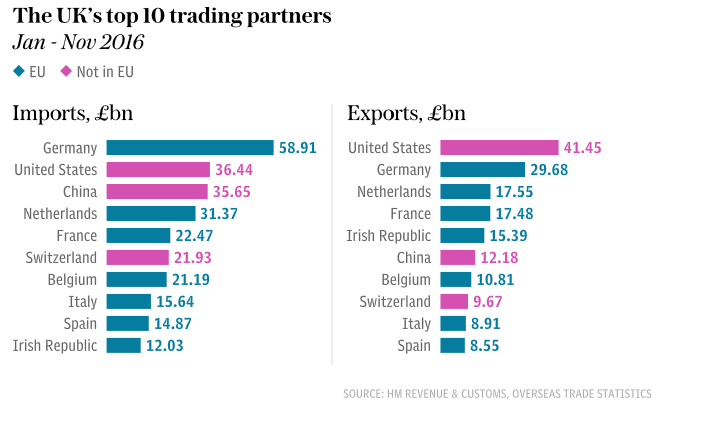 AND A TRADE DEFICIT OF £67 BILLION!

ALSO, THE BALANCE OF TRADE WITH EU & NON-EU COUNTRIES IS WIDENING! 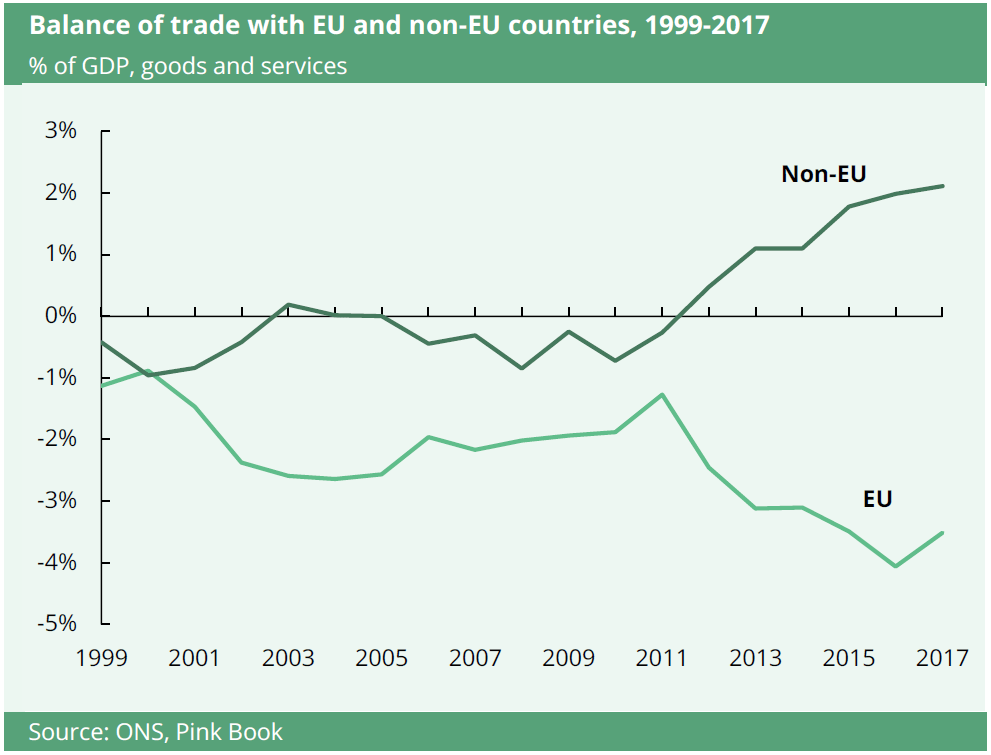 The above graph doesn’t take into consideration the Rotterdam effect, which could further widen the balance of trade gap between the EU and Non-EU. Meaning that the exports to the Netherlands may actually be going to non-EU countries.

The benefits of free trade within the EU block may not outweigh the benefits the UK could enjoy by signing free trade deals with the EU and their non-EU trading partners, such as the U.S. which is the UK’s second largest trade partner.

And we have business owners saying……“WETHERSPOON boss Tim Martin urged Theresa May to seek a complete break from the European Union through the abolition of trade tariffs, suggesting Britain should refuse to pay the £39 billion withdrawal bill to the bloc.” – Reported the Sunday Express. 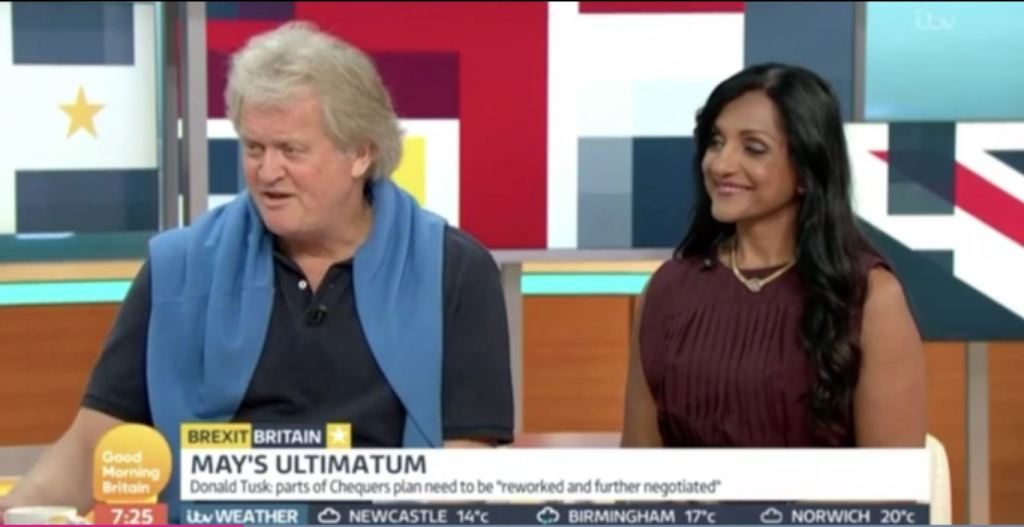 Tim Martin further called on the UK Prime Minister to “forget Chequers” to focus her efforts on securing a Brexit deal that would allow Britain to trade with “100 percent of the world”. 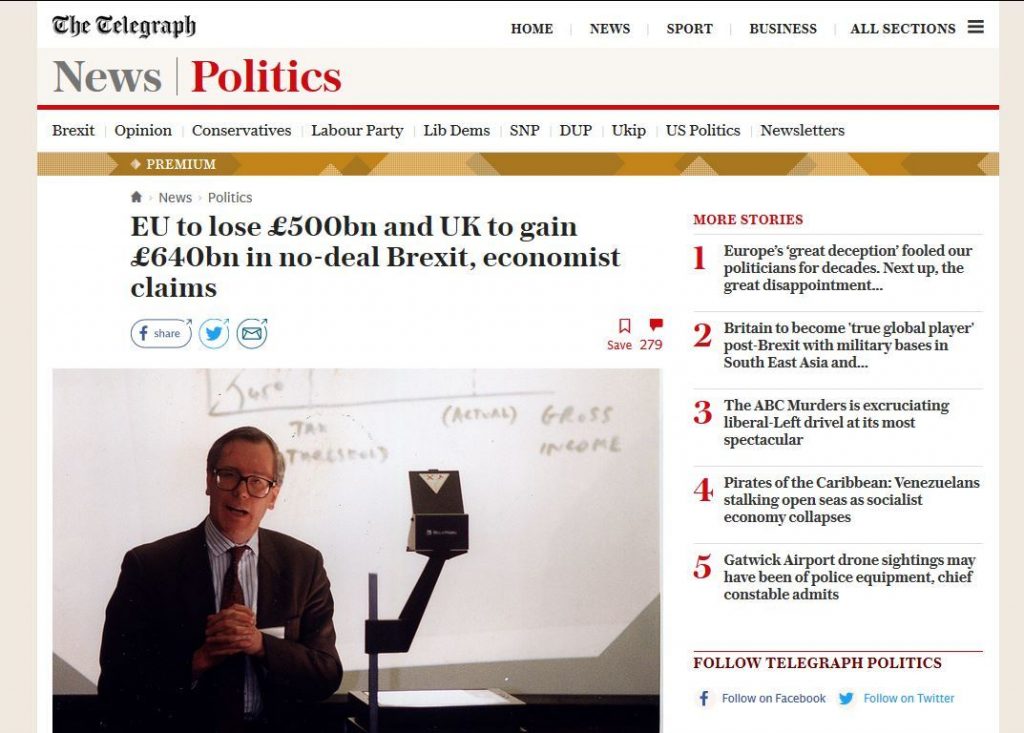 No Deal is Best

The telegraph reported that a study by Patrick Minford, a professor of economics at Cardiff University, states that while a failure to reach a deal would lead to “short term nuisance” for both sides, Brussels would face a “substantial economic loss”, compared to a net gain for the UK.

In the absence of a deal between the UK and the EU, the UK would then be required to follow World Trade Organisation rules on tariffs, which Tony Abbott, former Prime Minister of Australia, had said the following:

“Freed from EU rules, Britain would automatically revert to world trade, using rules agreed by the World Trade Organization. It works pretty well for Australia. So why on earth would it not work just as well for the world’s fifth-largest economy?”

And, Professor Minford agrees, as being qouted in a Huffington Post article the following:

“Of course, it would have been far better if the government, when it triggered Article 50, had started from the position that we would simply leave the EU and move to WTO terms, while offering the EU the possibility of a free trade arrangement. After all that’s what the referendum ballot paper said: a choice between remain or leave and we chose leave – not a deal, confidence leave.”

British Prime Minister Theresa May doesn’t seem to understand that the UK should be dictating the future trade deal terms with the EU. 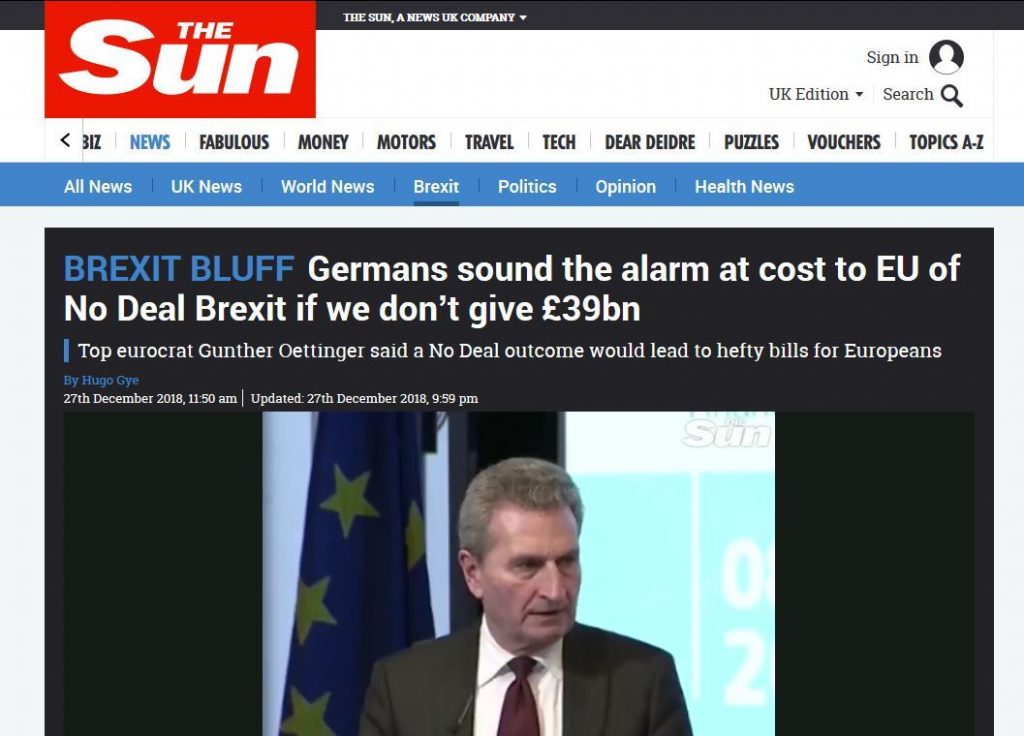 The Big Black Hole in the EU’s Budget.

The President of the EU Commission Jean Claude Juncker has said when he is not either stumbling around drunk or speaking with leaders from other planets, that it would be ‘absolute catastrophe’ for the EU if no deal is made.

EU members will need to make up the budget shortfall by contributing more, which will cause a lot of friction among EU members. I worry about the long-term consequences among EU members if the EU crumbles as a result.

On a balance of probabilities, there will be short-term bumps for the UK economy when the UK Government gains full sovereignty back, allowing the UK to control its own destiny again.

THE INDUSTRIES HIT HARDEST BY BREXIT 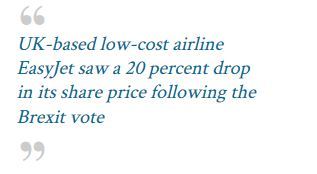 World Finance published an article outlining the industries likely to be hardest hit.

– And, the Financial Services Industry. 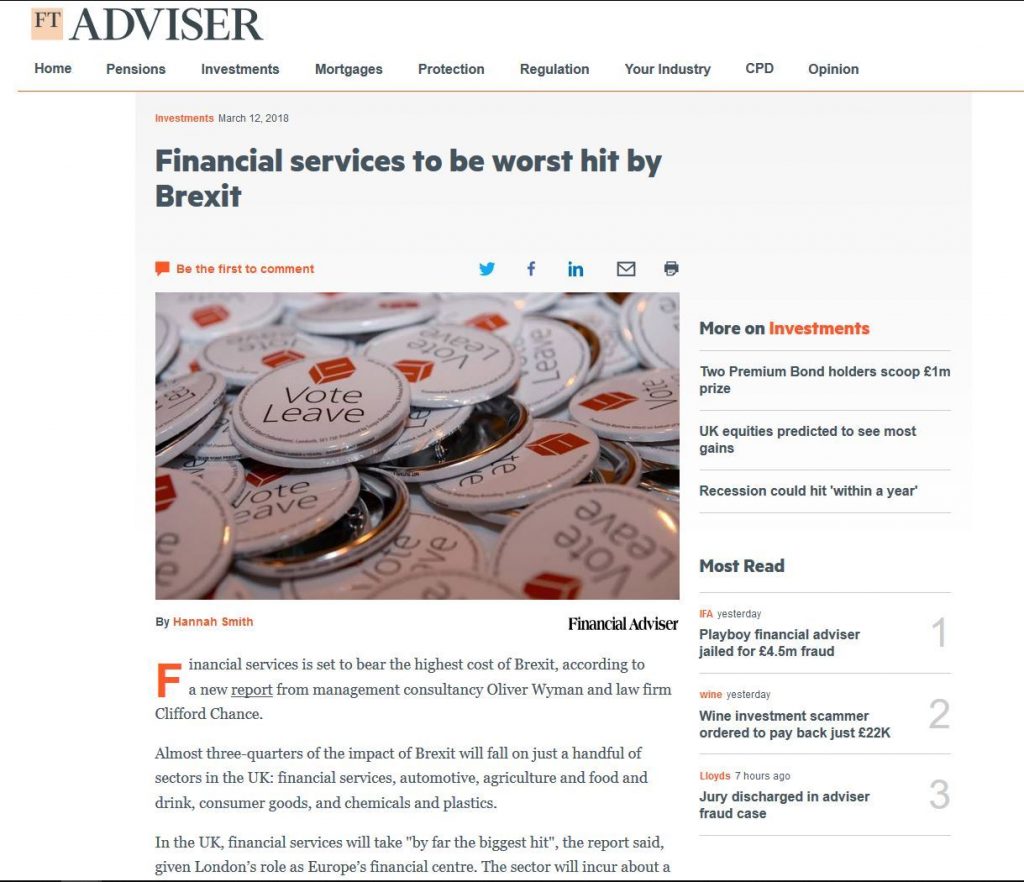 Another company is Ventu Motors (LSE:VTU)

Vertu Motors PLC is a car dealership group based in the United Kingdom, which was established in 2006.

I encourage you to research those companies and add your own suggestions in the comments section.

Deloitte Touche Tohmatsu Ltd has resigned as an auditor for Tianhe Chemicals, as the chemical company faces serious criticism from Anonymous Analytics. This story was initially reported by ValueWalk... Read More

In their recent episode of the VALUE: After Hours Podcast, Taylor, Brewster, and Carlisle discuss Small-Caps Cheaper Than The Market. Here’s an excerpt from the episode: Q3 2021 hedge fund... Read More