ETFGI reports ETFs and ETPs listed in the US gather net inflows of US$51.4 billion during December 2018

LONDON — January 25, 2018 — ETFGI, a leading independent research and consultancy firm covering trends in the global ETF/ETP ecosystem, reported today that ETFs and ETPs listed in the US gathered net inflows of US$51.4 billion during December, bringing 2018 net inflows to US$315 billion. Assets invested in the US ETF/ETP industry finished the month down 5.59%, from US$3.59 Tn at the end of November, to US$3.39 Tn, according to ETFGI’s December 2018 US ETF and ETP industry landscape insights report, an annual paid-for research subscription service.  (All dollar values in USD unless otherwise noted.)

“The end of 2018 saw the trend in developed markets reverse, and although arguably predictable, the severity left many pundits scratching their heads. This end of year stress has widely been attributed to the disruption caused by trade disputes feeding into economic data, and the view policy makers are not going to be quite as accommodating as initially expected. The S&P 500 returned -9.03% during December, and down -4.38% for 2018.   Developed markets ex-US fell -4.62% during December, led by Japan and Canada, bringing the yearly return to -13.21%. Relatively speaking, EM and FM fared the month better, returning -2.68% and -3.15%, finishing 2018 -13.53% and -11.82%, respectively” according to Deborah Fuhr, managing partner and founder of ETFGI. 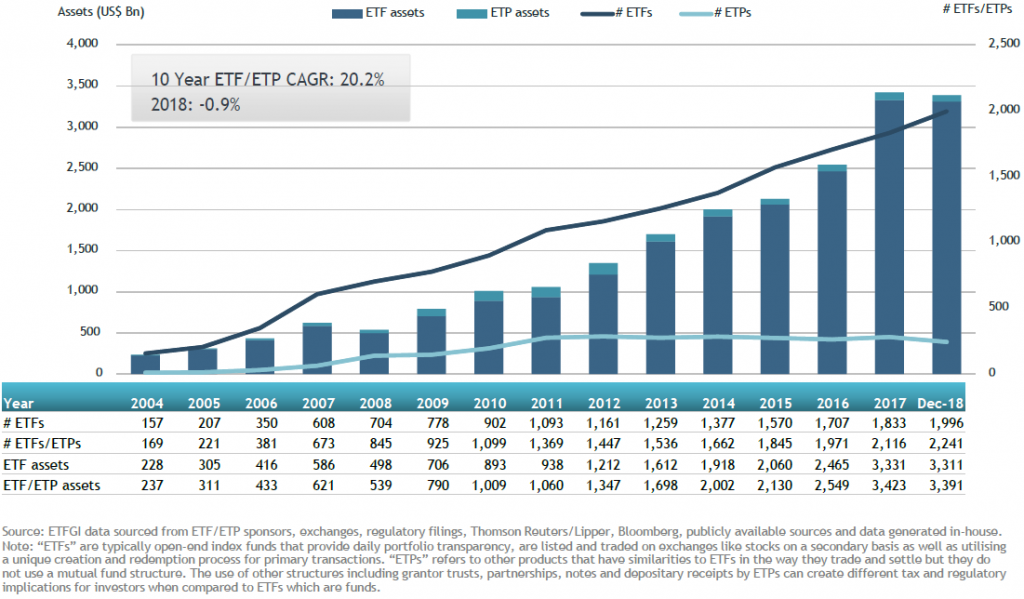 Substantial inflows during December can be attributed to the top 20 ETFs by net new assets, which collectively gathered $38.3 Bn. The iShares 1-3 Year Treasury Bond ETF (SHY US) gathered $3.36 Bn, the largest net inflow in December.

Similarly, the top 10 ETPs by net new assets collectively gathered $2.10 Bn by the end of December 2018.

“Credit expansion is the government’s foremost tool in their struggle against the market economy. In their hands it is the magic wand designed to conjure away the scarcity of... read more

Having spent a large proportion of my career prior to joining GMO working at investment banks, I’m well aware of what Andrew Smithers describes as “Stock Broker Economics,” the... read more

This report highlights last month’s top performers and features a stock from the current portfolio. April’s Dividend Growth Stocks Model Portfolio was made available to members on April 27,... read more

Net Worth Requirements for Investing in Hedge Funds

Many wealthy and sophisticated investors include hedge fund investments in their portfolios. These funds are entities that manage investment pools using techniques, strategies and financial instruments not normally employed... read more

Daniel Kahneman is the Nobel Prize-winning psychologist who has changed the way we think. It’s all down to luck, he tells Richard Godwin One word keeps coming up in Daniel... read more

There are several bastions of old-school Wall Street that have remained relatively intact despite the recent algorithmic onslaught. Listed derivatives products, with their boring product standardization, transparency and clearing... read more

From Prem Watsa's 2013 letter to shareholders. We will be covering this year's event, sign up for our free newsletter to ensure you do not miss any of it. FAIRFAX ... read more

The 9th Annual Value Investing Congress is underway. Now speaking is John Mirshekari, Fidelity Investments, on the topic of Inflections in Incentives. John Mirshekari is a co-PM of Fidelity Low-Priced Stock... read more