The Eurekahedge Hedge Fund Index was down 0.82%1 in December, outperforming the MSCI AC World Index (Local) which plummeted 7.61% in what turned out to be the worst month of 2018 for equities. The Federal Reserve continued to hike its funds rate in December and announced further tightening in 2019, triggering a sell-off in equity markets around the globe. Concerns over the US treasuries yield curve inversion eclipsed the optimism over the agreement made between Trump and Xi to postpone planned tariff increases, which opened a path for further negotiations. Over in Europe, the Italian government managed to strike a deal with the EU over its budgetary plans, resulting in the decline of the country’s sovereign bond yields. In contrast to the US Federal Reserve’s decision to raise rates, the ECB ended up holding their rates steady while confirming the end of their asset purchasing programmes. Preliminary data estimated that the Eurekahedge Hedge Fund Index has lost 3.35% throughout the year of 2018, contrary to how hedge fund managers were able to generate 8.50% return on average in 2017.

Below are the key highlights for the month of December 2018:

North American fund managers ended the month down 3.29%, dragging their year-to-date losses to 2.96%. The region’s equity markets reacted adversely to the Fed’s rate hike during the month, and recorded their worst monthly performance in 2018. The S&P 500 index was down 9.18% following the equity sell-off, which was exacerbated by the weaker than expected earnings and reduced profit forecasts across the tech sector. The Dow declined 8.66% during the month, firmly placing December 2018 as the worst December for the index since the Great Depression.

Fund managers focusing on Asia ex-Japan lost 2.82% in December, weighed by the underlying equity market performance owing to weak macroeconomic data and China’s slowing economic growth. The Eurekahedge Japan Hedge Fund Index slumped 3.42% during the month, underperforming their peers from the other Asian regions. In comparison, the Nikkei 225 index and the TOPIX were down 10.33% and 10.40% respectively in December. European fund managers also ended the month in the red albeit to a lesser extent, with the Eurekahedge European Hedge Fund Index down 0.90%. Despite Italy’s success in reaching a budget deal with the European Union, investors remained concerned over the uncertainties surrounding Brexit negotiations.

Returns were mixed across strategic mandates in December, with macro fund managers leading the pack with their 1.56% gains. CTA/managed futures mandate followed behind with a 0.93% gain throughout the month, as fund managers successfully positioned themselves to benefit from the falling oil price and weak energy sector. On the other end, event driven, long short equities, and relative value mandates were down 2.78%, 2.62% and 2.55% respectively. The CBOE Eurekahedge Long Volatility Hedge Fund Index gained 7.11%, supported by the spike in market volatilities during the month. The CBOE VIX index jumped 39.68% throughout December. 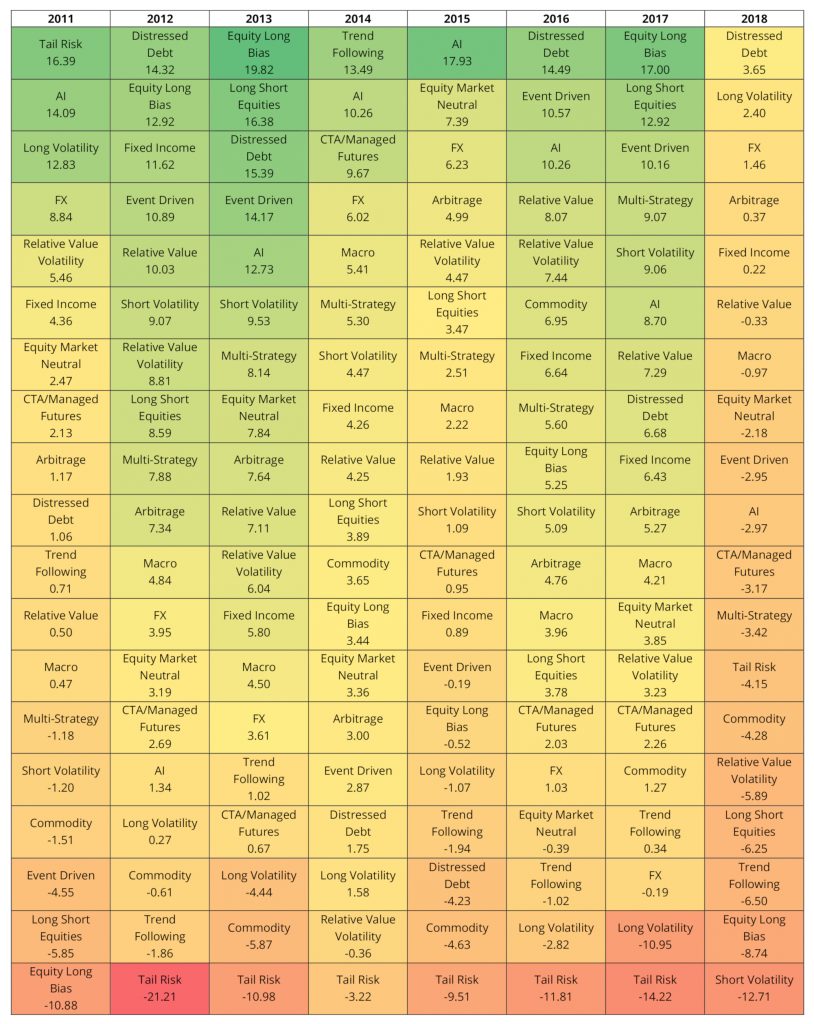 Paul Singer: "Conditions In The Global Economy Are Clearly Abnormal"

Artificially manipulated markets at the hands of speculators or central bankers all are eventually likely to produce the same end result, and that won't be pretty “Conditions in the global... Read More

Over the past two weeks, I have been predicting that JPMorgan Chase & Co. (NYSE:JPM) and Wells Fargo & Company (NYSE:WFC) would beat their earnings estimates.  Turns out my estimate was... Read More

Compared to pre-crisis days, there have been undeniable advances in  OTC derivatives (over-the-counter) management. Markets that were once controlled by a handful of firms who kept a tight grip... Read More

Wilbur Ross Looks Outside US For Value [VIDEO]

Jeremy Grantham: Investing Was So Much Easier 40 Years Ago

Here’s a great podcast with Jeremy Grantham chatting to Barry Ritzholt at Boomberg. When asked about the difference between investing forty years ago compared with today he said: Q3 hedge... Read More