Representatives of the central banks over several months have been feeding investors with speeches about normalization of monetary policy and departure from the currency printing. However, reality has shown that limited activity of central banks means strong declines in the stock prices. As a result, balance sheets of central banks are still swelling, which is confirmed by the chart below (period covered on the graphic ends at the beginning of February 2019 in contrary what the scale presents):

In addition, the European Central Bank, which supposed to tighten up monetary policy, is now more seriously considering the reintroduction of very low-interest loans for companies (the so-called TLTROs). Last friday that was confirmed by Benoit Coeure, one of the ECB members.

Let us remind that due to successive signs of the coming recession, mainly in Europe, various type of institutions (including the FED and the IMF) have recently begun insistently promoting negative interest rates. Of course, in case of introducing significant negative interest rates (which means that people will be paying to the bank for money deposits), many people will decide to withdraw cash from the bank. Therefore, it is possible that if negative interest rates will be introduced it will be done along with a few changes that will discourage people to keep the cash.

Interestingly, almost a year ago,  the topic of negative interest rates and falling cash use in Sweden or Norway has been discussed by Benoit Coeure mentioned above. The ongoing war with the cash has been described in the article ” War on cash gains fresh impetus” https://independenttrader.org/war-on-cash-gains-fresh-impetus-1.html.

At this point, it is worth to note that significant negative real interest rates in the past meant an increase in the price of gold and silver. Adding to this story the ongoing currency destruction, the conclusion is that the precious metals should be a large part of the investment portfolio.

The People's Bank of China's gold reserves rose by almost 12 tons in January and totalled 1,864 tons. It was the second consecutive month in which Beijing officially bought the metal (in December the reserves increased by 10 tons). Previously, over 2 years, China did not even mention the yellow metal, and the total amount of gold held was 1842 tons.

We emphasize the word “officially” because China very often does not inform about the growing gold reserves. The Middle Kingdom is the largest producer of gold in the world, and therefore it can easily hide the true level of reserves. It can be done usually through the largest commercial banks that are under state control.

Official information about Chinese gold purchases should therefore be taken with a grain of salt. The information on the total amount of gold concentrated by all central banks around the world remains a much better reference point. In this case, the highest level in 50 years has been reached in 2018, which also some part in it had the National Bank of Poland.

The increase in gold reserves symbolizes, firstly, a fall in confidence in the reserve currency, which is the US dollar, and secondly, securing itself in the event of a drastic devaluation of currency in circulation. With the current gigantic debt of most countries, governments can lead their countries to high inflation, which will devalue debt. In such conditions, public confidence in the currencies used today can significantly fall. One way to regain this trust may be linking the currency to material assets, such as gold.

It is worth adding that if central banks have sufficient gold reserves, devaluation of debt through inflation combined with gold revaluation will make the banking system solvent again.

The stock market in the USA covers the reality

According to what we wrote a month ago, some data has not been published as a result of the suspension of government activities in the US. Now, after reaching agreement, various delayed reports finally started to be released. One of them was published a few days ago and was concerning retail sales in December. It turned out that the sales dropped by 1.2% comparing to the previous month, which was not only worse number than expected, but the worst result since the end of the 2009 financial crisis. 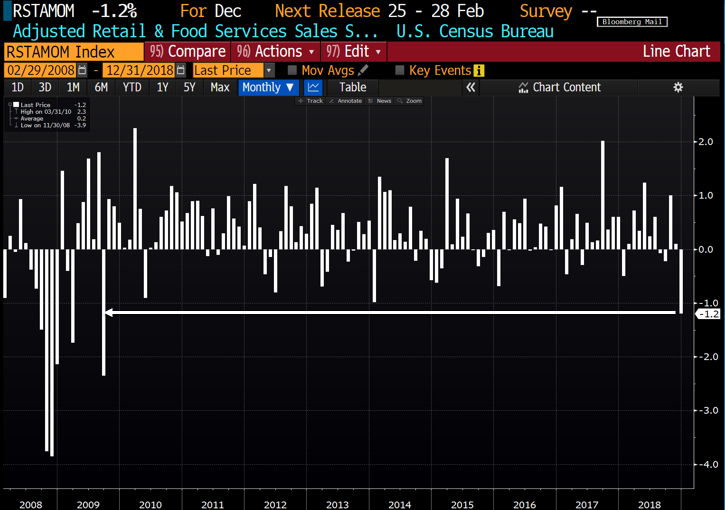 The above data is important because in case of the US, consumption accounts for almost 70% of US GDP.

If we add to the above information the fact that the forecasts of the earnings results of companies for Q1 2019 getting worse (currently they are expected to drop by 2.2% year on year), it is a real surprise that the US stock market is constantly growing.

Moreover, it does take place with the continuing outflow of funds from ETFs, funds which give exposure to the stock exchange in the US (dark green line). 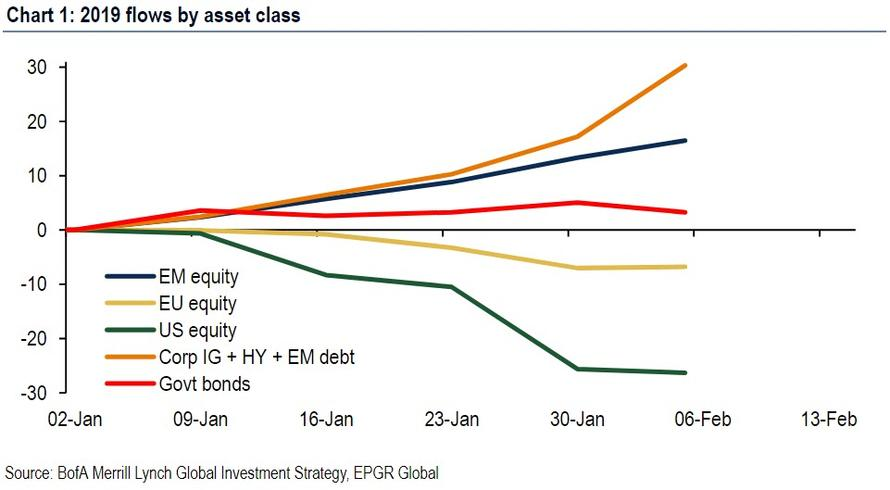 In such an environment, it leads us to the question: who is actually buying?

Considering the period from the beginning of 2019, we were certainly dealing with a classic short squeeze. However, the most important role was played by buybacks (purchase of own shares by companies). They were conducted on a gigantic scale, which is confirmed by the data of Bank of America. According to BoFA, the value of buybacks carried out by the bank's clients were 78% higher than in the same period of 2018.

Artificially supporting the stocks prices caused by the repurchases of companies shares means that the current situation on the market has nothing to do with the common sense. The stock market grows when worse and worse data in regards to the economy are flowing, and the results of the companies turned out to be weaker than last year. Buybacks distorts the market to the point that Senator Marco Rubio proposed a tax to be imposed on share repurchases. If such a proposal were to be taken seriously, the market could lose one of the key sources of support for the stock prices.

Amazon did not pay any federal income tax

After the introduction of the tax reform in the US, the corporate income tax was set at 21%. Unfortunately, tax law in the United States, as in many other developed countries, remains extremely complicated. In effect, the larger companies are able to employ plenty of lawyers who know how to use legal loopholes and decrease the final, actual level of taxation. Medium and small businesses can not afford this privilege.

Another confirmation of this state of affairs is information about the Amazon company, which in 2018 has generated 11.2 billion dollars profit and will not pay for that even a 1 dollar of tax! A year earlier, when the profit amounted to 5.6 billion dollars, Amazon also did not pay any tax.

Regardless of reasons why Amazon has avoided taxation, this example shows how the reality in which smaller and larger companies function diametrically differs. This is another factor that leads to the accumulation of wealth by a small group of people. Other reasons have already been mentioned in our previous articles, including:

For clarity, we want to add that we do not mean that Amazon should pay a 21 percent tax. It would not solve the problem. The point is to simplify the law as much as possible and keep taxes at reasonable levels. It will make easier for entrepreneurs to focus on their activities, instead of analyzing possible solutions in regards to the tax optimization.

Inside the Theranos lab with Elizabeth Holmes [VIDEO]