The company has been in business over 180 years – bringing you products like Tide, Gain, Gillette, Pantene, Crest, Febreze, Pampers and Charmin – and has not only paid but also increased its dividend for 62 straight years.  This makes the company one of a member of the exclusive Dividend Kings list.

However, you might not be as familiar with the man at head of the business, CEO David Taylor.

On July 28th, 2015 Procter & Gamble announced that David Taylor would become President and CEO as of November 1st, 2015. Here’s what the company had to say about Taylor when the announcement was made:

“Mr. Taylor joined P&G in 1980. He has helped to build many of P&G’s core businesses, including Baby Care, Family Care, Hair Care and Home Care. He has led global businesses, and lived and worked in North America, Europe, and Asia. Most recently, Mr. Taylor served as Group President of Global Beauty, Grooming and Health Care. Prior to that, Mr. Taylor was responsible for Family Care and Home Care, both of which delivered consistent double-digit profit and mid-single-digit sales growth under his leadership. He has worked closely with Mr. Lafley on the Company’s strategy to strengthen and focus P&G’s business and brand portfolio.”

Procter & Gamble’s CEO transition is an interesting one. A.G. Lafley was at the helm from 2000 until 2009 when he retired. Lafley then returned from retirement in 2013 to “right the ship.” He worked for two years to refocus the company, before turning the reigns over to Taylor. Here’s what Lafley had to say at the time of the announcement:

“We are leading P&G’s most comprehensive transformation in our history.”

“We are a more focused and balanced company, committed to winning with consumers and creating value for shareholders. We have strengthened our brand and product innovation pipeline, while streamlining our cost structure. With our plans for portfolio realignment essentially complete, P&G is positioned to deliver improved results. The Board and I are confident that now is the time to transition the CEO role to David who will sharpen the strategies and lead the execution of the next important phase of building a better P&G.”

Here’s a nice illustration to show you what that transformation looked like: 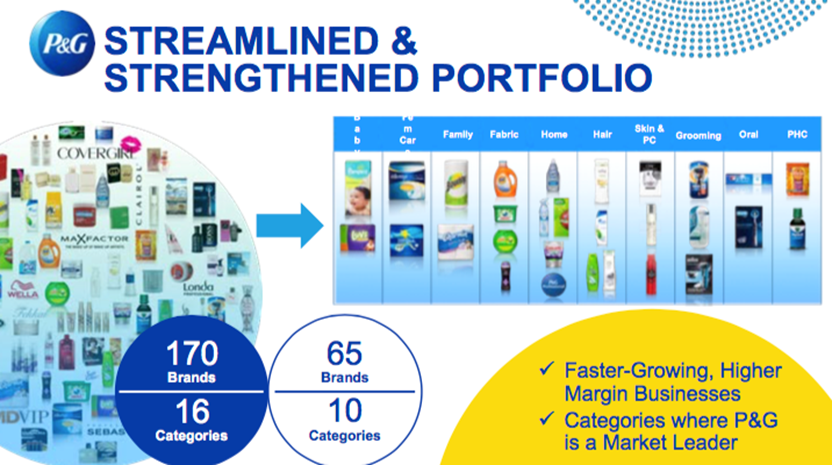 The company went from 170 brands in 16 categories down to 65 brands in 10 categories.  The idea was to cut out (sell off) the non-essential lines of business and instead focus on the faster-growing, higher margin, and market leading brands.

Usually when you have a CEO transition the new boss wants to implement his mark on the business. The interesting part with Taylor is that he was essentially handed the baton without the need for dramatic changes. The business had already been changed. The idea from this point is to continue to focus on a more streamlined operation.

Here’s a look at how Procter & Gamble’s business has performed in the last few years:

Note that P&G’s fiscal year ends June 30th. In the above table 2014 and 2015 have been provided for reference, while 2016 through 2018 represent what has occurred since Taylor took over.

You can see a business transition playing out. Revenues, which sat at $83 billion in 2014, came in at $65 billion in 2016 and have been basically stagnant since. However, you do see margin improvement as the company focuses on its “best” businesses.

Net profit has also dipped and currently sits around $11 billion. Long-term debt has climbed slightly, but not by an extraordinary amount.

On the shareholder side, things have basically netted out. Revenues and company-wide profits are lower, but so too is the share count. Coincidentally, earnings-per-share came in at $4.22 in 2014 and the same $4.22 in 2018. Meanwhile the dividend has continued to grow (for over six decades now) resulting in a slightly higher payout ratio.

Put together, you had many years of “turnaround” numbers under Taylor, but P&G hasn’t yet made the leap forward in terms of underlying per share profitability.

This performance led to a months-long proxy fight with Nelson Peltz’s Trian Fund Management in late 2017. Peltz was advocating for an increased debt position, reduced R&D spending, a break-up of the company and moving the company headquarters.

Here’s a snippet of P&G’s response at the time:

“P&G is a completely different company than it was just a few years ago. The P&G Board and management team identified the changes that were needed and have already been aggressively implementing them. Mr. Peltz’s timing is late to P&G’s turnaround.”

“P&G has already executed a massive productivity program, with another major cost saving initiative underway. The brand and product portfolio has been restructured. The organization is being redesigned, moving to a by-category structure and dismantling the complex matrix. Nearly every aspect of the business is being revamped, from innovation to marketing to selling.”

“The plan is working. Since the Board appointed David Taylor as CEO two years ago, P&G has delivered total shareholder return of 28%, outperforming peers. Sales and earnings objectives are being achieved. Margins are increasing to industry leading levels. Market shares are improving. The comprehensive actions the Board and management have taken to transform P&G and accelerate growth are delivering results. Now is the time to continue to execute and deliver, not risk going backwards.”

We would note that a company should be careful using total shareholder returns as proof that something is “working.” Should the share price turn, as it will undoubtedly do from time-to-time, you must then suggest the opposite – that your plan is not working – regardless of the underlying business performance. Given how finicky share prices are, it’s imperative not to confuse the two as “proof.”

Still, it remains that P&G was very much against adding Peltz to the board. It turned out to be the largest proxy battle in U.S. company history, with both sides collectively spending an estimated $100 million. In the end, the vote was exceptionally close (both parties claimed victory at one point). P&G ultimately relented and added Peltz to the board.

P&G’s valuation has drifted up slightly during Taylor’s tenure (up to ~22 times trailing earnings). However, you can also see from the business performance noted above that part of this was a result of improved earnings off a lower base as P&G works to focus on its core.

Procter & Gamble’s Executive Share Ownership Program requires that the CEO own shares that are valued at 8 times salary. As of the last update, Taylor currently holds approximately 18 times his salary.

Procter & Gamble’s story is still being written, which is something considering that it’s a story that has been going on for over 180 years. In years past P&G embraced the conglomerate role with a huge assortment of brands.

Today the company still boasts a bevy of powerful brands, but P&G has a much smaller product count. We view this as a positive, especially if the company can continue to focus on faster-growing, higher margin, and dominant positions.

The business results in the last few years have had all the markings of a turnaround in the works – lower short-term revenue, but improved margins. What is yet to be seen is whether or not this turnaround actually turns. In particular, employee engagement, brand power, reduced bureaucracy, and evolving consumer trends will be focal points. P&G, now under Taylor’s fourth year of leadership, is in the stage where marked improvements should start developing.

Article by Sure Dividend

The New York FBI has cracked another insider trading case, this time involving employees at the $7 billion Deerfield Management, a high-profile hedge fund whose managing partner warned in... Read More

Liquidity Conditions .... As factors affecting liquidity are unlikely to recede anytime soon, investors should get used to these conditions and factor the risk of lower liquidity into their... Read More 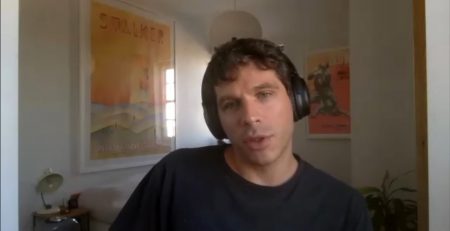 Robert F Smith Creating Expertise Investing Private Equity Get The Timeless Reading eBook in PDF Get the entire 10-part series on Timeless Reading in PDF. Save it to your desktop, read... Read More

European Venture Industry Slows Further In 1Q16 by PitchBook Introduction European venture investment continued to decline in the first quarter of 2016, not only due to intensifying macro and political concerns... Read More