During the last decade we have experienced many market manipulations in order to inflate share prices of mostly large companies. One of these suspicious activities are buybacks which volume rises year by year, starting from 2009. Within last 12 months the so called share repurchases reached their all time high. The reason behind that was mainly due to the corporate tax reform where corporate tax and tax on foreign income were decreased significantly. 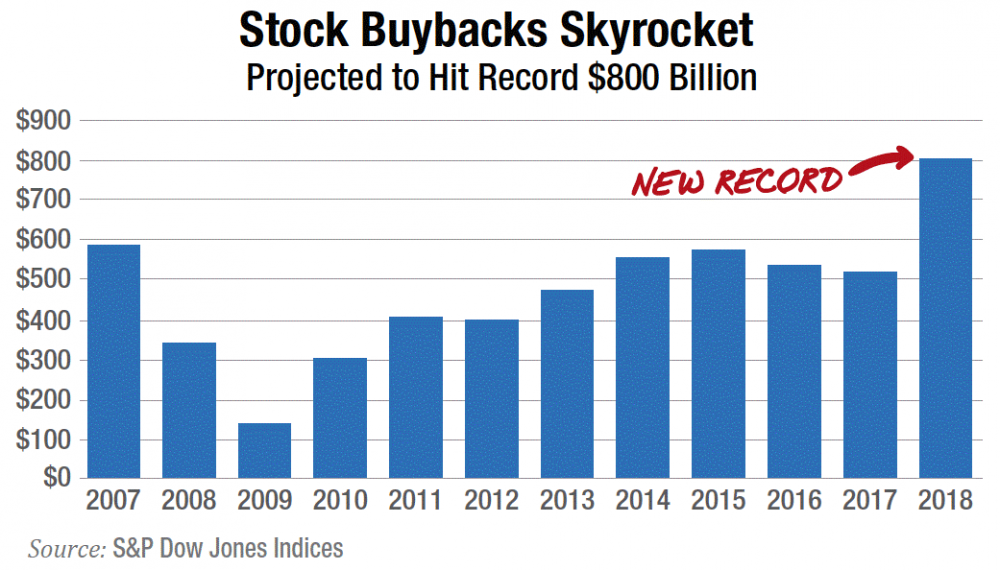 It is worth recalling that the buyback is the process where a company buys its own outstanding shares to reduce the number of shares available on the market. After repurchase, the shares are usually canceled. According to the companies’ quarterly filings, in the first 3 quarters of 2018, S&P 500 companies bought back shares amounting to 583,4 billion dollars, giving 52,6% growth in compare to the same period in 2017. As a result of that process the number of shares in turnover decreased at least by 4% in 18% of S&P 500 companies (which also inflated prices of those shares). In 2019, buybacks are expected to reach roughly 770-800 billion dollars.

This process has a huge influence on stock prices which is clearly showed on the graph below. Red line represents S&P 500 index, blue and green bars represent buybacks and dividends of S&P 500 companies, respectively. This chart illustrates strong correlation between S&P 500 and buybacks, beginning from 2003. 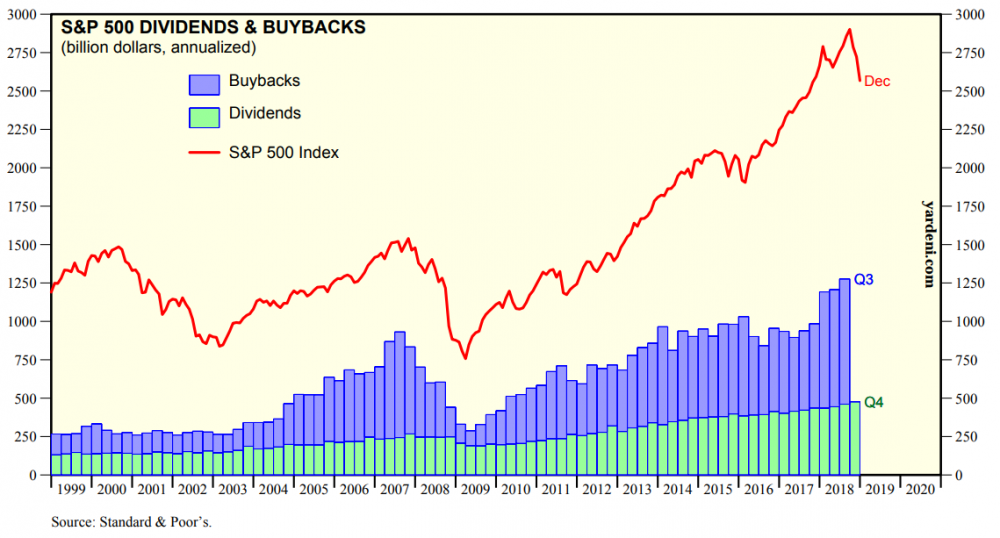 In the recent years the most active in buybacks were tech companies. During the first 3 quarters of 2018, companies known for having the largest amount of cash (Apple, Alphabet, Microsoft, Oracle and Cisco) burned more than 115 billion dollars which is almost 20% of all US buybacks. Furthermore, the pace of share repurchasing is expected to increase in 2019 to as much as 940 billion dollars, which would be a 22% growth relative to 2018.

Apple is known as the most aggresive purchaser of its own shares. It is even more evident since the US corporate tax reform came into play. In first 3 quarters of 2018 they spent 62,9 billion dollars for share repurchases averagely quoted 222,07 dollars, near the peak. Now, when we write this article the stock price of Apple is around 155 dollars, which gives more than 10 billion completely wasted dollars on buybacks. 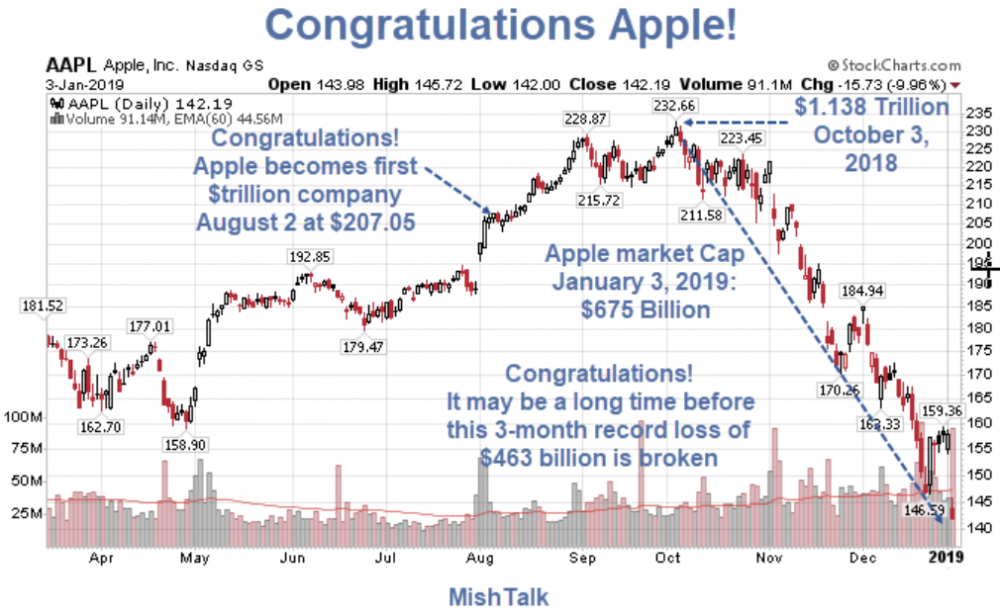 This irrational activitivty seems to be impossible to explain but this is not a coincidence. Within many US companies it is well known behaviour in order to help Insiders get rid of overvalued stocks. They first initiate extremely huge buybacks in order to inflate the share price and in the meantime they sell their own shares on premium. It hasn’t to be mentioned how much it adversely affects on shareholders and companies in the long run. 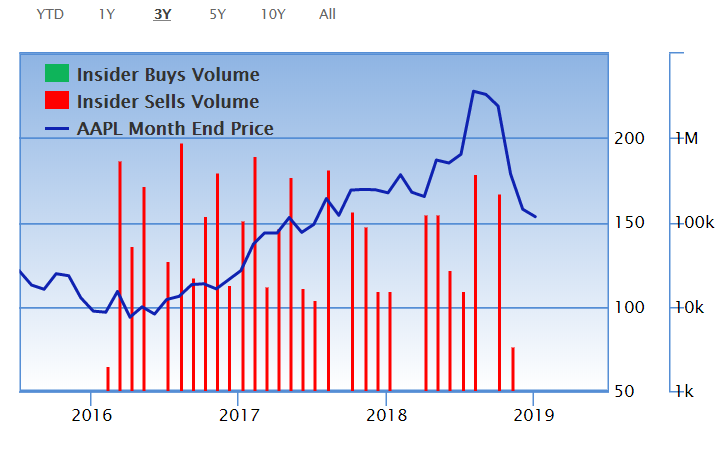 The above graph explains insider moves of Apple during the last 3 years. It is clearly showed that no one of Apple employees bought companies’ shares, they rather massively sell them. Good example is CEO of Apple Tim Cook, who received a bonus of 560 thousands Apple shares. After a few days of receiving them he sold them all getting 121,5 million dollars.

As we mentioned before, many companies act in that way, here we have more examples:

It is worth noting that these huge amounts of money reached only narrow group of people, the so called high level management of the companies.

Despite of the highly overvalued stock prices, insiders still use buybacks. Sometimes this happens due to availability of the cheap credit, which is later used for share repurchases instead of using cash. Herbalife is a great example. The company was issuing debt in order to buy back their shares which almost resulted in a bankruptcy.

Of course, insiders’ motives to do that are strong. Insiders remunerations are linked to the share prices, so when the prices go up they are happy. However, when the share price is falling, management is not opting for buybacks anymore. In this case, no one wants to explain before the CEO why did he risk companies’ money for buying back shares when the price could fall more instead of investing in research and development or mergers and acquisitions.

In reality, in order to care about shareholders and to keep sustainable long term growth, they should not trigger buybacks after a few years of price improvement. They should do that after significant drop in price, and in the best case 1,5 years since the beginning of the bear market. Unfortunately, this is usually not the case. Greed and the lust for money is always directing investors’ and management behaviour which is adversely affecting companies in the long term. The example below perfectly shows this. 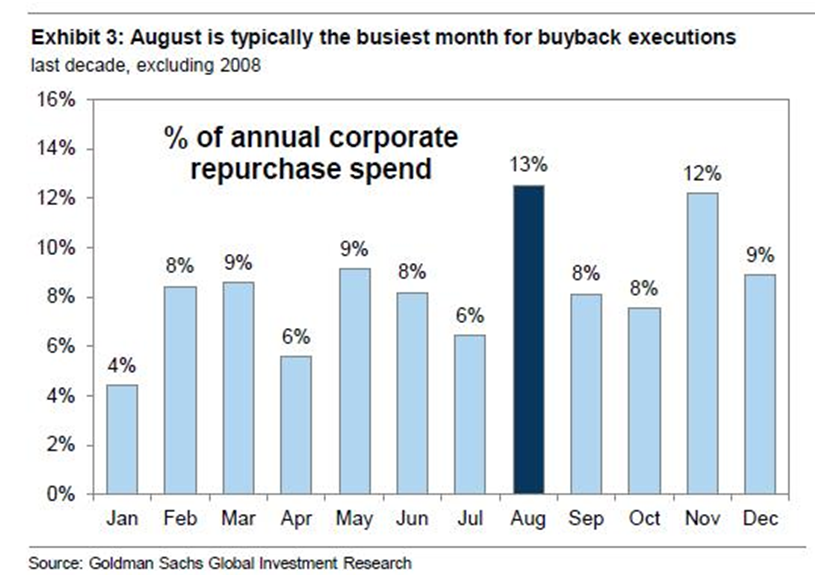 This graph illustrates in which months of the year, over the last decade, the companies repurchased their shares to the largest extent (the sum of all months is 100%). It shows that August and November are the most intense periods when it comes to buybacks.

The next chart depicts U.S. corporate insiders stock sales in 2017 and 2018. The above data explains that managers sold the most stocks in November 2017 and August 2018, in each month reaching 10 billion dollars. 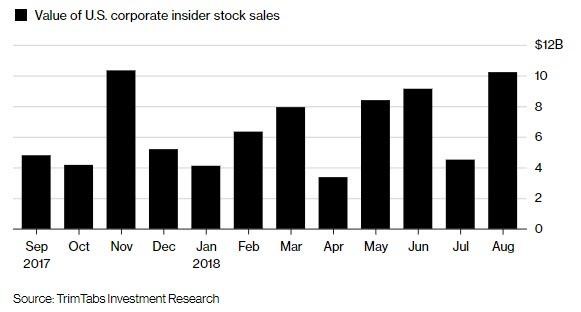 This is an average of 450 milion dollars a day. Do you see any relationship between both charts? In August 2018, buybacks were triggered by the record share prices and the influence of buybacks on share prices helped to sell the stocks for insiders at the fastest pace since a dozen of months. Insiders know their companies like no other and ususally when something is wrong or the stock prices are overvalued they get rid of them. They were right again. Later on as we know, stock markets experienced from 10% to 20% drops in prices.

Another proof of the disruptive behavior of insiders is the study of Robert J. Jackson Jr., a former law professor, member of the Security Exchange Commision (SEC). In the first quarter of 2018, he examined 385 listed companies of the S&P 500 index, which in 2017 have announced buybacks. Two main conclusions based on his work are as follows:

They’ve made 75 million dollars more than they would have earned if they sold the shares before the buybacks were announced.

In the case of 32% of companies surveyed by Jackson, at least one of the insiders sold their shares within the first 10 days after the company announced the buybacks.

Management greed led them to spent huge amount of savings from the corporate tax reform on buybacks. Nowadays, this is a typical form of increasing the managment wealth with only temporary benefits to shareholders. Management remuneration is strongly linked to the share price in a direct or indirect way(they own stocks or options on stocks). However, share repurchases help to sell the stocks for insiders in the way that no one may notice. This also affects the wealth of the rest of society, mostly the middle class. 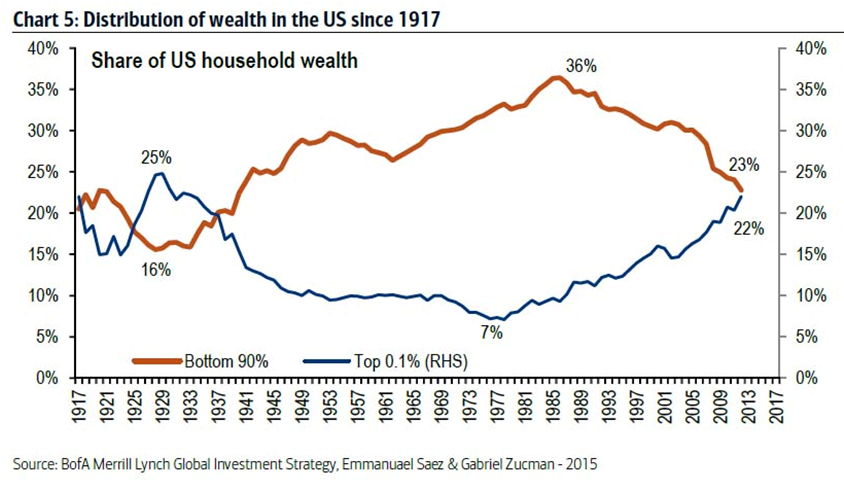 The above chart shows distribution of household wealth in the US since 1917. Orange line represents share of 90% bottom and blue line illustrates share of top 0,1%. In 70s’ (when the gold standard was abandoned) there was a huge difference between both groups. Since then it all started to change and in 2015 both had the same share in US wealth.

You will probably look for a relation between the article and the chart. Namely, most insiders which increase their wealth on buybacks are the part of the top 0,1% group. Those from the bottom 90% rather does not own stocks. Thus, considering the intensity of buybacks, nowadays the top 0,1% group for sure has more wealth than the bottom 90%.

Therefore, we can conclude:

In such a way it will be impossible to solve the problems regarding the wealth inequality. In our opinion one potential solution could be a tax reform which encourage companies to increase their capital expenditure on investments throughout more expansion. Reaching new markets will allow to increase real employment which will lead to increase in real wages. The average person will receive more money and will spend more part of his salary on goods and services instead of letting insiders gain on artificially inflated share prices. In that case, the velocity of money will actually improve.

However, there is a problem which could slow the mechanism mentioned above, which is high debt. To maintain balances in the economy, sometimes inefficient companies have to go bankrupt. This is an integral part of capitalism. But this natural mechanism cannot work with the existence of large stimulus from central banks like Quantitative Easing which does not allow the economy to regulate itself.

According to figures from Eurekahedge, between January 2013 and June 2017, hedge funds managing $1 billion or more have attracted around $160 billion in cumulative investor inflows while over... Read More

I often say a writer is nothing without readers. I am blessed to have some of the world’s greatest. Your feedback never fails to inspire and enlighten me. Q2 hedge... Read More

The latest from Whitney Tilson's email to investors Get The Timeless Reading eBook in PDF Get the entire 10-part series on Timeless Reading in PDF. Save it to your desktop, read... Read More