It’s pretty amazing to see the TSX Composite now at just 4% below its all time high. A far cry from the oversold level of December 24 when the index was 17% off. The pattern is almost identical for the S&P 500, briefly touching 20% below its high and now only 5% away from setting a new record. We’ll save you the trouble of doing math: that’s a 14-18% gain from the lows in less than two months.

During late Q4 we shared our views numerous times – and made portfolio changes accordingly – that the sell-off, while somewhat warranted in direction, was an overreaction. Now, a bit wealthier, we find ourselves starting to think we are seeing an overreaction in the other direction. Naturally this is a much more pleasant type of overreaction.

For now we are not dialling back our equity or risk exposure, but will save those finer details for our Richardson GMP Investor Strategy report out later this week. In this Ethos, we are sharing our best guesses as to what could signal an end to this bull market.

The possible canaries for this bull cycle

Every market cycle is different, and signals of their demise are often only apparent well after the fact. In 2008 it was the housing bust and amount of exposure among levered institutions. In 2000 it just happened, the market stopped being willing to pay nose bleed valuations for internet dreamer ideas and everyone started to de-risk (damn you pets.com).

So what could the early warning signs (aka canary in the coal mine) be this cycle? Our market cycle framework helps drive our asset allocation and is an important macro input for our portfolio management. And this framework has many different models/indicators (30+) that we often score on an equal basis. However there are two we are currently more focused on a potential canaries.

Let’s start by saying that the margins canary is very healthy. In fact, based on aggregate operating margin data for the S&P 500 back to 1991, this canary is about as healthy as it ever has been (chart on page 1). So long live the bull market, this indicator supports a continuation of the current bullish cycle. 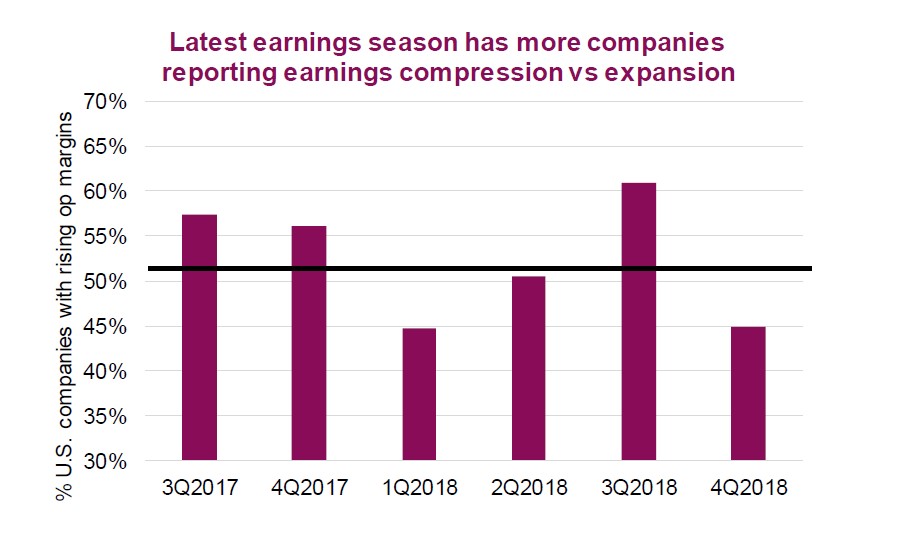 The reason we are watching margins is because it often drives corporate behaviour that can then have a cascading effect on the economy/markets. Over the past few quarters, costs have been rising faster than before. Fortunately, top line revenue growth has also been rising fast enough that margins have remained relatively stable. Our concern is what happens if the costs rise faster or the revenue growth slows. Once margins begin to squeeze, companies start doing things like ‘hiring freezes’ or cutting back on other spending. If enough companies start doing this, you can easily see how this would quickly feedback across the economy and slow growth more. Next thing you know it’s a recession, led by the behaviour of corporations. Don’t worry just yet because remember: this canary is very healthy. 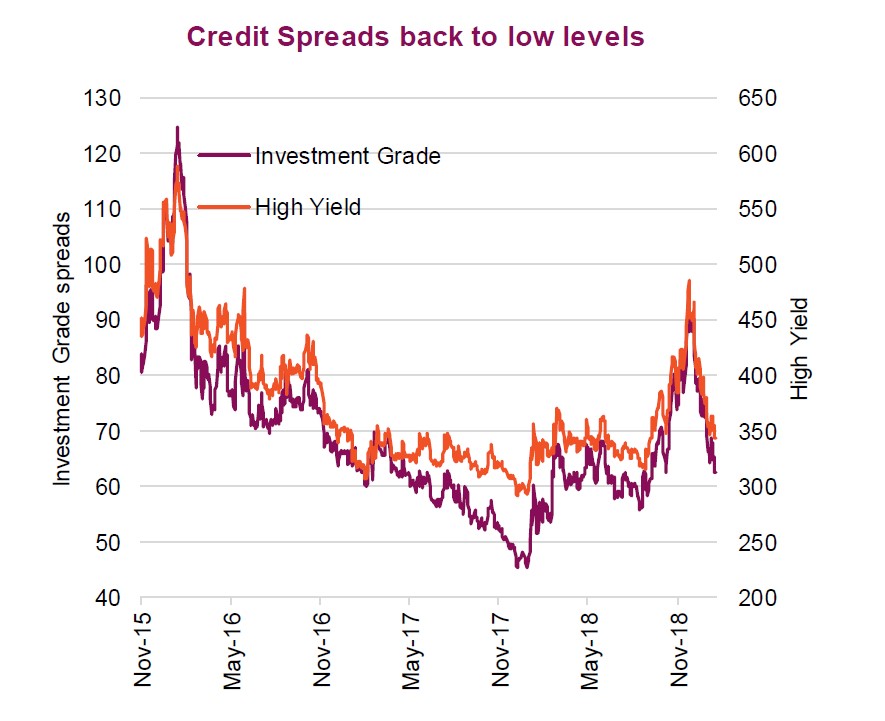 Costs are rising due to trends in the cost of transportation, wages and interest rates. While some of these pressures have abated somewhat over the past few months, the broader trend appears to be higher costs given anecdotal evidence across numerous earnings conference calls this season. On the topline side (aka revenue), growth has been good but most evidence supports a slowing pace of global economic growth which will translate into lower sales growth. We would expect to see margins fall in 2019 and may be starting to see some signs. 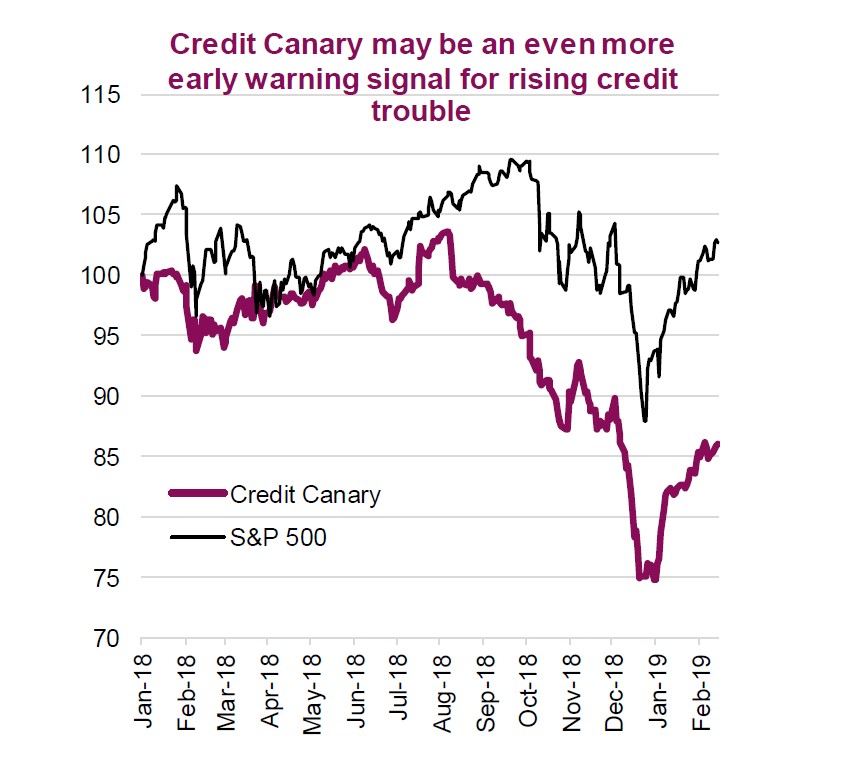 We have started to see some potential early signs of margin erosion. The top chart is across the S&P 1500 constituents measuring how many companies reported improving margins from one quarter to the next. Q4 2018, with most companies reported, came across rather weak. Not that one quarter makes a new trend but certainly worth attention. Weakness was mostly focused on Consumer Staples and Utilities sectors.

Again, margins are still okay but we believe investors should pay additional attention in the quarters ahead … we will be.

Low interest rates for so long caused many investors to reach for yield. This created demand for anything yield oriented, enabling companies to have easy access to capital with limited pushback. This helped fuel multiple years of record merger & acquisition activity, increased financial leverage and companies raising money for share buybacks and dividend increases. None of this is an issue today because yields are still low, the debt market is still wide open and the economy is growing. However, a change to any of these or a less willing debt market may quickly cause problems.

We believe the market has simply become more sensitive to rising yields and widening credit spreads. Now spreads are back to low levels (chart 2) following the Q4 correction, which is encouraging for a continuation of the current bull cycle.

One problem with credit spreads is they are very coincidental, meaning by the time they have risen the markets are usually already selling off. To get an earlier indication of potential trouble in the credit markets we developed an index that includes a number of exchange-traded, closed-end funds that provide direct credit solutions for companies. Think of this as the tip of the spear for credit (chart 3).

For now, the credit market is improving from Q4. So again, this potential early warnings sign is encouraging at the moment but worth close supervision.

We attended the Berkshire Hathaway Inc. (NYSE:BRK.A) (NYSE:BRK.B) annual meeting held on May 4, 2013 in Omaha along with about 40,000 other folks from around the globe who gathered once... Read More

Guy Spier Gets Untied By Richard Hsu via BeyondProxy Guy Spier Sat down to have a conversation with Richard Hsu. Richard is an intellectual property attorney at Shearman and Sterling in... Read More 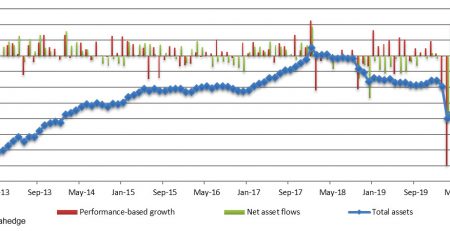 Economists, government planners and global decision makers around the world were shocked recently when the International Monetary Fund released two annual reports warning about a coming crisis. In their... Read More