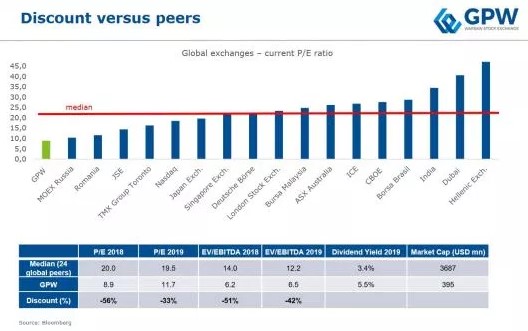 Brief write up of the Warsaw stock exchange. I found this and think it is a rather neat idea. It is currently a 5.9% portfolio weight.

Exchanges used to be considered an archetypal natural monopoly – it’s inefficient to transact across multiple venues – any investor wants to be where the liquidity and best price is.  The Internet changes this, as prices can be advertised electronically  / deals can be done across multiple venues, but it still isn’t quite that simple – there are things such as settlement, regulation, risk and habit which potentially make switching exchanges difficult.

The Warsaw exchange, or GPW is a very profitable organisation with a strong balance sheet that I think has been somewhat overlooked. To summarise, it has a PE of about 9, a yield of over 5%.  The balance sheet is very strong – it is a 1.7 PLN bn market cap company with 0.855 bn in tangible assets – allowing nothing for any intangibles – which for a business such as this is not a sensible thing to do.  Half the market cap is covered by cash / receivables / other financial assets – putting it on a cash adjusted PE of c5!

And it’s not like margins are weak.  They have net profit margins of around 40% and an EBITDA margin of 50-60%. They are also paying out (a little) – policy is to pay 60% of earnings in dividends.

The company is more diverse than you might think in terms of revenue and earnings streams – it shouldn’t really be thought of as just the warsaw stock exchange. The commodities which are another big part of the business are mostly electricity trading. 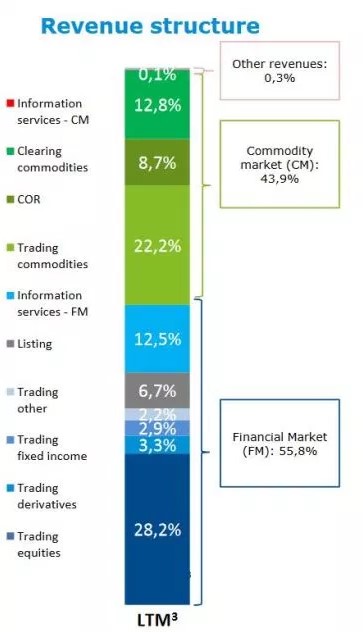 There are other positives.

They are cheap and are aware of it – this was posted in January:

The weaknesses to my thesis are that this lacks an immediate catalyst.  The votes are 51% controlled by the Polish government (they own 35% of the shares). Poland does go through phases of selling assets so it is possible these could be sold to another player or even on the exchange (though I doubt it at a valuation this low).

The big one is also that CBOE has entered the market (5th Nov 2018).  The stats they publish don’t show much of an impact as yet except, perhaps, in block trades which are massively down. This could prove a catalyst for a sale if they manage to get a hold.  They dont publish stats on their operations that I have been able to find.

The government stake might be a negative for many investors.  I like it, if I have to have a majority shareholder I would rather it be a state/government.  They are less financially motivated than most, they have a reputation they care about.  In the overall scheme of things this is a small amount of money for them.  This leads to the biggest risk – that nothing will happen for several years.  As long as they keep earning and paying out dividends I am reasonably happy to wait.

The value of main market trading is down 18.8% Jan – Dec.  But the index is down 9.5% over the period and, of the decline, 34% is block trades.  I would guess these were relatively low margin and I am not sure what has happened.  I would also draw attention to the strong growth in electricity trading – +129.5%

Competition has been seen across exchanges before – the London Stock Exchange has had competition for years but still a very nice business – they have moved from selling trades to selling more data.

As I conclude I would just like to emphasize how cheap this is.  A potential buyer could pick up / start to pick up a decent blocking stake at these levels, given the dividend, it could easily pay for itself / more than pay for itself.  The LSE has just issued bonds at a rate of 1.75%!

This can be traded directly on the Warsaw stock exchange – which I recommend as some of the earnings flow directly back to me via my holding in this or on the London exchange as a GDR (0P2A).  You can buy with Interactive Brokers or (I think possibly Saxobank). As ever, this is not financial advice.

Despite lukewarm expectations of a further rally in oil prices in the near term, hedge funds seem quite bullish on the sector. We mentioned record long bets from speculators... Read More

Negative Rates for a Negative Economy

posted by STEPHEN AUST, MARKETCYCLE WEALTH MANAGEMENT     I was surprised when Japan lowered their interest rates to negative territory on January 29, 2016.  I don’t think that anyone saw this... Read More

Of all the places where Dan Loeb could have raised a ruckus, he chose a teachers' union for his latest war of words. After this sensational start, lets tone... Read More