This may surprise people, but accounting isn’t a black and white endeavor—there’s actually a lot of gray area—particularly when you deal with accruals and estimates for future events. This is the reason that two very similar companies can report very different short-term results. What is the useful life of equipment from a depreciation standpoint? What is the eventual cost of environmentally remediating an oil well? What assumptions should you use for a pension fund’s performance and discount rate? Two well-meaning CFOs may come to two very different sets of assumptions. The assumptions used are often colored by the CEOs goals. Is the company trying to smooth earnings and play a “beat the quarterly estimate game,” or are they manipulating the numbers to create short term earnings for a capital raise? What if the business plan mostly focuses on a vindictive desire to squeeze the shorts?

Most accountants are, by nature, focused on accuracy and take the conservative route when offered two paths. However, when a corporate culture is based on pushing the envelope including; knowingly selling defective products that kill people, ignoring obvious workforce safety issues and cutting corners to hit aggressive Twitter boasts to promote the stock, you’d have to think that pushing on the financials would fit right in—at least no one dies when the numbers are inflated. 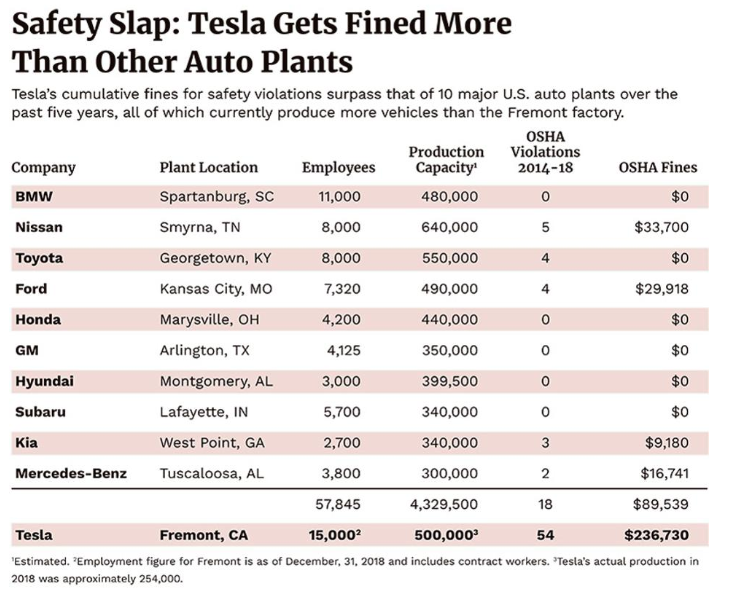 Tesla continues to gain market share in safety violations. They have more violations than 10 large plants in USA combined.

Fortunately, financial statements are numbers based. You can tease the numbers, review the estimates used and reach your own conclusions as to their accuracy and ulterior motives. Look at my Q3 Tesla piece if you want to get some clarity on how this is done.

With the 10-K now released, we get to look at new data. Take depreciation for instance. In 2018, they lowered the rate of depreciation on Model S & X tooling by 30% from 250,000 to 325,000. From the financials, it’s hard to tell exactly how much capitalized tooling was related to the S & X but it’s likely between $500 million and a billion as total year-end tooling at cost was $1.398 billion and we know that Model 3’s are mostly built by hand in a tent.

Ironically, the Q4 shareholder letter made a point of noting this increase in gross margin. Let’s just say cost reductions weren’t actually responsible for the change.

Of course, accounting works in funny ways, if these tooling assets were already depreciated by 50% at the time of the accounting change, then the reduction in depreciation cost per vehicle would be twice the magnitude (noted above)—at least for a few quarters. While this would adjust through the financials over time as new capital is added to the depreciable base, it does serve to increase GAAP earnings dramatically in the short run.

Let’s look at a bigger driver of earnings.

Apologies as that’s a lot of boring legal language, but it’s important for what follows. Servicing warranties is a major cost for an automaker. Naturally Tesla is pushing the envelope here as well.

Note the charge to provisions in the Q2 “big bath” quarter followed by the gutting of provisions afterwards.

Now, I’ll admit that this calculation isn’t the world’s cleanest number. There are solar systems and energy storage included here that have their own metrics, there’s a change in vehicle mix to include more Model 3 with a lower price point. I get all of this. However, a shift in vehicle mix shouldn’t move warranty cost by almost $600/car from the 2017 average of $2,409/car to the Q4 number and I’m pretty confident the mix in Q4 was quite similar to Q3, yet the accrual dropped by $400/car. Only deceptive accounting could do that—especially as Q3 was almost in line with prior accrual levels.

Thinking of warranty accruals in a different way, in Q4, Tesla spent $60.75 million on warranty costs or an annualized rate of $243 million a year or $486 per car based on approximately 500,000 cars on the road by year-end. Given that the warranty is 8 years on the battery and drive unit (the most expensive parts of the car), the 8-year cost would work out to an anticipated cost of $3,888 per car, yet Q4’s accrual for warranty of $1,833 would work out to only 47% of the actual expected cost. But wait, there’s more!! The average fleet on the road is around 2 years old today. If batteries and drive units are going to fail, it’s as they age, not when they’re young. $3,888 is the best case scenario for total cost—the likely cost is DRAMATICALLY WORSE!! I wouldn’t be surprised if the real number is well over $10,000—meaning that Tesla wasn’t profitable for the only two quarters that they claimed to be profitable. Is it any wonder that Tesla has choked off spending on vehicle servicing and it now takes months to get any parts for a car? Even while underspending on their warranty costs, they’re still under-reserved dramatically!!

This leads to the obvious question, “Kuppy, I get it, auto OEM calculations are convoluted and these guys are cheating a bit, but isn’t this a cash flow generation story now? Look at how cash generation has inflected positive in the past 2 quarters?” To that I say that they’re likely gaming the cash numbers too, just like with the accruals.

At the end of Q4, Tesla claims they had $3.878 billion of cash including restricted cash. At the end of Q3, that number was $3.123 billion for an average cash balance of $3.502 billion. During the quarter, they earned $7.348 million in interest income or an average rate of interest of 0.84% despite the fact that money market rates were in the mid-2s for the quarter. I understand that some cash is needed for operating the business and some is restricted or overseas but they’ve earned about a third of what they should have. Either they’re hopelessly incompetent at cash management, or that cash wasn’t really there all quarter and shows up only at quarter end due to some transaction designed to pad the balance sheet with cash. While the low interest income is not a smoking gun, it shows something just isn’t what it claims to be either. For a point of reference, in Q3, they had a blended 1.00% yield on average cash balances despite average prevailing interest average rates being lower during that quarter. Did they suddenly get worse at cash management or are they playing more games with the cash balances?

Ponzi Schemes are like sharks, as soon as they stop swimming forward, they drown. This is because well run Ponzi Schemes use accruals to hide costs in the present that only pop up in the future. If your revenue numerator is growing, your costs on the denominator side will stay constant or decline as a percentage of revenue as they’ve been deferred—leading to margin growth. When revenue slows or goes in reverse, the fraud collapses. When accruals catch up, earnings will always inflect downwards—that’s why it’s so important to watch what’s happening with revenues.

I can keep pointing to obvious issues with the numbers (don’t get me started on the VIEs or how they’ve been capitalizing their vehicles to shift them into PP&E to increase their earnings or how they’ve under-reserved for liabilities throughout their leasing assets) but this piece is long enough already. Tesla has squeezed the numbers as hard as they can be squeezed. Is there a bit more lemonade in there? Maybe. Once you’ve crossed the red line, you might as well keep squeezing until someone catches you. Tesla seems to be at that point today. Tesla had 2 CAOs quit last year; they’ve had 3 CFOs in as many years. Anyone anywhere near the numbers flees at the first opportunity. Clearly, the accountants think that the lemonade is already quite toxic.

Going back to the shark analogy, when revenue inflects negatively, these accruals will catch up with Tesla quite rapidly. Watch monthly vehicle sales. January was awful. February was worse. They just fired all the sales people—how can March be any better? Tesla is imploding. It’s over and it will soon become obvious to everyone. Before, as a short, you had to use logic against a well-orchestrated stock promote complete with highly manipulated numbers. They can’t fake the numbers as revenue declines and they can’t promote the stock with only bad news coming. I added even more puts and put spreads this Friday.

The Gigafraud is about to detonate!!!

Disclosure: Funds that I control own various long-dated put spreads along with shorter-dated puts 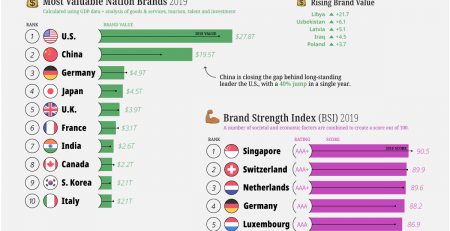 Ranked: The Most Valuable Nation Brands

Talent and capital are increasingly mobile, so a country’s image and reputation — its brand — can have a big impact on the country’s economic fortunes. Q3 2019 hedge fund... Read More

Tesla Motors Inc (NASDAQ:TSLA) may have an undisclosed investigation open with the Securities and Exchange Commission, according to Probes Reporter. However, analysts who are bullish on the automaker classify... Read More