Hedge Funds Up 0.86% In A Calm Month, Ahead Of Growth Forecast Cuts – ValueWalk Premium

The Eurekahedge Hedge Fund Index gained 0.86%1 in February, supported by the global equity market which continued to rebound over a potential resolution of the US-China trade friction. Hedge fund managers focusing on developed markets and Asia posted gains during the month, while Latin America and Eastern Europe mandates languished into the red. North American fund managers gained 1.46% during the month, while those focusing on Asia ex-Japan generated 2.77% returns. On a year-to-date basis, the two mandates were up 5.01% and 5.32% respectively. The market anticipation over the end of the trade war resulted in a strong boost for the Chinese equity markets, with most of the major Chinese equity indices recording double-digit gains over the month. The Eurekahedge Greater China Hedge Fund Index gained 7.04% in February, bringing its year-to-date return to 11.94% over the first two months of 2019.

Roughly 65.6% of the underlying constituents of the Eurekahedge Hedge Fund Index posted positive returns in February. Fund managers utilising equity long-biased strategies topped the table with their 8.03% gain over the first two months of the year, while on the other end of the spectrum long volatility strategic mandate was down 6.47% year-to-date as market volatilities remained suppressed throughout January and February.

Below are the key highlights for the month of February 2019:

North American fund managers gained 5.01% as of February year-to-date, recovering from the losses they suffered over the last quarter of 2018. The cautious tone of the Fed and anticipation over the US-China trade talk outcome as they entered the final phase of the negotiations helped equity markets gain during the month. The Eurekahedge European Hedge Fund Index gained 0.26% in February, as the risk-on sentiment among investors was dampened by signs of weakening growth. Asia ex-Japan mandate continued to rebound in February, as the US-China trade talk supported a strong rally in the Chinese equity markets. The Eurekahedge Asia ex Japan Hedge Fund Index was up 2.77% during the month.

Returns were mostly positive across strategic mandates in February. The commodity hedge fund mandate outperformed most of its peers with a 2.06% return over the month, owing to the strong recovery of oil prices, which resulted from OPEC’s production cut decision. Event driven and long/short equities strategies benefited from the upward movement in the equity markets around the globe and ended the month up 1.33% and 1.28% respectively. Fixed income fund managers gained 0.69% in February, as the dovish stance of most central banks from developed economies led to lower bond yield during the month. 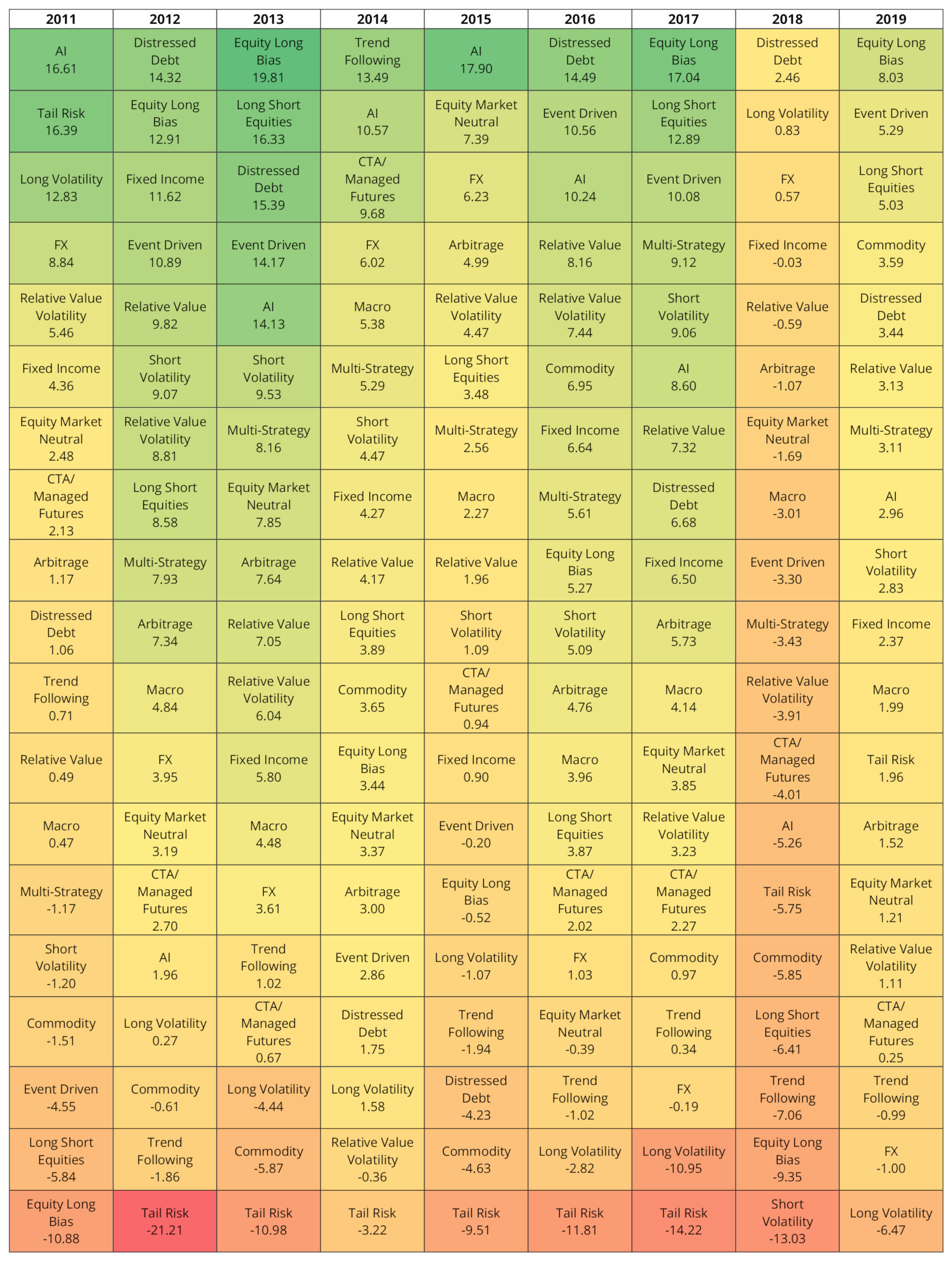 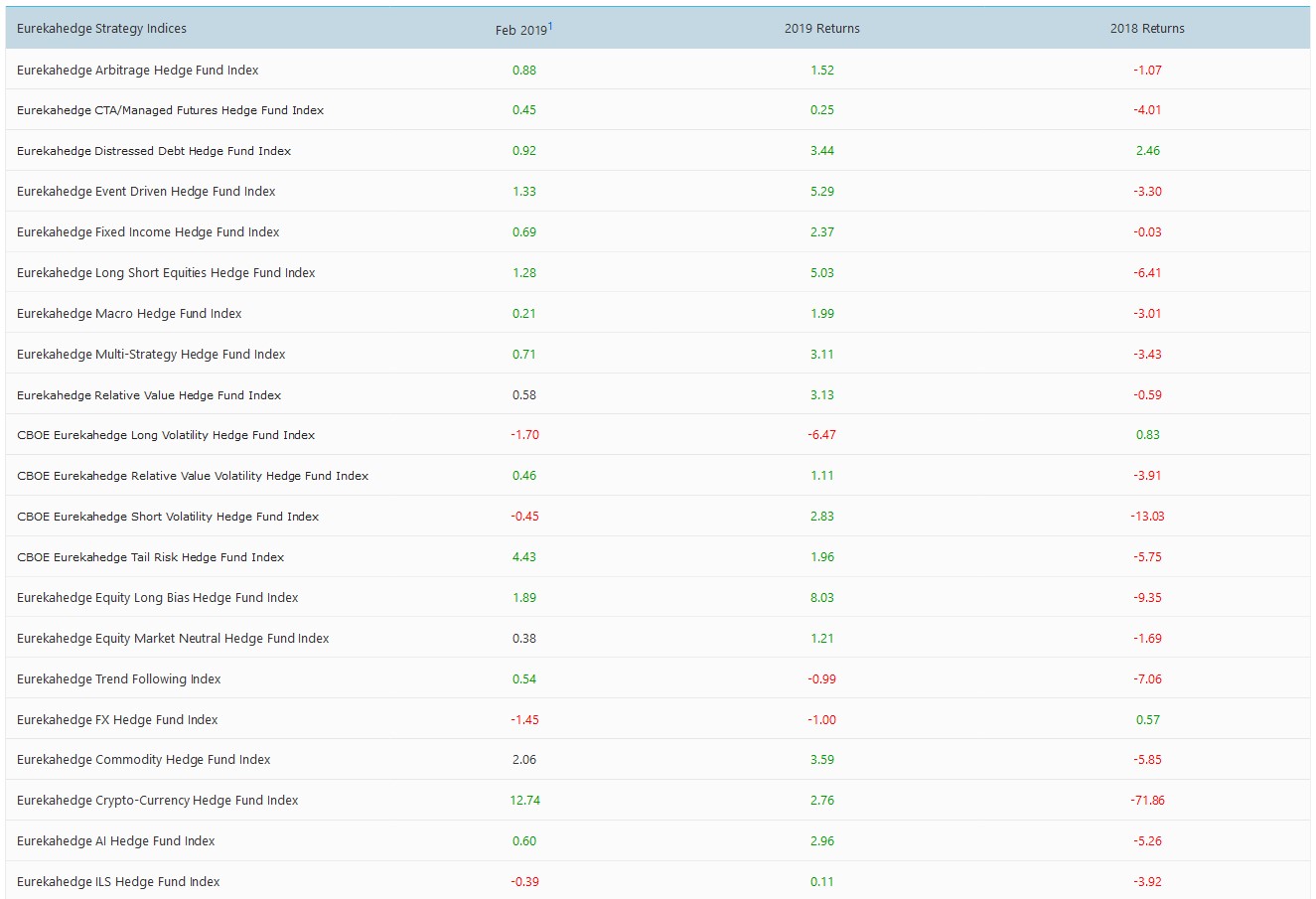 The stock market is not your friend. Instead, the market awakens a dangerous emotion — fear. Often we are too fearful to invest in stocks, or, having taken the... Read More

Here is an excerpt from brainpickings.org on the Benjamin Franklin effect: The surprising psychology of how to handle haters followed by a book review on You Are Now Less... Read More

In the past year, the word "tapering" inspired moments of panic in global financial markets. Tapering refers to the U.S. Federal Reserve's gradual retreat from the Quantitative Easing ("QE")... Read More

Why Did Yellen Talk Up Stock Valuations Now But Not In May?