Howard Marks is a legend in the world of distressed debt investing.

He is also the co-founder and co-chairman of asset manager Oaktree Capital Group (NYSE: OAK). As part of his role there, Marks publishes insightful letters on investing.

On September 26 of last year, Marks’ memo closed with this:

The market had peaked just four trading days before that.

Marks’ comments were also sage advice for all investing seasons: Cut your losers and let your winners run.

For investors like us, there is much to learn from Marks, Oaktree and its new partner…

This Is a Big Deal

You see, Oaktree just got a big boost: 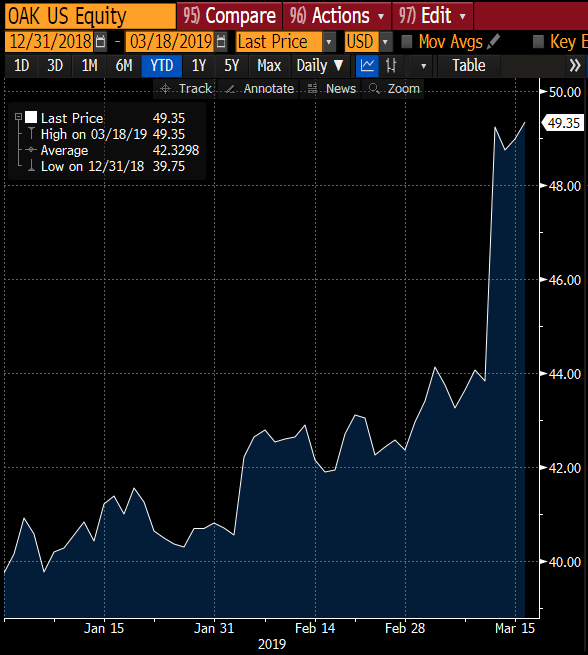 Make no mistake, though. Both firms consider this a partnership.

And the market likes the union.

In most deals, the buyer’s shares fall and the bought’s shares rise. But in the Brookfield-Oaktree deal, Brookfield’s shares are up, too: 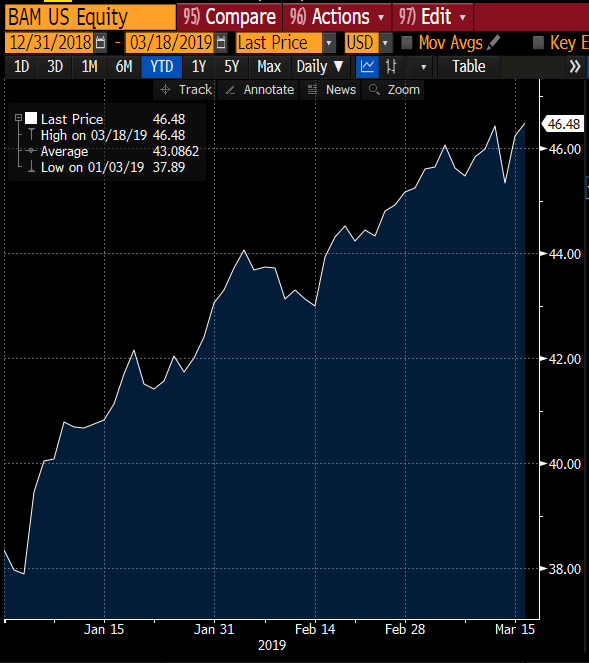 Brookfield will buy about 62% of Oaktree.

Marks, Co-Chairman Bruce Karsh and other Oaktree employees will own the rest. The Oaktree folks will continue to run the firm for now.

With more than $350 billion of assets under management, Brookfield was already one of the largest money managers in the world. The firm is 120 years old, too.

The combined firm — which I am calling the “new Brookfield” — will manage $475 billion of assets. It will generate $2.5 billion of fee revenue each year.

This makes the firm one of the leading alternative asset managers. (These firms manage assets other than traditional stocks and bonds.)

The beauty of this deal is the firms complement each other well.

Brookfield’s major business lines are real estate, infrastructure and private equity. Oaktree is known as one of best credit investors in the world, especially during times of market turbulence.

Pairing Brookfield with Oaktree’s credit platform is a great mix.

Citigroup’s William Katz says the combined firm will be a “global solution provider.” And I agree.

The complementary union of assets is great. But the best part of the deal is the union of the minds.

These two management teams were already world-class. Now they will be able to share insights in a manner that is mutually beneficial.

Marks will join Brookfield’s board of directors. The two companies both have a contrarian investing style. The ability to swap notes on what each sees in the market should benefit shareholders.

Brookfield owns a lot of real assets. These include:

The new Brookfield will partner with Marks et al. to protect these assets.

To discuss how they might do this, I return to one of Marks’ 2009 memos.

In it, he said: “In my opinion, there are two key concepts that investors must master: value and cycles.”

Value was in short supply in the mid-2000s, as we were near the end of the cycle. Marks said the years preceding the Great Recession featured “a steady rise in ‘willingness.’”

Among other things, investors grew increasingly willing to:

The era of increasing willingness carried many trends to higher highs.

Marks recognized this. Then, when prices fell, he and Oaktree put billions of dollars to work.

Buying at the bottom — or, in other words, having cash when it’s most needed — is a great way to become rich.

Today, we’re 10 years into a bull market. There’s no reason it must stop now. But I’m willing to wager it’s more than halfway done.

Given the brainpower assembled, I expect the leaders of the new Brookfield will work together to maximize value today and over the next few years.

Then, as its leaders have done before, it will protect its assets in advance of the peak and during the eventual drop.

Then put money to work at the bottom.

According to a new report released today by the Homes for All Campaign of Right to the City, the United States is in a new phase of the housing... read more

A senior finance ministry official said India would not be concerned if the rupee fell to 80 against the dollar after hitting an all-time low of 70.1 on Tuesday,... read more

Data is Useless Without the Proper Context – Keith Weissman

CTAs Break Their Losing Streak, Up For Two Months Now

The trends which were distinctly not in favor of the CTAs for most of this year, changed for the better in the past two months. Credit Suisse Managed Futures... read more