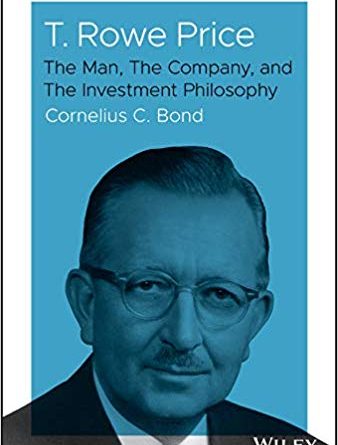 Cornelius C. Bond spent many years at T. Rowe Price, first as a technology analyst and eventually as president of the T. Rowe Price Growth Stock Fund. For almost ten years he worked directly with T. Rowe Price himself. In writing T. Rowe Price: The Man, the Company, and the Investment Philosophy (Wiley, 2019) he brought to bear the experience of an insider. 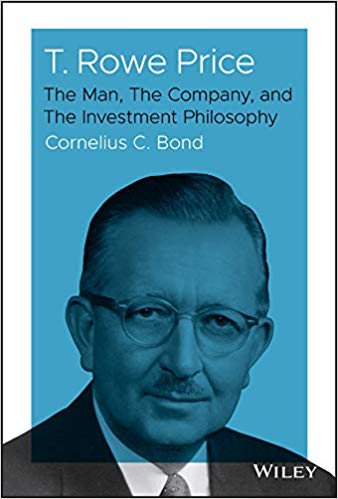 T. Rowe Price: The Man, the Company, and the Investment Philosophy by Cornelius C. Bond

I have no space here to summarize Price’s life or the trajectory of his firm. Instead, I will touch on the firm’s fragile beginnings and on Price’s investing philosophy.

In 1937 Price resigned from Mackubin, Legg & Co. (which later evolved into Legg Mason), where he had spent 12 years, because, he wrote, his goals were not in sync with those of the firm. The fact is that his investment management department was losing money. “Because of this (and perhaps Rowe’s personal ‘mannerisms’) he was not being given the financial and personnel support he had requested for his new department.” Moreover, his father-in-law had just died, leaving Price’s wife $130,000 ($2.22 million in 2018 dollars). “Here, suddenly, were the funds that could support the startup of his own company. His wife’s inheritance would allow him to go without a salary during the firm’s early years, as well as funding most of its early losses.” Indeed, the business was slow to take off. Revenues for 1938 were only $6,090, and by December 3, 1941, the firm had a mere $11.07 in the bank. It took a lot of fortitude to keep going.

In the early years of the firm, especially during the war, the market did not reward growth stocks. But Price remained convinced that growth stocks were the way to go. He defined a growth stock as “a share in a business enterprise which has demonstrated long-term growth of earnings, reaching a new high level per share at the peak of each succeeding business cycle, and which gives indications of reaching new high earnings at the peaks of future business cycles.”

Eventually Price’s growth strategy paid off handsomely. From its inauspicious beginning in 1934 to the end of 1972, when Price retired, assuming the reinvestment of all dividends, his model portfolio of growth stocks rose more than 2,600 percent in value. The Dow was up 600 percent over the same time frame.

Bond’s book helps flesh out our understanding of the investment management business in the twentieth century. It is a welcome addition to the literature.

Do you have a knack for non-fiction (or fiction) writing, well then Theranos might have a job for you! Theranos gets one more week to respond to the Centers for... Read More