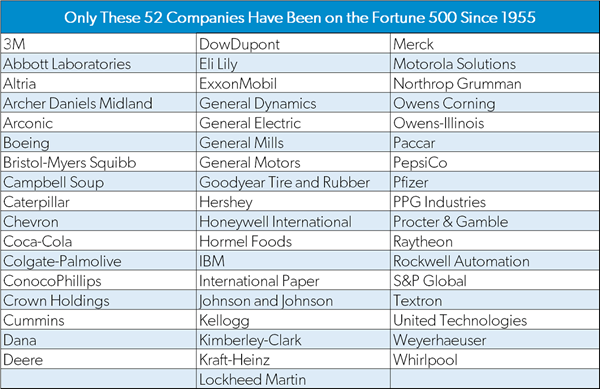 What do the companies in these three groups have in common?

For example, Avon Products was in the Fortune 500 last year, but it dropped to No. 501 this year—the cutoff to make the Fortune 500 this year was $5.575 billion in sales, and Avon’s sales were $5.571 billion. Many of the companies on the list in 1955 are unrecognizable, forgotten companies today (e.g., Armstrong Rubber, Cone Mills, Hines Lumber, Pacific Vegetable Oil, and Riegel Textile).

The fact that nearly nine of every 10 Fortune 500 companies in 1955 are gone, merged, reorganized, or contracted demonstrates that there’s been a lot of market disruption, churning, and Schumpeterian creative destruction over the last six decades.

It’s reasonable to assume that when the Fortune 500 list is released 60 years from now in 2079, almost all of today’s Fortune 500 companies will no longer exist as currently configured, having been replaced by new companies in new, emerging industries, and for that we should be extremely thankful.

The constant turnover in the Fortune 500 is a positive sign of the dynamism and innovation that characterizes a vibrant consumer-oriented market economy, and that dynamic turnover is speeding up in today’s hyper-competitive global economy.

According to a 2016 report by Innosight, (“Corporate Longevity: Turbulence Ahead for Large Organizations“) corporations in the S&P 500 Index in 1965 stayed in the index for an average of 33 years.

By 1990, average tenure in the S&P 500 had narrowed to 20 years and is now forecast to shrink to 14 years by 2026. At the current churn rate, about half of today’s S&P 500 firms will be replaced over the next 10 years as “we enter a period of heightened volatility for leading companies across a range of industries, with the next ten years shaping up to be the most potentially turbulent in modern history” according to Innosight.

Another economic lesson to be learned from the creative destruction that results in the constant churning of Fortune 500 (and S&P 500) companies over time is that the process of market disruption is being driven by the endless pursuit of sales and profits that can only come from serving customers with low prices, high-quality products and services, and great customer service.

If we think of a company’s annual sales revenues as the number of “dollar votes” it gets every year from providing goods and services to consumers, we can then appreciate the fact that the Fortune 500 companies represent the 500 companies that have generated the greatest number dollar votes of confidence from us as consumers—like Walmart (No. 1 this year for the seventh straight year with more than $500 billion in “dollar votes” again for 2019—the second time the sales of any Fortune 500 company has exceeded the $500 billion mark), Exxon Mobil (No. 2 at $290 billion), Apple (No. 3 at $266 billion), Amazon (No. 5 at $233 billion) and CVS Health (No. 8 at $195 billion).

As consumers, we should appreciate the fact that we are the ultimate beneficiaries of the Schumpeterian creative destruction that drives the dynamism of the market economy and results in a constant churning of the firms who are ultimately fighting to attract as many of our dollar votes as possible. The 500 top winners of that competitive battle in any given year are the firms in the Fortune 500, ranked not by their profits, assets or number of employees, but by what is ultimately most important in a market economy:the dollar votes (sales revenues) cast by consumers—the “kings and queens” who rule supreme in the marketplace.

This article was republished with permission from the American Enterprise Institute. 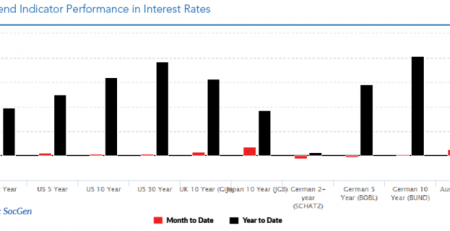 To date, the Patent Trial and Appeal Board has reached a final decision in eight instituted inter partes review (IPR) challenges, including seven IPRs filed by the Coalition for... Read More 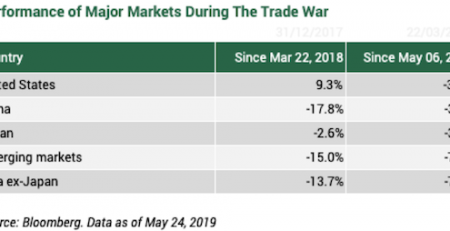 An argument soothing nerves over the current geopolitical standoff with North Korea is that rational leaders are going to avoid war. Such soothing voices point to the stock market,... Read More

When it comes to politics these days, most would probably agree that the nation is openly divided right now, especially since President Trump took the oath of office. Short Selling... Read More