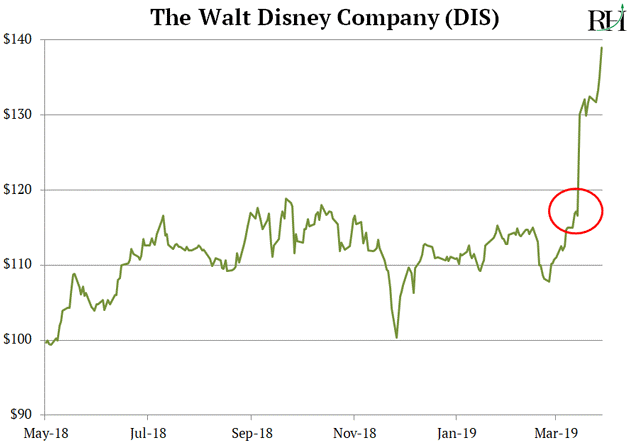 And Disney isn’t a small, medium, or even large company. It is a giant company. It’s the 18th-biggest publicly traded American company—bigger than Coca Cola, McDonald’s, and Wells Fargo.

Disney announced details of its new streaming service, Disney+, which will compete with Netflix.

If you’ve been reading RiskHedge, you know that I’ve been pounding the table to buy Disney stock for this very reason since last July.

My thesis was simple.

Netflix pioneered “streaming” where you watch shows through the internet rather than on cable TV. For years, it was the only streaming game in town. Early investors rode this first-mover advantage to 10,000% gains from 2008 to July of last year.

But nothing lasts forever. As I explained in my latest special report, disruptive companies go through cycles. Download The Great Disruptors report to find out my favorite disruptor stocks for 2019. Netflix is now what I call a “disruptor in decline.”

In short, big media giants like Disney were asleep when Netflix introduced streaming. It took years, but Disney has finally gathered itself and is fighting back.

Unfortunately for Netflix, It’s Not a Fair Fight

Disney is far and away the king of producing movies and TV shows people want to watch.

It owns Marvel, which is the most profitable movie franchise in history.

You’ve likely seen TV commercials lately for the spectacle that is Avengers Endgame.

It’s set to be the biggest moneymaker yet. Overall, it should surpass $2 billion in ticket sales.

Overall, it should surpass $2 billion in ticket sales.

Disney also owns Star Wars, which is the second most profitable movie franchise in history.

It owns Pixar Animation Studios, which continues to pump out moneymaking sequels to hits like Monsters, Inc., The Incredibles, Finding Nemo, and Toy Story.

It owns National Geographic, The Simpsons… not to mention all the traditional characters like Mickey Mouse and Donald Duck.

For Netflix, going up against Disney in a content war is just not a fair fight. It’s like a little league team taking on the New York Yankees.

To start, Disney+ will have 7,500 television shows and 500 movies, including practically every film your children and grandchildren will want to watch.

And Disney’s entire 2019 film slate will stream only on Disney+. It won’t be on Netflix.

So folks who miss Avengers Endgame in theaters will have to subscribe to Disney+ to stream it at home. The same goes for upcoming Disney hits Toy Story 4 and Frozen 2.

Disney Has Mastered the Art of Producing Profitable Blockbusters

Since 2012, 11 of the 16 highest-grossing movies in the world have been Disney productions.

Six of these 11 were Marvel movies.

Disney has never lost money on a Marvel movie, or even come close. Every superhero flick it produces is a sure bet to make hundreds of millions at a minimum.

You won’t be surprised to learn that six more Marvel movies are in the works.

How Much Would You Pay to Make Your Kids Happy?

That’s all Disney+ will cost. That’s less than half the cost of Netflix’s most popular plan.

Can you imagine how many parents will sign up? At seven bucks a month, what family with kids under 12 won’t subscribe?

Back in November, I Put a $170/share Price Target on Disney

The stock is already halfway there. I see it reaching $170 within 12 months. Within 3–5 years, it could easily double from today’s price of $135.

Streaming gives Disney a whole new way to monetize its movies and TV shows. Disney estimates Disney+ will have 60–90 million paying subscribers by 2024.

That works out to 12 million new subscribers a year for the next five years. That’s easily achievable. In fact, I predict Disney will beat it. Netflix has added an average of 20 million subscribers a year since 2014. Disney has far better content and costs half as much.

The case for Disney gets even better when you consider that it owns America’s #1 sports network, ESPN. It also owns a controlling stake in the fastest-growing streaming service, Hulu.

My research suggests it can attract another 90 million paying subscribers with these services, too.

Altogether, Disney should be collecting around $16 billion/year from streaming by 2024—up from zero today.

Another great thing about streaming is it allows Disney to cut out middlemen and retain more profit. That’s yet another reason Disney is a great buy at today’s price. 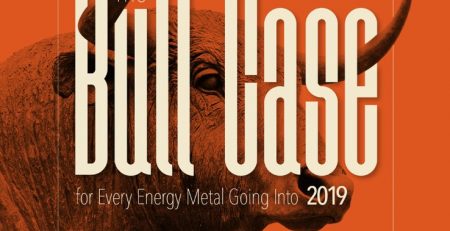 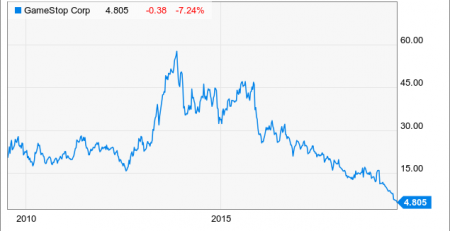 I’ve been following the retailer GameStop (GME) on and off for a couple years now. It’s trading at $4.80 a share with a market cap of $490m. The stock... Read More 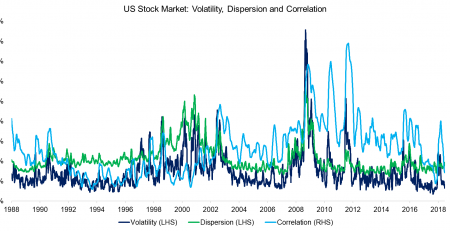 SUMMARY Higher volatility & dispersion imply higher stock market risks The relationship between correlation and risk is not linear However, these market technicals do not behave consistently across time Q2... Read More