Does Your Country’s Production Still Stack Up When You Consider Purchasing Power? – ValueWalk Premium

Beyond a country’s gross domestic product, economists also like to look at a metric known as purchasing power parity. Where per capita GDP shows roughly how much money individual people have, PPP demonstrates how much people can afford. PPP tries to give as much of an apples-to-apples comparison of what things cost in one country compared to another, controlling for factors like differences in currency valuations and inflation.

To paint a picture of how people are able to live, you need to understand not just how much money they have, but how much they can buy with that money. 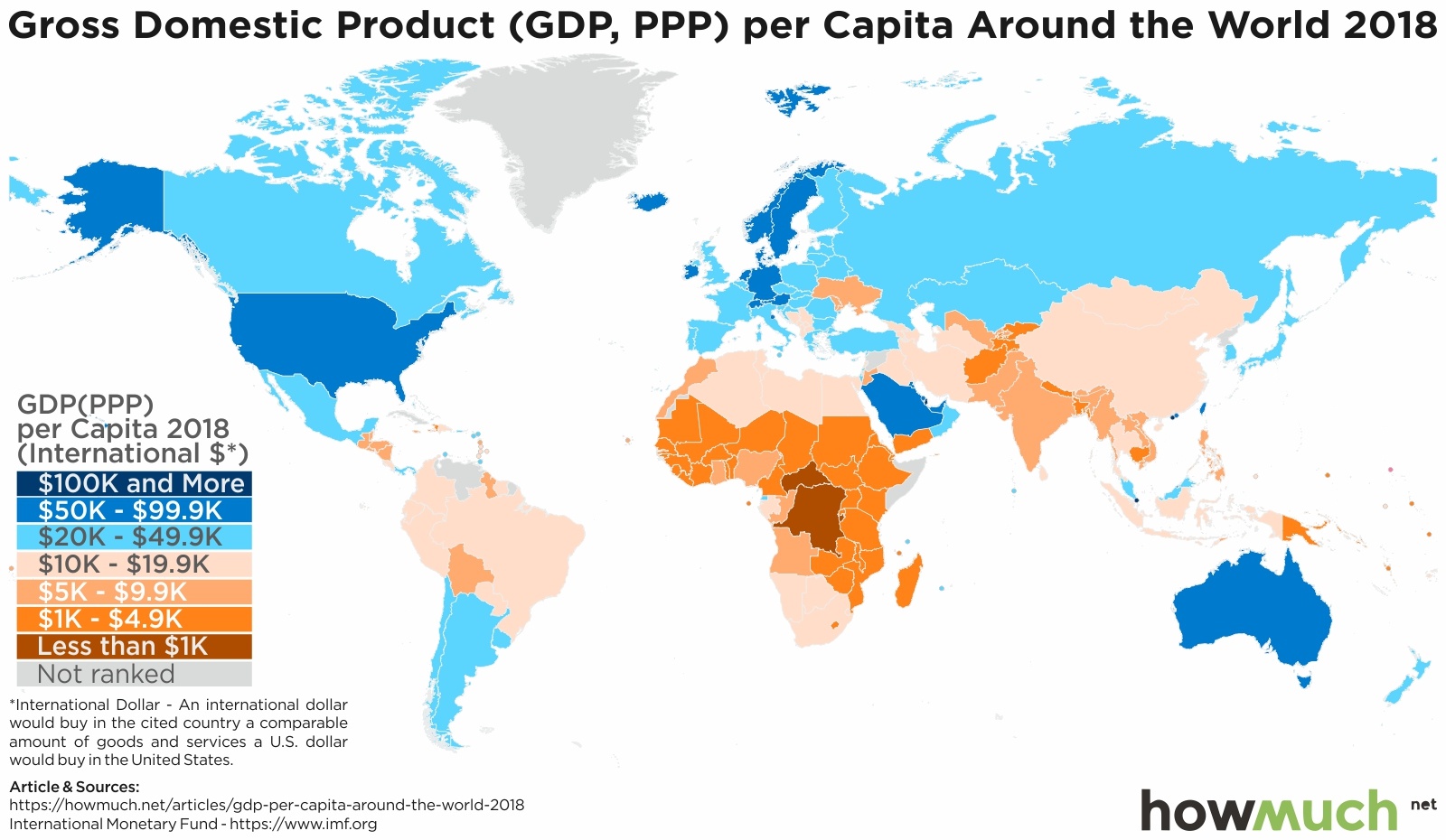 Looking at the world map of per capita GDP adjusted for PPP, you come away with two insights: The first is that, by and large, an individual’s purchasing power varies tremendously by region. And second, if you compare the PPP map with the per capita GDP map, you’ll notice that they do not reflect each other in any specific way. Some countries that have a lower relative GDP might have a higher PPP and vice versa. We’ll explore that more as we look closely at each region. 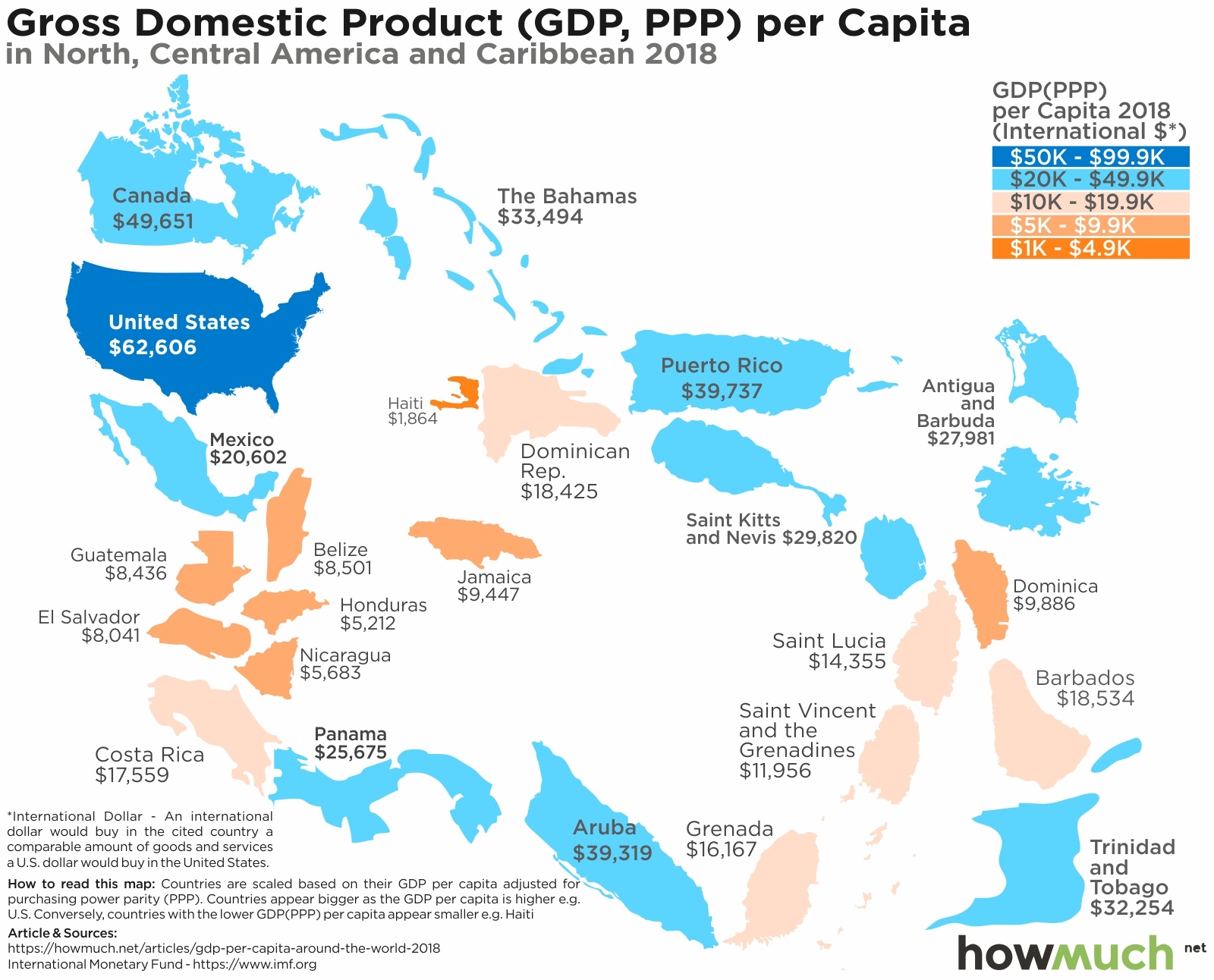 While the United States is the only North American country to earn between $50K-$99.9K in terms of GDP(PPP), it is not the only country in the region to claim one of the higher tiers. In addition to Canada, numerous Caribbean countries also have a GDP(PPP) higher than $20K. While there are still a number of countries that rank low, particularly Haiti, there’s more parity here than you might have expected.

If you looked at the per capita GDP map, fewer countries in North America rank in the higher tiers than in the GDP(PPP) map. For instance, Panama’s per capita GDP is $15,877, where its GDP(PPP) is $25,675.

So what does that mean? It means that while some countries in the region might have lower GDP and less overall money, goods and services are still relatively affordable for people who live there. This is a positive sign for the standard of living in those countries. 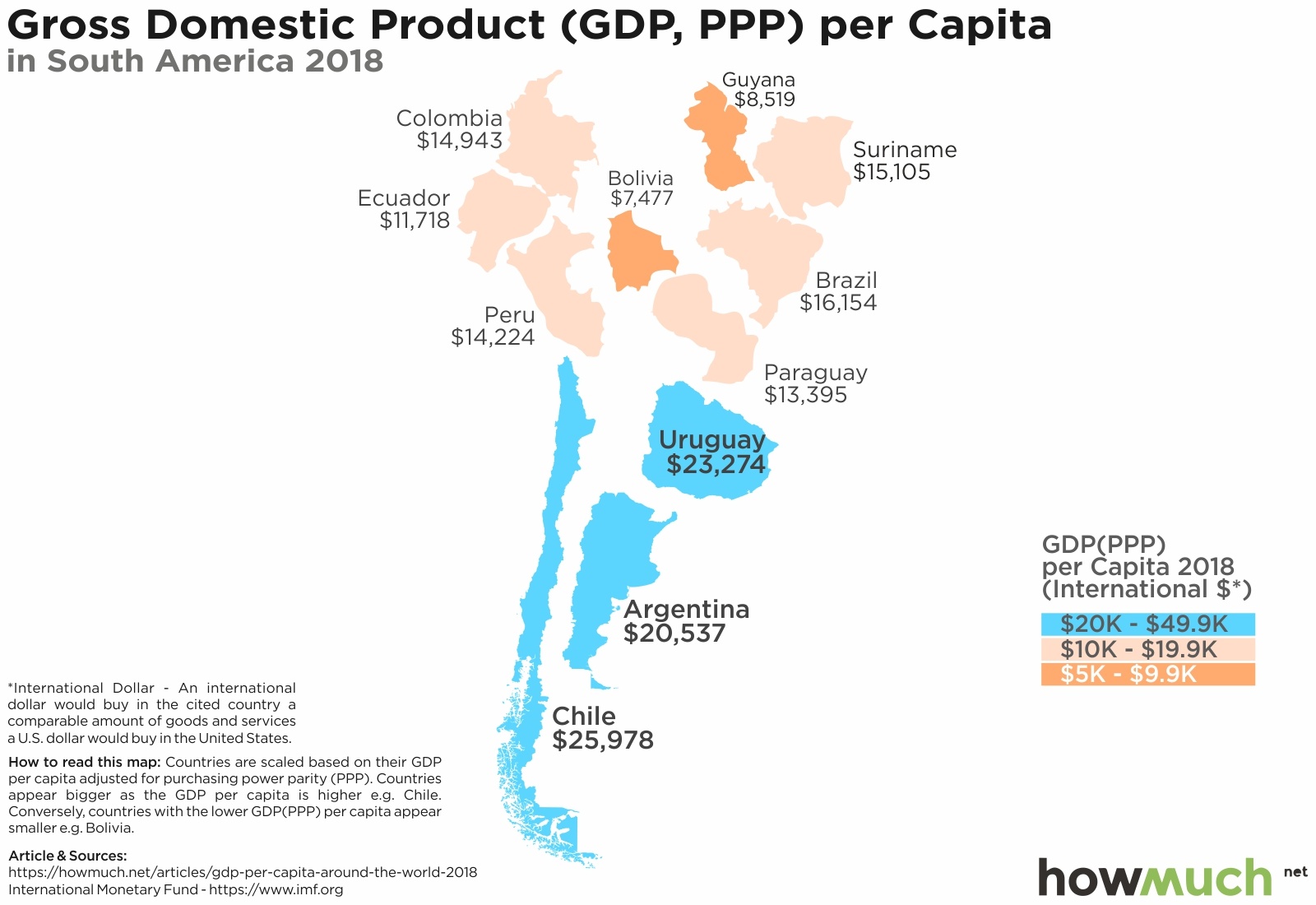 In terms of PPP, South America is split between north and south. Individuals in the southern countries have an easier time affording essential goods and services compared to their peers in the north. The rescaling effect of the map also helps illustrate the fact that, while Brazil might be a massive country with a relatively large GDP, when you zoom in on individual level, Brazilians are struggling to afford things. Even though Uruguay is a much smaller country, it’s slightly bigger in size on this map to demonstrate that Uruguayans have greater purchasing power. 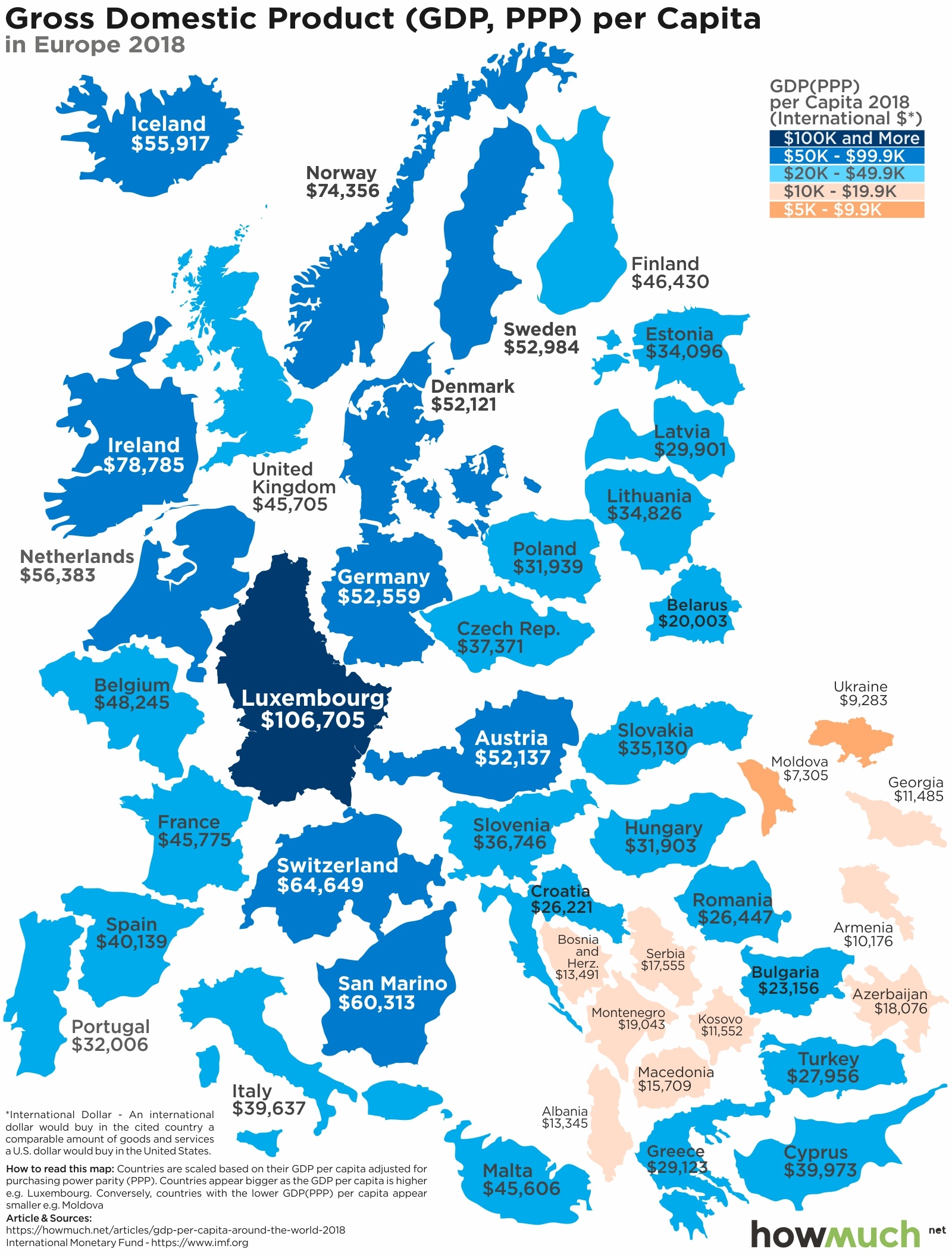 Most countries in Europe are relatively well off, particularly in Western Europe. In this map, Luxembourg again reigns supreme with a GDP(PPP) of $106,705. Ireland is second with $78,785. With Ireland’s booming technology sector and smaller population, it is able to maintain a high purchasing power and improve the cost of living for its citizens.

Eastern Europe continues to struggle. In addition to having low GDPs, essential goods and services are also relatively expensive in countries like Moldova, Ukraine, and Armenia. Some countries in the eastern part of the region, however, show dramatic improvements on the GDP(PPP) map. Turkey, for instance, jumps up dramatically when considering the affordability of life for people who live there. Despite a low per capita GDP, its GDP(PPP) is $27,956. 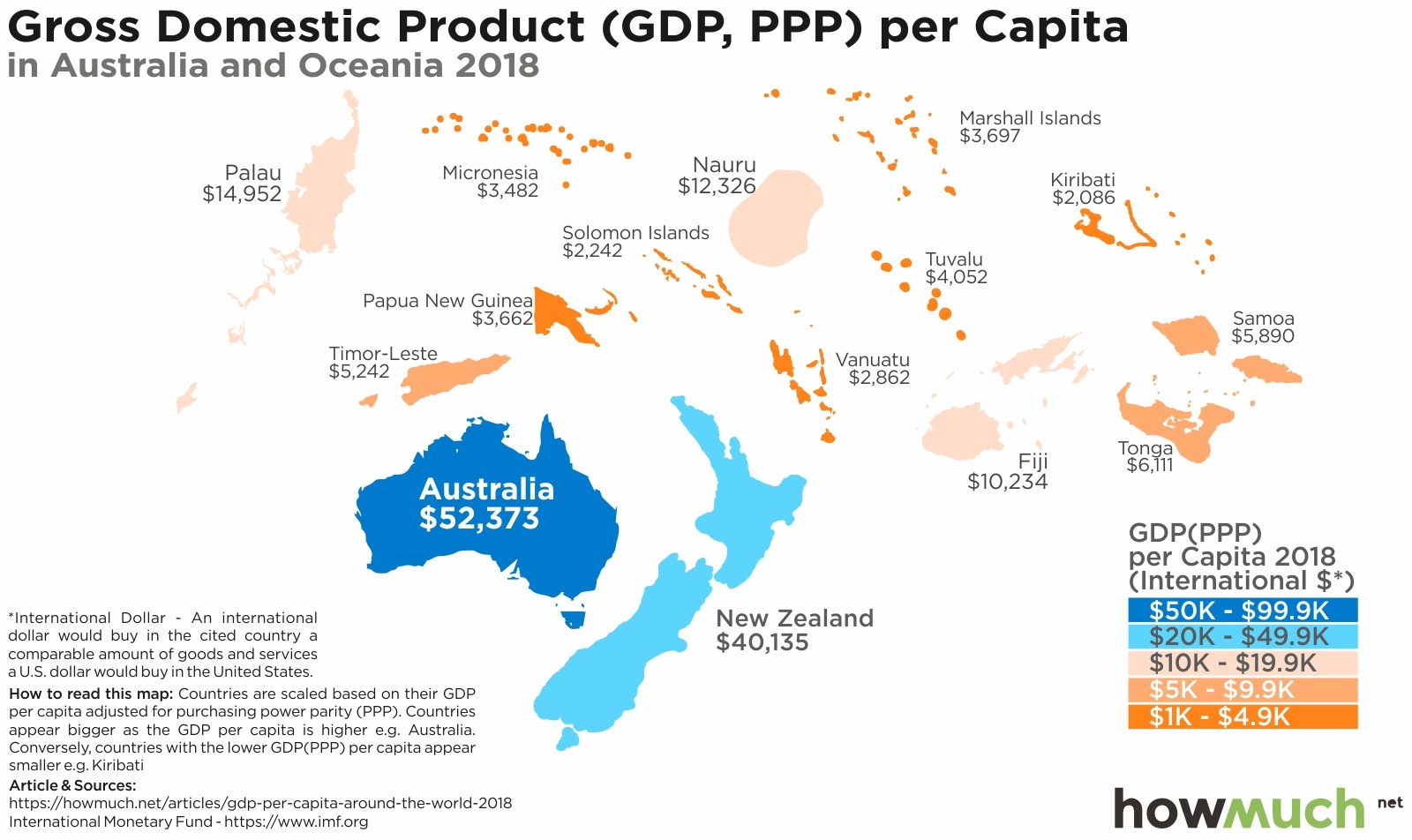 There’s a distinct lack of parity in Oceania. Australia is first with $52,373, New Zealand is second with $40,135. The next closest country is Palau at $14,952, more than $25,000 less than New Zealand. While the average citizens of Australia and New Zealand live in relative prosperity, residents in the rest of the region can struggle to access even the basics. 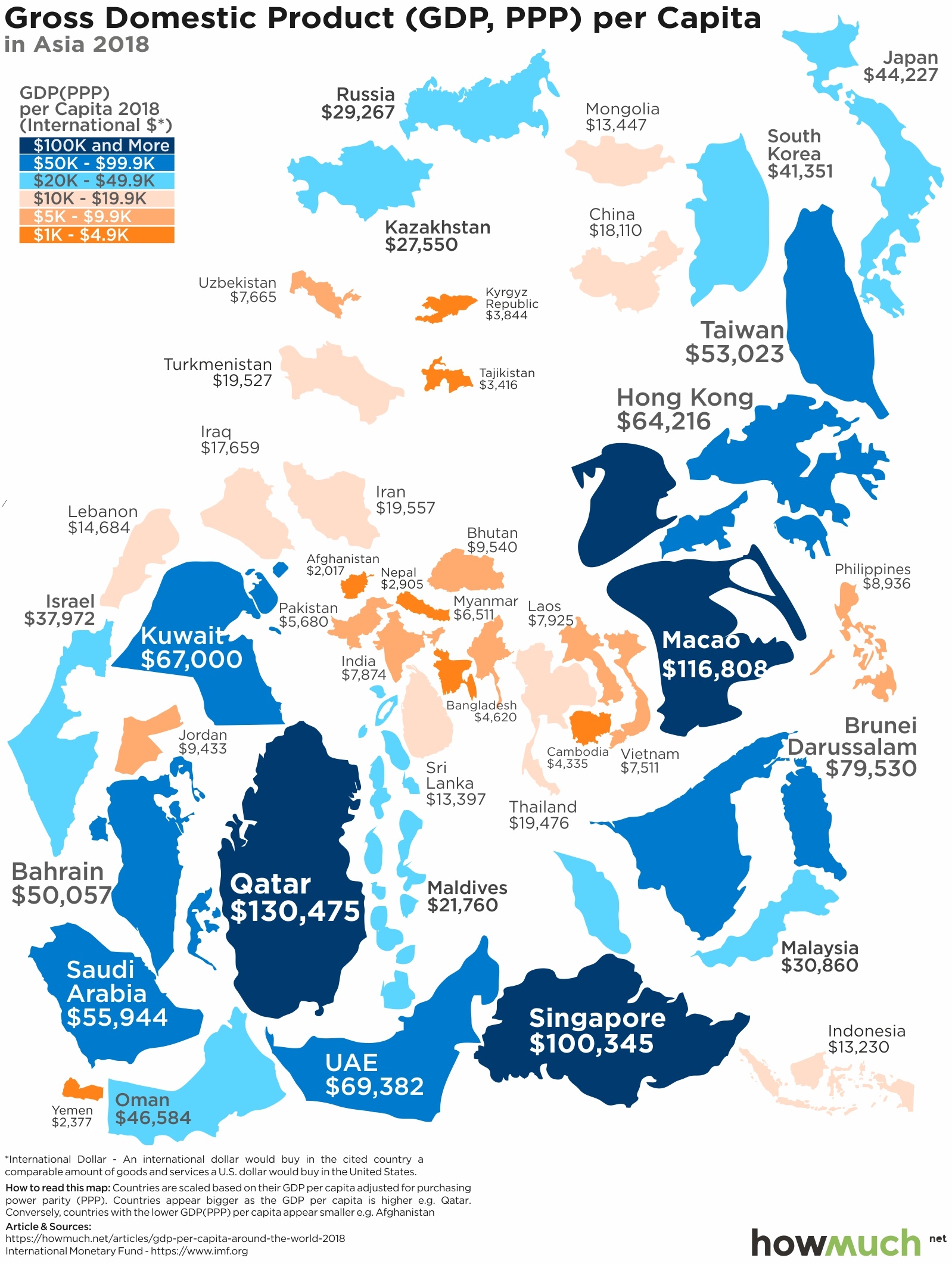 Asia is a mix of wealth and poverty. While countries like Qatar have strong purchasing power, other countries like Tajikistan have immensely low purchasing power. The disparity is even more dramatic considering how close in proximity some of the countries are. Whether they’re ravaged by war or they’re poor in natural resources, some countries in the region have low standards of living for their citizens because basic goods can be so expensive. 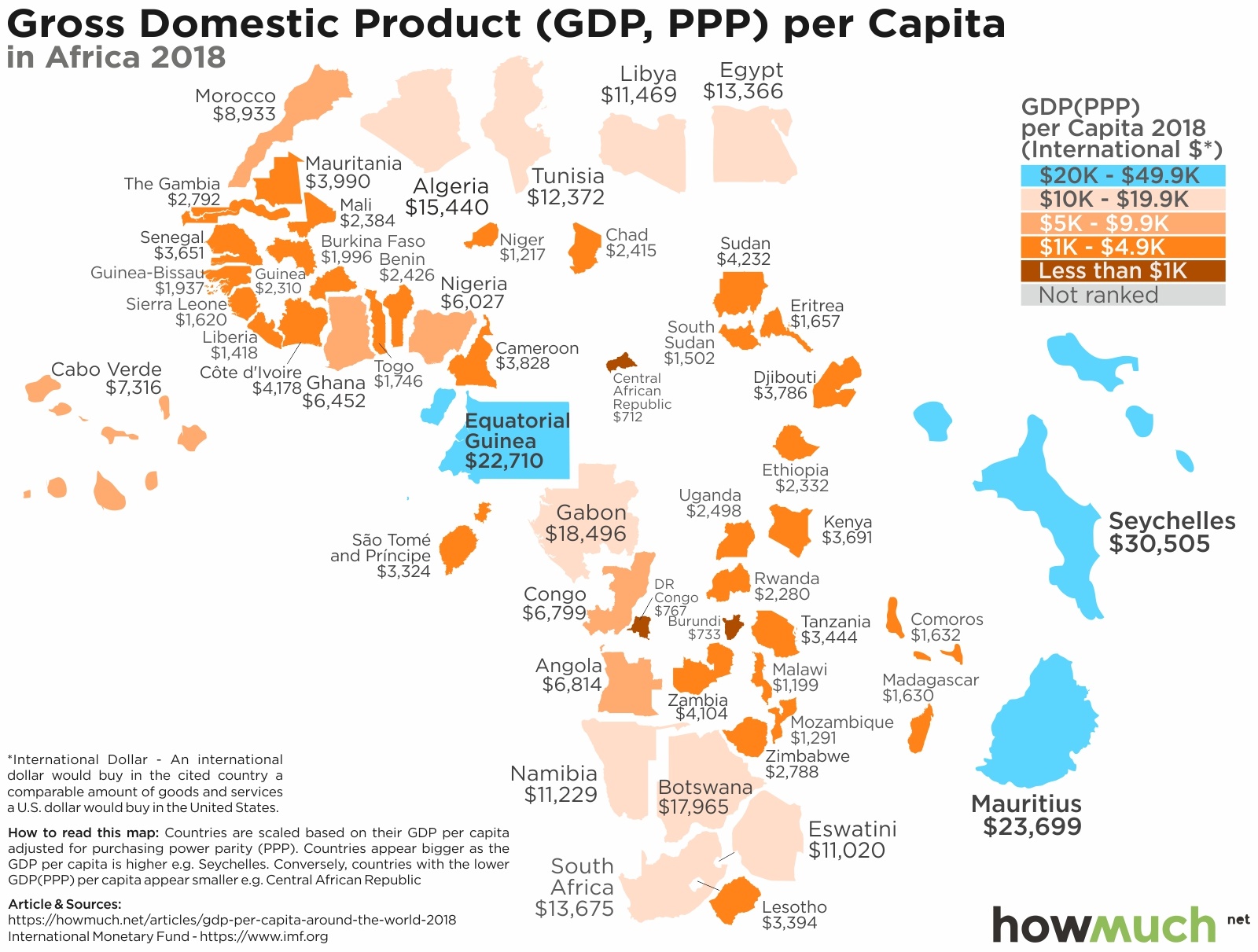 By and large, Africa as a region has low purchasing power. While there are some exceptions (Seychelles, Mauritius, and Equatorial Guinea), most countries in Africa have difficulty providing their citizens with affordable goods. There is some variation within the continent. Countries in the north and in the south tend to do better than the landlocked countries in the middle of the continent. And those smaller island nations with booming tourism industries also do better than other countries in the region. But by and large, average Africans have low purchasing power and, as a result, often have a lower standard of living. 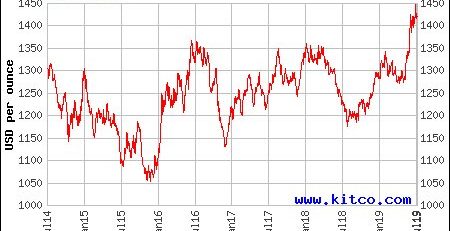 There has been a back-channel whisper conversation on the Greek economic situation on many levels. There is the derivatives story, which, if appropriate steps at the SWAPs insurance writers... Read More

GS: A VIX Below 11 Is A Reason To Celebrate Not Worry

Just because the VIX is under 11 there’s no reason to panic. Historically, a VIX reading under 11 has not preceded a market decline that’s according to a research... Read More