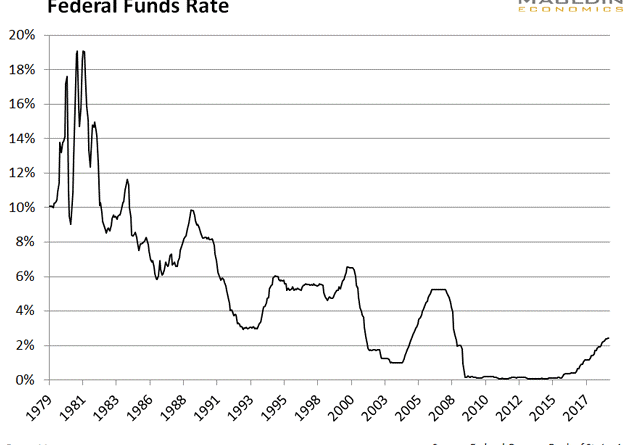 Looks like the Federal Reserve will cut interest rates soon.

Sure, the Fed announced it was leaving interest rates put last week. But I think the Fed will take this one step further and cut rates in the near future.

The Fed lowers interest rates when it thinks the economy is weak. This makes it cheaper for businesses to borrow money and employ more people.

And we’re already seeing signs of a slowing economy.

When the economy slips into a recession, which I expect to happen in the next year or so, the Federal Reserve will no doubt lower interest rates—just like it’s done after every recession since 1950.

I know this all sounds bleak.

But lower rates are actually great news for one type of stocks, which I’ll tell you about in a moment.

After years of near-zero interest rates, the Fed began raising rates in 2016. Then the stock market fell 20% at the end of 2018, and it abandoned this strategy.

It’s held rates steady ever since, as you can see in the next chart. 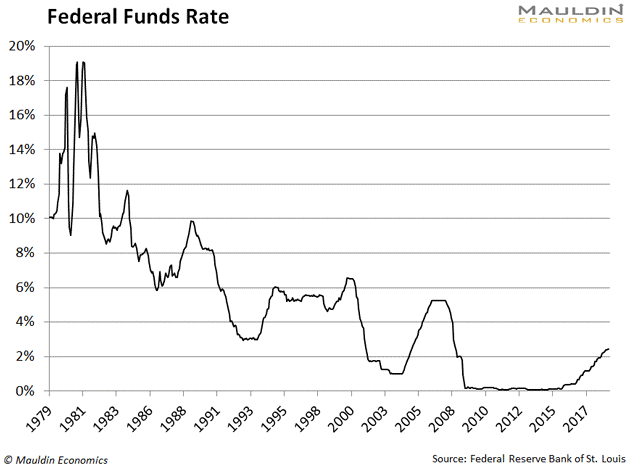 Right now, interest rates are less than half their long-term average of 5.2%.

John Williams, the former president of the Federal Reserve Bank of San Francisco, says this is the new normal. In recent interviews, he’s even advocated for keeping interest rates “lower for longer.”

If the economy continues to slow, as I expect it to, the logical next step is to cut interest rates. That makes now the perfect time to buy dividend-paying stocks.

As a general rule, CDs and bonds are less risky than dividend-paying stocks. But there’s a tradeoff—their yields are closely linked to interest rates set by the Federal Reserve.

That’s not the case with dividend-paying stocks. This can make them more attractive than CDs or bonds in a low-interest-rate environment.

And, the lower rates dip, the more attractive they get.

Dividend-Paying Stocks Already Have an Edge

Now, compare that to the 3.0% yield on Vanguard High Dividend Yield Index (VHDYX), which is a good proxy for dividend-paying stocks. 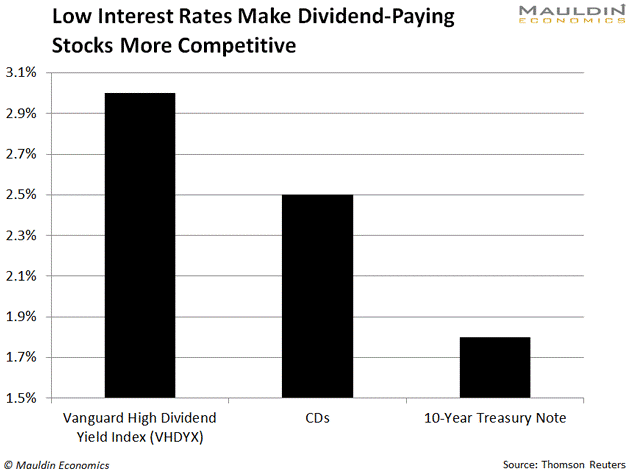 But what happens if the Fed lowers interest rates, as I expect it to?

Say the yields on CDs and the 10-year Treasury note fall 1.8% and 0.9%, respectively. That would make dividend-paying stocks nearly twice as competitive.

Lower Rates Will Boost These Three Stocks Most

I’m always on the hunt for safe and stable dividend-paying stocks.

Right now, I’m focused on a handful of industries that do particularly well when interest rates are low. This includes industries that require a lot of capital and debt. Low rates make it cheaper to borrow, which helps businesses in these industries.

The best example of this is real estate investment trusts (REITs). REITs own different types of real estate—everything from commercial warehouses to apartment buildings.

With interest rates low and heading lower, I expect money to flow into REITs.

Right now, my favorite way to invest in REITs is the Vanguard Real Estate ETF (VNQ). It pays a safe and stable 4.0% dividend yield.

See, utilities are as recession-proof as it gets. People and businesses pay their power bills no matter what’s happening in the economy or financial markets. So these businesses are very stable.

That’s why investors pour into them when interest rates are low, looking for a safe dividend yield.

Today, most people depend on mobile and high-speed internet access. So, these industries are very safe.

When interest rates head lower, I expect investors to pile in here, too.

All told, now is a great time to buy dividend-paying stocks, especially in the three industries I just mentioned.

Once the Fed pushes interest rates even lower, investors will start pouring in. At that point, you will have missed your best chance to buy.

It would be fair to say that Crispin Odey and the manager's funds had a mixed second quarter. For Q2 the flagship OEI fund returned -0.93%, OEI Mac ($) returned... Read More

IVA Worldwide Fund annual review for the period ended December 31, 2014. The performance of global equity markets was dispersed this year with U.S. equities performing well along with indices... Read More 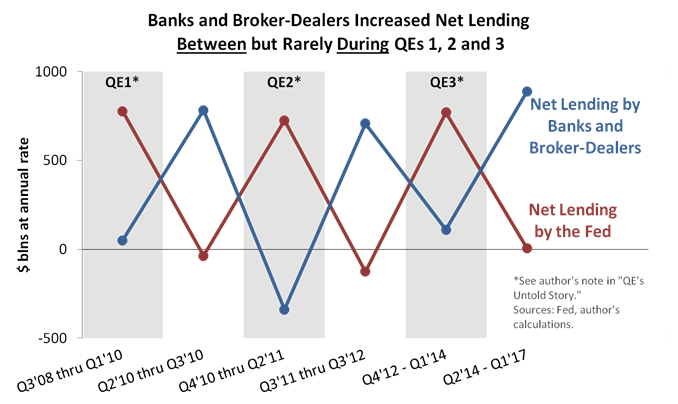 Altalis Capital Management, a well sepected small long/short equity hedge fund, outperformed with a 2.2% return in the first quarter of 2016, according to a quarterly update reviewed by... Read More 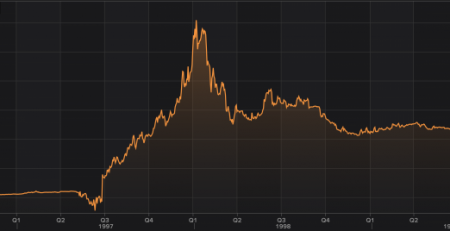