Want To Know If Your Portfolio Is Well-Diversified? Wait For A Crisis – ValueWalk Premium 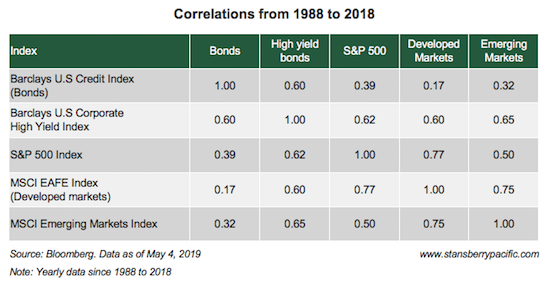 If you own some Singapore shares, an emerging markets fund, a U.S. ETF, and some bonds, you might think your portfolio is well-diversified. But it’s probably not.

A well-diversified portfolio will contain a mix of assets with low correlations. That way, when one asset or market falls, the other assets will hold steady or move higher to offset any potential (and hopefully temporary) losses.

A look at the historical correlations between different markets and asset classes (like stocks and bonds) shows that, over the long term, this generally works. (A lower number means the two assets have a lower correlation.) 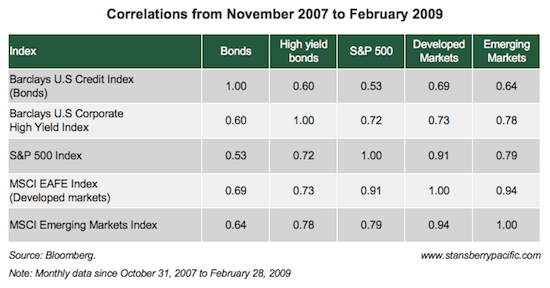 What happens to correlations when disaster strikes?

But when there’s a crisis, the usual correlation trends go out the window. Correlations between all markets and asset classes sharply rise, as shown for correlations during the global economic crisis (which we calculate here as from November 2007 to February 2009).

What the table above shows is that during a financial crisis, most investable assets move in the same direction – down. That’s because fear and uncertainty take the upper hand and investors tend to sell everything at the same time – whether it’s bonds or stocks, in developed or emerging markets.

The one asset every portfolio should hold

One investment will do better than most should another crisis hit – gold. As I’ve written before, gold is great portfolio insurance. Its correlation with all of the world’s major stock markets is very low. In 2008, when the STI fell 49 percent, the S&P 500 dropped 38 percent, and the global financial system teetered on the brink of collapse, gold prices climbed 6 percent.

In other words, a well-diversified portfolio should include gold. A good way to add it to your portfolio is to use an ETF, like the SPDR Gold Trust (New York Stock Exchange, ticker: GLD; Singapore Exchange, code: O87) or the Value Gold ETF on the Hong Kong Exchange (code: 3081).

The 60/40 Portfolio Is Riskier Than Ever

As investors we have to make assumptions about the future. We know they will likely prove wrong, but something has to guide our asset allocation decisions. Q2 hedge fund letters,... read more

Kyle Bass Ira Sohn coverage brought to you by ValueWalk. Kyle Bass is the founder of the hedge fund Hayman Capital Management. Kyle Bass is famous for his successful bets on subprime... read more 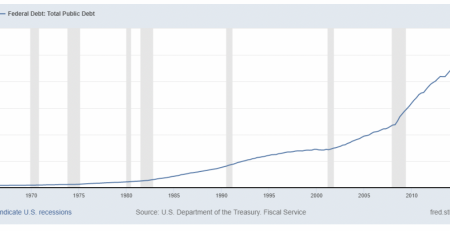 Which President Wins And Which Loses in the Year-over-Year Employment?

Which President Wins And Which Loses in the Year-over-Year Employment? The top-line month-over-month employment figure came in at +211K, a healthy figures, although a drop from the upwardly-revised October figure... read more

The Big Short: Inside the Doomsday Machine is a non-fiction book by Micheal Lewis about the build-up of the housing and credit bubble during the 2000s. The book was... read more