Equities Vs. Bonds: Who Is Right? – ValueWalk Premium

Since the start of 2019, the S&P 500 is up by an impressive 13.9%, including dividends. At the same time, bonds – as measured by a total bond market ETF – are up 6.2%. In other words, yields – which started falling during the fourth-quarter equity market correction, have continued to do so. In early October 2018, the U.S. 10-year Treasury yielded 3.2%. Today the same bond fetches a yield of only 2.33%. Bond yields around the globe have moved materially lower over the past few months.Ten-year German bonds are now yielding -0.11% and French bond yields are positive, but not by much at 0.3%. (Chart 1).

So here we sit, uncomfortably, with the bond market implying global economic growth may be decelerating faster and an optimistic equity market signalling things have improved materially since the year began. It is likely in the coming months that one of these markets will be proven right and one will be proven wrong.

Let’s put the 2019 equity rally into better context. The year started coming out of a very oversold market and there have since been three key equity-friendly developments: 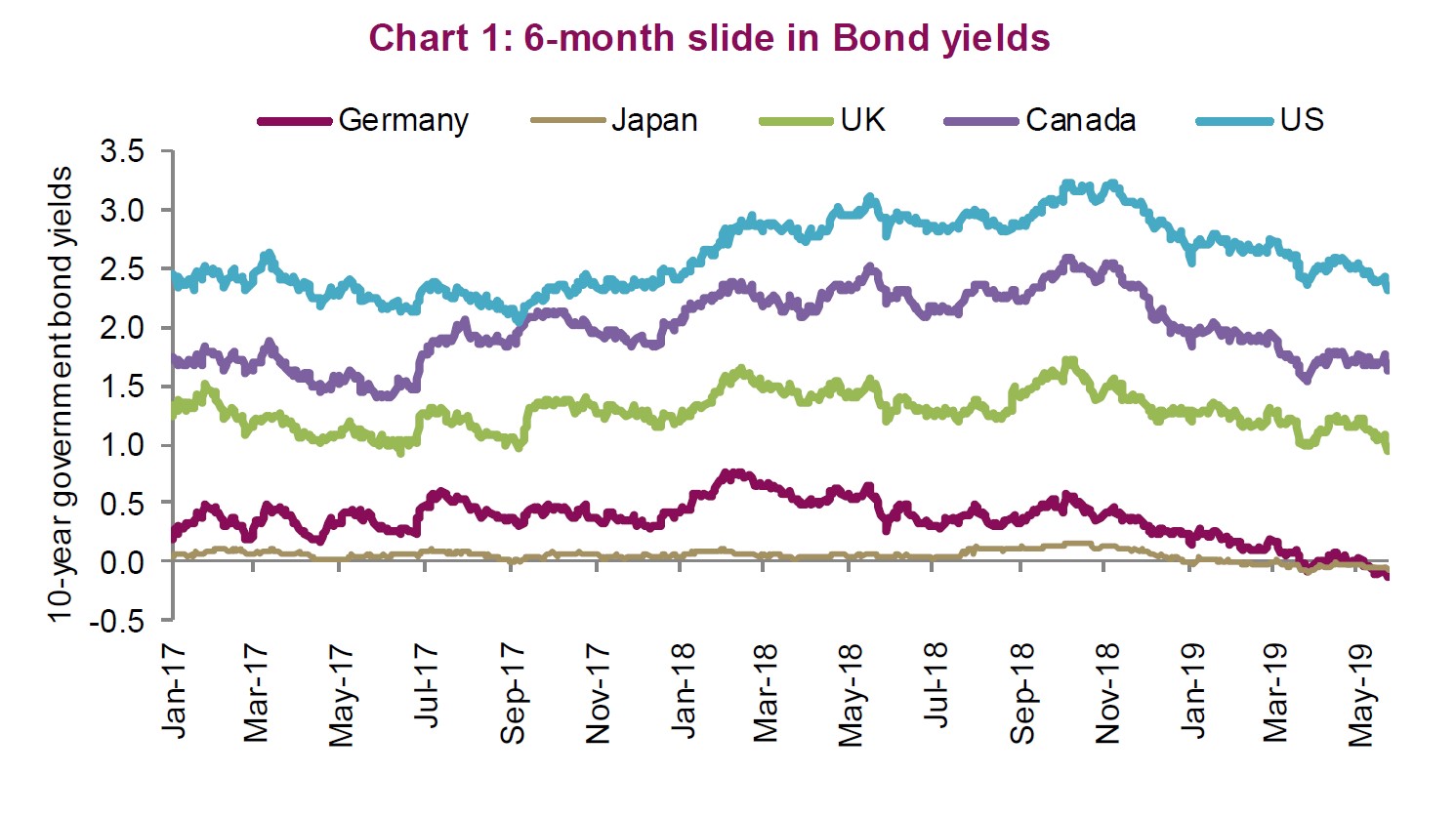 The issue now may be these tailwinds are pretty much played out. Valuations for the S&P 500 are now above 16x, so no great bargain there. We would be hard pressed to see the Fed become more dovish given very low unemployment. And while bond yields can always fall further, in doing so equity markets would likely pivot from welcoming lower yields to being overly concerned about slowing economic growth. 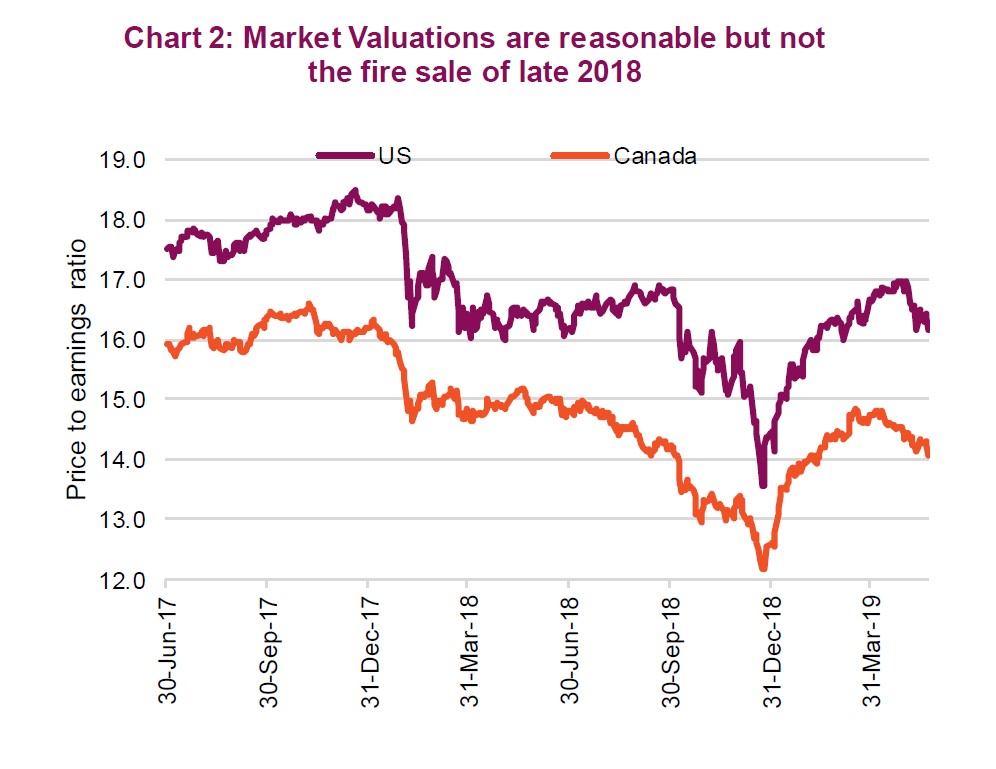 It is all up to the data now

With the previously mentioned market tailwinds largely exhausted, it may be up to the economic data going forward. Of course, the one big exception would be a rapid resolution to the U.S.-China trade conflict, but that is more of a guessing game than anything else.

If the economic data continues to decelerate, bond yields would continue to fall. While falling bond yields provided a positive influence on the equity markets initially, at this point the markets would likley view this as a negative due to growth concerns and the risk of slower earnings growth. 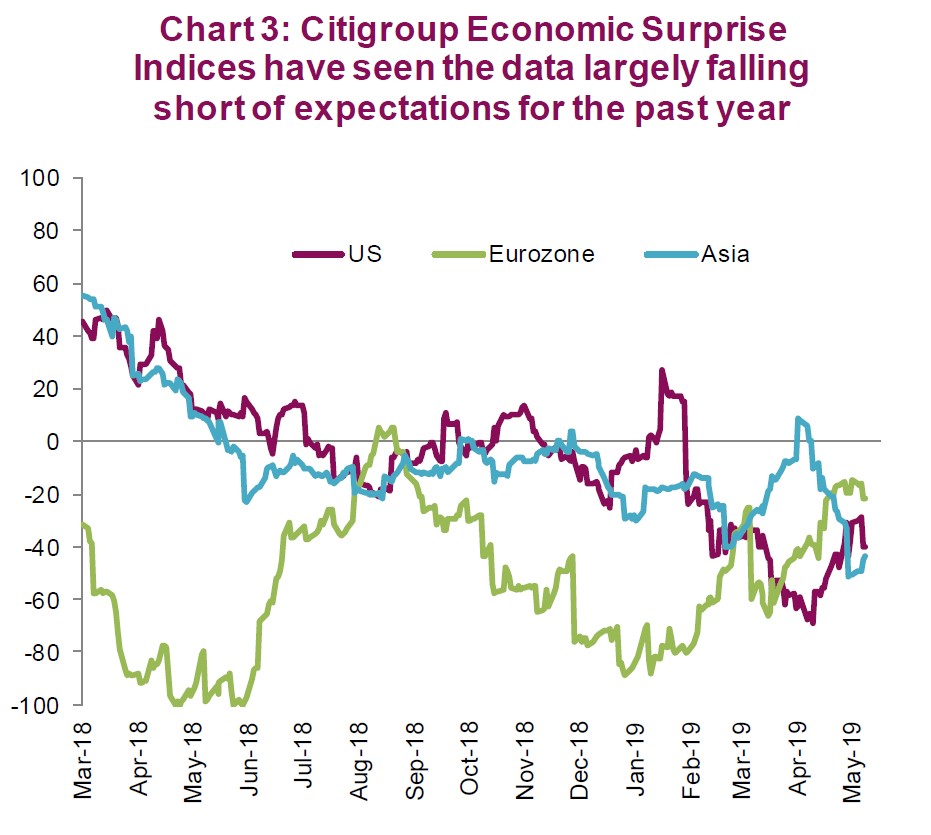 If the economic data improves, bond yields would likely grind higher. This would create a very strong tailwind for equities given stillreasonable valuations, yields rising from a low base and improving optimism for earnings growth.

Recent economic data has continued to disappoint (Chart 3). The Citigroup Economic Surprise indices for the U.S., Eurozone and Asia have been consistently below zero for much of the past year. And the data of the past few months has been generally worse.

The equity markets can likely hang in there for some time, weathering poor economic data. But it will weigh on confidence – an attribute not as plentiful today given the recent escalation of trade tensions. The next few weeks will be crucial with global manufacturing data releases, consumer confidence and labour reports. Sometimes economic data matters more than other times – this is one of those times. Long live all economists.

Which Commodities Will Benefit From Brexit? Buy gold but be cautious around oil and copper, that’s the main takeaway from Deutsche Bank’s special commodities report entitled “commodities weathering the Brexit... read more

British consumer retail giant, Tesco PLC (LON:TSCO), made at least two hedge funds richer with its recent accounting scandal. Tesco shares are down over 12% since yesterday, and it seems like... read more

In its latest study, based on 648 VP working at London investment banks, Emolument.com looks back at 2016 bonuses. M&A bankers did not benefit from their 2015 record deal volume yet, with bonuses down... read more

Activist investor and Donald Trump supporter Carl Icahn tells CNN's Poppy Harlow that "the minimum wage should go up," and getting "businesses to spend, and to build brick-and-mortar again,... read more

After commenting on the state of Big Oil's dividends, and net asset values, analysts at Oppenheimer have gone on to predict that the third quarter will see the worst set... read more

HSBC (NYSE:HBC) announced on Wednesday that it will be selling its insurance businesses in Asia and Latin America for $914 million.  This move comes after management has been trying to... read more 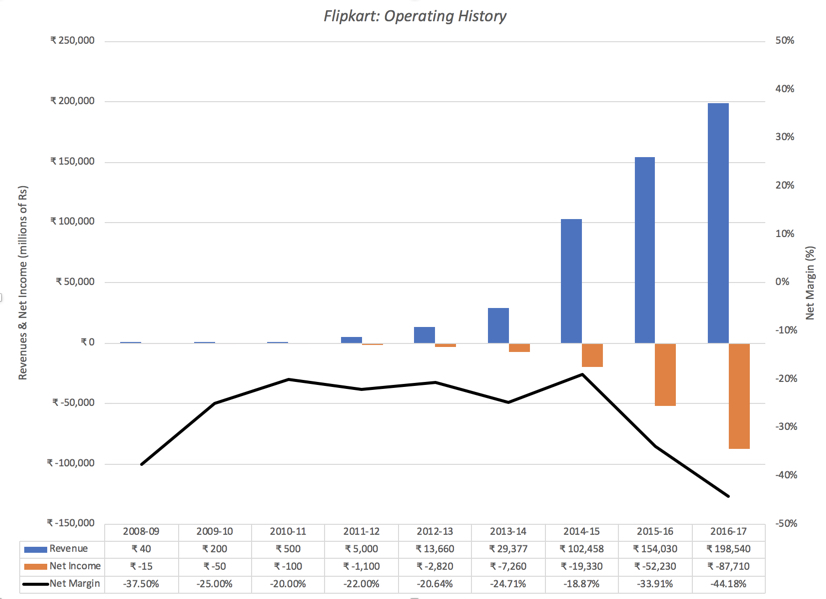