Gold has been a store of value for thousands of years and is sought for in times of uncertainty. It has not seen much interest following the European Banking Crisis in 2011. However, recently increasing geopolitical tensions, worsened global economic outlook, and US government debt, are all things that could potentially drive up the gold price.

There is something special about gold

There is usually a discussion around what type of investment gold is. Gold is not a cash flow-generating asset such as stocks or bonds. It is a precious metal with some industrial use, hence, partly a commodity.

But the “commodity demand” is only a small part of the total demand for gold. In another sense, gold could be seen as a collectible as people, for example, buy and hold gold jewelry. The Fed Chair from 1987-2006 had another view:

“Gold is a currency. It is still, by all evidence, a premier currency, where no fiat currency, including the dollar, can match it.” – Alan Greenspan

Gold is in our DNA

No matter how you classify gold, history shows that it has fascinated us for at least five thousand years. Though, pieces of natural gold have been found in Paleolithic caves dating back as far as to 40,000 BC. The Ancient Egyptians seem to have been first with smelting down gold, and the Mesopotamians appear to have been the first to make gold jewelry. The first gold coins are claimed to have been minted in the Kingdom of Lydia in 700-550 BC. So, from early on, gold has been used as money.

In modern times, the British West Indies adopted a form of gold standard in 1704 and is thought to be the first. International gold standards followed in the coming centuries and currencies were often linked to gold or gold and silver until Nixon decided to end international convertibility of the US Dollar to gold in 1971 and by that also put an end to the Bretton Woods system.

Benefits from adding gold to your portfolio

For your investment portfolio, what matters more, is the properties of gold and the impact it has on your overall portfolio. When we look at gold, we look at it as a separate asset. Gold is highly liquid, bears no credit risk, and can work as a true diversifier to your portfolio as it usually has a low correlation to other asset classes.

Gold is uncorrelated to equity 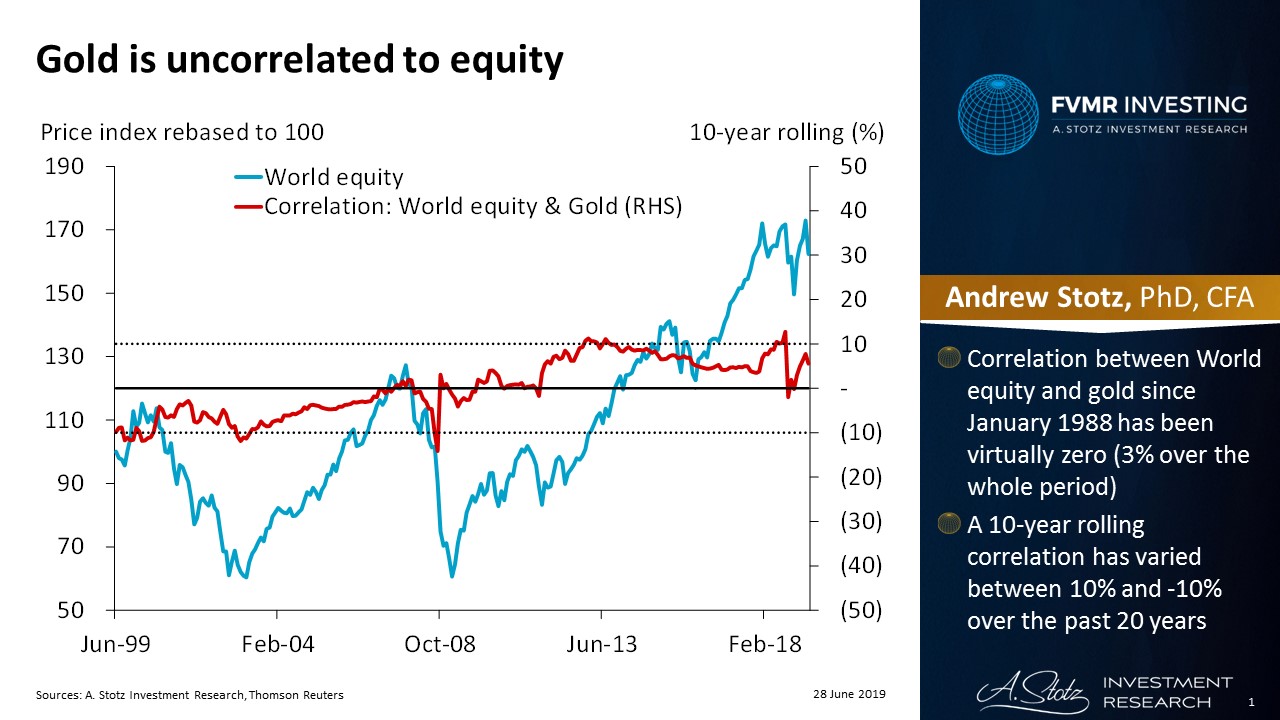 Looking at a 10-year rolling correlation, it has varied between 10% and -10% over the past 20 years, which means the two are uncorrelated.

The gold price goes up when equity price corrects 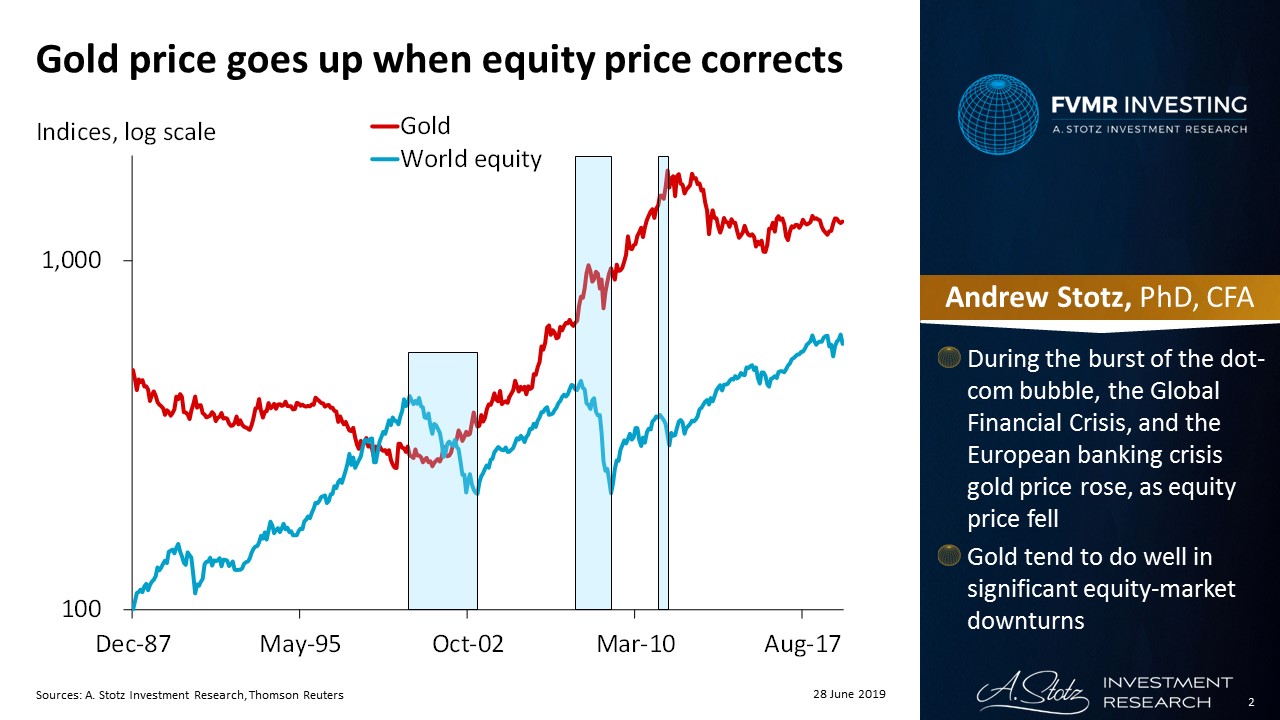 Plotting the price indices of World equity and gold we can see that during the burst of the Dot-com Bubble, the Global Financial Crisis, and the European Banking Crisis gold price rose, as equity price fell. Gold price tends to go up in significant equity-market downturns.

Store of value for thousands of years

Gold has been a store of value for thousands of years and is sought for in times of uncertainty.

“There’s something about gold. I’ve thought about this for a number of years, and I reached a blank. It’s almost as though, technically speaking, the ability of having a stable price, has great value.” – Alan Greenspan

During this long equity bull run and times of no inflation following the European Banking Crisis, gold hasn’t shown any exciting performance. However, the currently increasing trade tensions, worsened global growth outlook, US government debt, among other things, may attract more market participants to gold and start moving the price up.

Gold can work as a hedge and diversifier. If equity markets were to fall, the gold price could rise. At worst, it should store your value and is uncorrelated to equity.

There is a “mystery” on Wall Street, and it has to do with central bankers. No, the mystery has nothing to do with proposals for an independent overall of... Read More

“Davidson” submits: Q2 hedge fund letters, conference, scoops etc It is useful to note that the Value Investor Index does not adjust  w/rates. It is based on long-term SP500 EPS and... Read More

From our perch in Middleburg it looks to us like the market continues to absorb the often unpleasant news from around the world. Every so often the market has... Read More