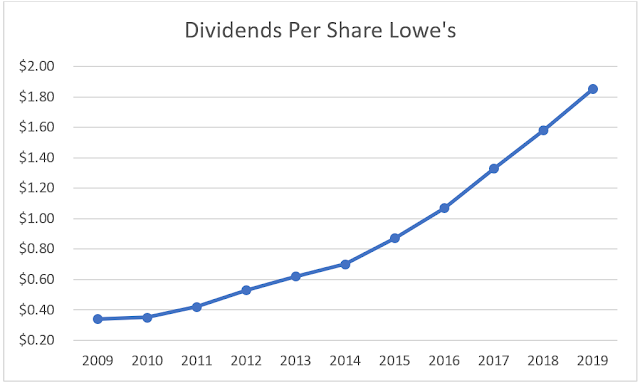 Lowe’s Companies, Inc. (LOW), together with its subsidiaries, operates as a home improvement retailer in the United States, Canada, and Mexico. The company offers a line of products for construction, maintenance, repair, remodeling, and decorating. Lowe’s is one of the Original Dividend Aristocrats from 1989.

Lowe’s is one of 26 dividend kings in the US. The company hiked its quarterly dividend by 15% to 55 cents/share just last week. This marked the 57th consecutive annual dividend increase for the dividend king. Over the past decade, the company has managed to increase distributions at an annualized rate of 18.40%.

The strong growth in dividends per share was aided by growth in earnings per share and the increase in the dividend payout ratio over the past decade. 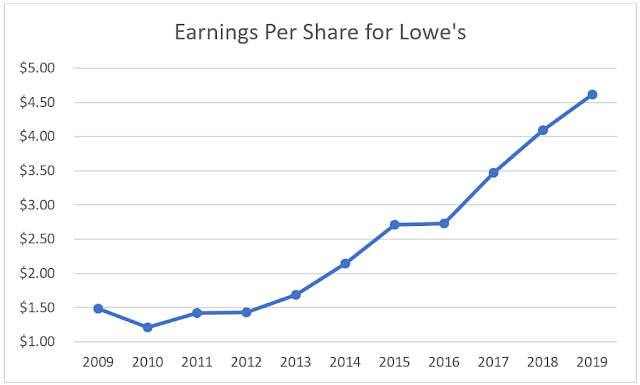 Earnings per share for 2019 have been adjusted upwards for a few one-time events such as goodwill impairment on Canadian Stores, impairment on company’s Mexico Operations, charges related to Orchard Supply Hardware, as well as charges related to US store closings for a total of $1.78/share.
Lowe’s is in the process of exiting its Mexico operations, closing Orchard Supply Hardware and closing underperforming stores in Canada and the US. Getting out of the ancillary businesses, closing underperforming businesses and concentrating on key operations in home improvement and enhancing the website functionality should help in focusing its efforts on key competencies. The company is working on a transformational initiative to improve stores, do a better job in inventory control, reign in SG&A spending, and improving supply chains. An increase in margins can improve profitability for each dollar of sales. It looks like the company will be relying less on growth through new stores, and more on doing better with the store base it already has.

The company’s fortunes are tied to the housing market in North America. A strong housing market will provide better sales over time. Growth in housing prices over time will provide a wealth effect, which can be transformed into higher spending on homes. As houses age over time, homeowners will spend more funds maintaining their places of living. Living in a house will tell you that the number of house projects never ends, as things break or get into the need for improvements, remodeling and renovations. An uptick in construction can benefit Lowe’s.

While the earnings growth during the past decade has been impressive, we should not forget that Lowe’s is exposed to the cyclical nature of the economy. During the past recession for example, earnings dropped from $1.99/share in 2007 to $1.20/share in 2010.

Lowe’s is second to Home Depot, which has slightly better store locations, higher margins, and a higher share of the professionals market. Better execution at Lowe’s can help in attracting more DIY customers and those from the Pro-segment. Investing in better customer service can pay dividends down the road, as better trained associates can broaden the moat behind the retailer operations. The ability to order online and pick-up in store is helpful in having successful online operations, while fending off threats from Amazon.

The company has been active on the share repurchase front during the past decade. The number of shares outstanding has gone from 1.465 billion in 2009 to 812 million by 2019. Most of the repurchases occurred between 2013 – 2019, when the share price was going up.
If the economy goes into a recession, I expect that Lowe’s will halt share buybacks, until the coast is clearer. 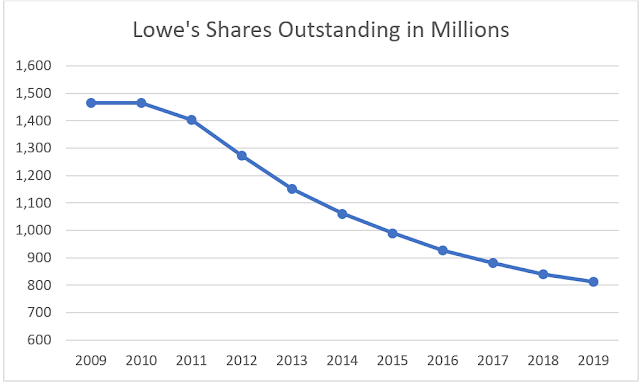 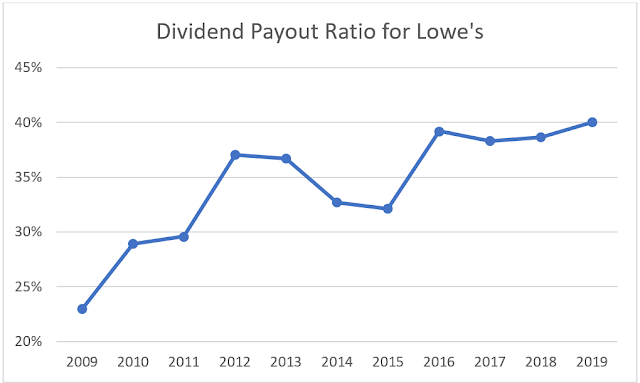 Right now, the stock sells for 17.50 times forward earnings and yields 2.30%. I find Lowe’s to be attractively valued today.