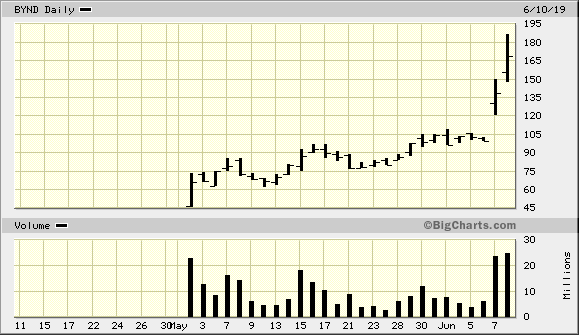 It’s the short squeeze of a vegan’s paradise. Shares of Beyond Meat (NASDAQ:BYND) jumped another 21% yesterday on an earnings beat, or really a loss beat, the company losing only $6.6 million on total net revenues of just over $40 million. The company now has a market cap of over $9 billion, and short borrowing costs keep rising. 51% of the company’s float is still being held short, which means the short squeeze can continue if the positions can’t be maintained, which would be especially relevant if the broader market starts to fall while Beyond keeps rising. There is about $800 million left in short positions on the stock. The short side is down about $400 million since January, while the stock is up about 650% since its IPO at $25.

Daniel [email protected]_IA QE is disinflationary because it perpetuates overcapacity and unproductive debt, yet it is massively inflationary on risky assets because the objective is to make rising government spending cheap. Hypernflation created in financial assets as sovereign bonds artificially inflated

The US Supreme today put a nail in Hank Greenberg’s crusade to hold the Federal Reserve Bank of New York responsible for unlawfully bailing out the insurer while engineering... Read More

Below is the first ever letter from Troy Marchand of Foundry Capital Group.  They launched a micro-small cap special situations fund June 2, 2015.  This is their 3Q 2015... Read More

Bill Gross's investment outlook for the month of November 2016, titled, "Populism Takes A Wrong Turn." The Trumpian Fox has entered the Populist Henhouse, not so much by stealth but... Read More

Dialectic Capital, like other short biased hedge funds has been taking heat from the booming equity markets. The hedge fund notes in a recent letter obtained by ValueWalk that... Read More

The IMF released an updated regional outlook today, raising the alarm over the pullback in lending by European banks in Asia. While the damage has been limited so far,... Read More