The global production of oil is driven by a host of complex factors, ranging from resource scarcity to a country’s access to the latest technological breakthroughs. 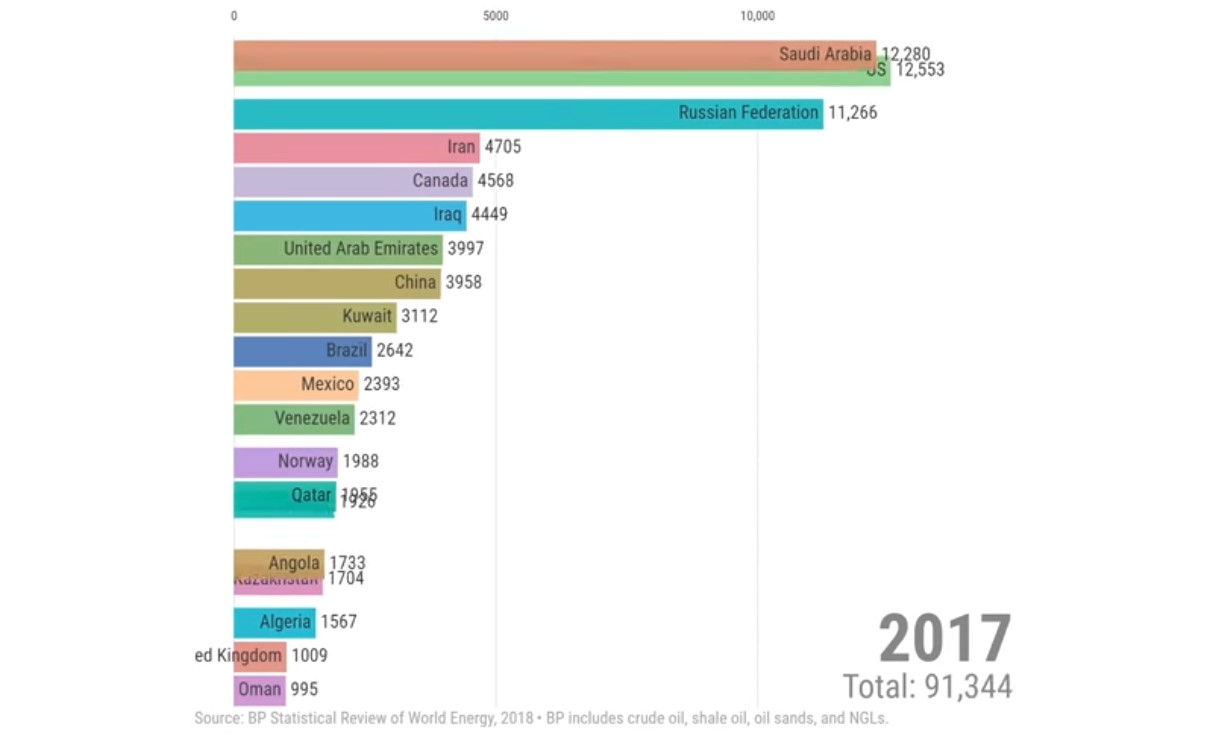 As these factors play out, the oil production landscape can dramatically change.

Countries can secure energy independence and global influence by rising up the rankings – or they can fall off the map completely, becoming a footnote on the global stage.

Today’s animation shows you how the oil landscape has changed, in terms of production by country, in less than a minute of time.

Data here comes from the BP Statistical Review of World Energy, 2018, which chronicles oil production by country all the way from 1965-2017.

The animation starts in 1965 during the height of the Cold War – a time when it was becoming incredibly evident that the ability to produce oil self-sufficiently would be a crucial advantage for any type of global superpower.

During this stretch of time, the United States was the undeniable leader in oil production, producing an average of 9.0 million barrels per day.

Put another way, U.S. oil production nearly double that of the entire USSR, or four times as much as the largest Arab producer (Kuwait), making this period a heyday of U.S. energy dominance.

According to the BP Statistical Review of World Energy 2018, here is how oil production has shaped up based on more recent data.

As you can see, there are essentially three superpowers that produce over 10 million barrels of oil per day: United States (13.1 million), Saudi Arabia (12.0 million), and Russia (11.3 million).

Together, these three countries combine for 39.1% of global oil production, and about 24.9% of the world’s proven oil reserves.

After this group, there is a significant dropoff: Iran (5.0 million bpd), Canada (4.8 million bpd) and Iraq (4.5 million bpd) each have a 5% share of global production, while the U.A.E. and China are next on the list.

In total, the top 10 producers of crude oil combine for roughly 70% of the global total – meaning the world’s other 183 countries added together produce just 30% of the world’s total crude.

The Chinese often operate in nuanced ways. Their central bank policies for influencing interest rates, for example, often use methods to influence interest rates that are not as clear... Read More