Visualizing The Wealthiest Billionaires Around The World In 2019 – ValueWalk Premium 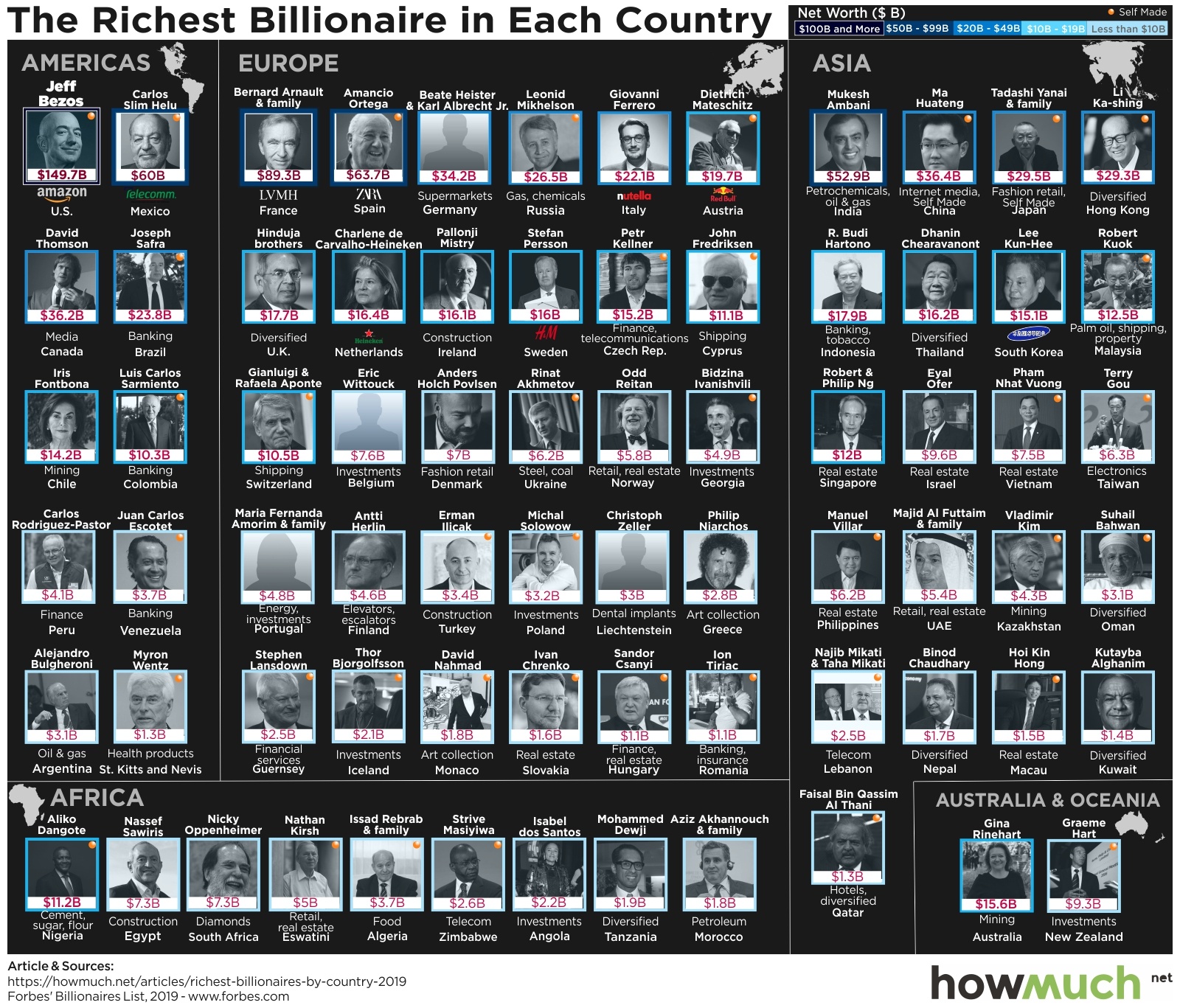 Our graphic takes data from the most recent Forbes billionaire list. The graphic shows the one richest person from the 73 countries listed. The image further groups the billionaires by their respective region (Americas, Asia, Europe, Africa), highlights the source of their wealth (i.e. Banking, Diversified, Mining etc) and their estimated net worth figure. Find out who your country’s richest person is below.

The list of billionaires is impressive with many of them touting international celebrity status. Looking at the makeup of these individuals based on their geographic location also highlights some interesting takeaways. Here is a breakdown of what industries created the most wealth in each region:

While knowing how billionaires become rich is interesting, knowing how they spend their wealth is more insightful. Philanthropy of the world’s wealthiest is big business. Some have been generous giving away nearly 1% to 2% of their net worth to date. The most generous are committing to giving half, if not all away.

The Giving Pledge founded by Bill and Melinda Gates, is an organization that seeks to convince the world’s wealthiest people to give away half of their wealth to philanthropic endeavors. To date, 204 people have signed the pledge from 22 countries. Notable signers include Richard Branson, Warren Buffet, Bill Gates, Mark Zuckerberg and others. In terms of the wealthiest from each country, none are on the list with the notable exception of Mackenzie Bezos. Bezos, the ex-wife of Jeff Bezos, has a net worth of $36 billion and has committed to the Giving Pledge.

The Giving Pledge has notable billionaires but none that top the wealthiest list from their respective countries. The pledgers tend to be couples and from North America which has the greatest concentration of billionaires in the world. The U.S. has more billionaires than China, India and Germany combined. As the world’s billionaire population becomes more global, one would hope that philanthropy also follows suit.

Thoughts on billionaires, their wealth or their philanthropic habits? Share with friends and leave your comments below.

The Oakmark International Small Cap Fund returned 3% for the quarter, compared to 6% for the MSCI World ex U.S. Small Cap Index. The Fund performed well in both... Read More